Dubai, a city in the United Arab Emirates (UAE) is known today as a trendy, cosmopolitan playground attracting millions of annual visitors. Located on the southeastern coast of the Persian Gulf, Dubai is both one of the UAE’s seven emirates (the equivalent of a principality) and a city within the emirate. The city is located on the emirate’s northern coastline. 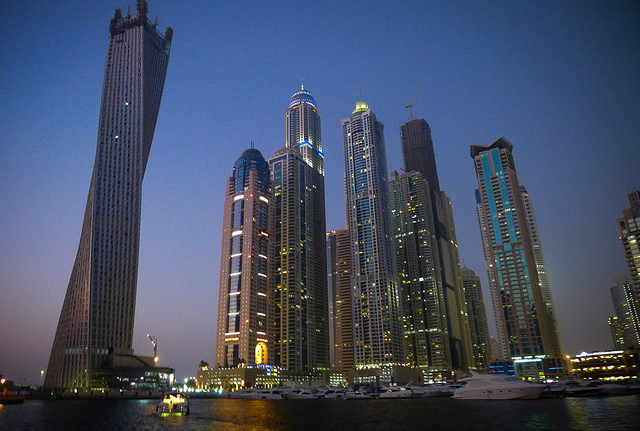 Dubai has the largest population in the country and after Abu Dhabi, is the second largest UAE territory. Abu Dhabi and Dubai are the sole territories yielding veto power in UAE’s legislature and thus have the ability to have a say in critical civic matters. The UAE’s style of government is a constitutional monarchy.

The earliest available record in the Book of Geography by Abu Abdullah al-Bakri, an Andalusian-Arab geographer, reveal a mention of Dubai as early as 1095, but records of settlements in the region only date back to 1799, meaning the real history of Dubai is relatively recent.

In 1833, Sheikh Maktoum bin Butti Al-Maktoum convinced his 800 fellow Bani Yas tribe members to establish what became the region’s Sheikdom. Dubai was incorporated on June 9th of that year. The Bani Yas were previously living in what is now a section of Saudi Arabia, but at the time was named the Second Saudi State.

The tribe remained in control of Dubai until 1892, when the United Kingdom signed an exclusive agreement with Dubai that protected the region against other nations with developing interests, including France, Germany, and Russia.

Dubai experienced tough times in the 19th century. An epidemic of smallpox broke out in in the Bur Dubai section of the region, forcing many to move to Deira in the east. Years later in 1894,  widespread fires in Deira destroyed the majority of homes in the area.

Dubai got its independence from the UK on December 2nd, 1971, after the nation left the Persian Gulf.

Historically, the bulk of Dubai’s economy came from the oil industry. For some time it was also active in pearl exports, but the effects of World War I and the later Great Depression irreparably damaged this industry. Because of it’s prime location, Dubai became an important regional port and trading location in the early 20th century.

Despite its current status as a renowned metropolis, Dubai was not immune to the damaging 2007-2008 financial crisis. This economic downturn negatively effected the region’s real estate market in 2008 and 2009, but it has since undergone a gradual recovery, aided in part by assistance from fellow emirates.

In recent years, the city has garnered world-wide attention for its popular sporting events and ambitious architectural projects, many of which include majestic skyscrapers and modern high-rises. Dubai is home to what is currently the world’s tallest building, Burj Khalifa, a mixed-use, 163 floor skyscraper which stands in at a height of 2,717 ft.

The enormous, swanky shopping malls, lovely parks, and popular sporting and entertainment venues attract tourists of all ages and from all backgrounds from across the globe. Dubai has ranked third best in its taxi services, following Tokyo and Singapore. Hotels in Dubai are plentiful and accommodate every budget (if you’re looking for the utmost in luxury, however – look no further than Burj Al Arab.) A vacation in Dubai will guarantee zero shortage of things to do and places to see – you may even spot a celebrity or two!

Top Destinations in Greece
London Attractions, on a Budget
The Best Attractions in Singapore