If you have been keeping up with me for the past two months (come on, I know you checked in at least every of couple days to see what I was up to…right?), you would have noticed I’ve been ambling my way through southeast Asia. But, unfortunately the time has come  for me to head back to my mother land. You know that too-big-for-its-own britches chunk of real estate at the center of the world (at least maps shown in America!)

It’s been a great last couple of months and I decided to create this handy dandy (shitty) map of my route so you don’t have to read it (I’m a visual learner too, don’t worry). 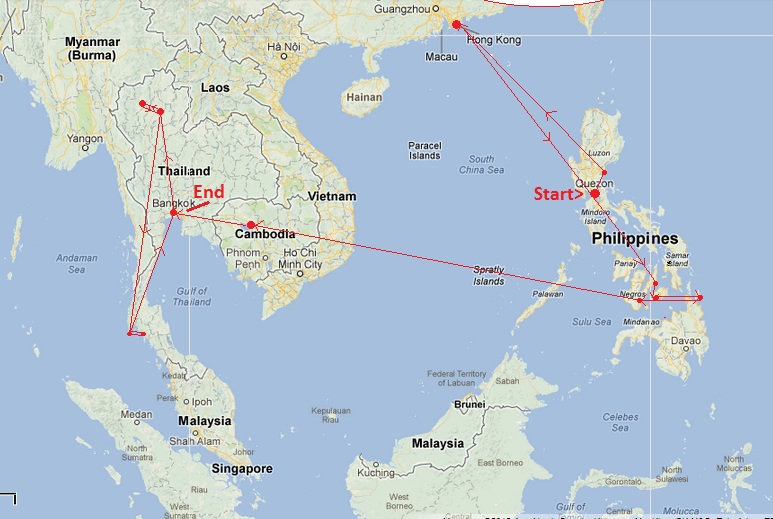 I really came  to Asia with no plan except that I wanted to start in the Philippines and end in Thailand, and the above is what I ended up with. It’s actually kind of cool for me to see the route I took as I was just going off of what other people were telling me was worthwhile , and all in all, I had a pretty stellar time in each place.

This was the longest trip I’ve ever taken without actually setting up shop somewhere (i.e. renting apartments in Argentina, Spain and Mexico) and I don’t feel burned out at all. Mostly because I was able to swing staying in hotels every night instead of hostels, ah the beauty of the emerging world! I’m really thinking about renting my condo out in Miami for a whole year and hitting the road on an epic trip, maybe, My Big Asian Adventure Part Deux? Or My Big Fat Worldwide Adventure? Who knows. All I know is this trip has just once again solidified my raw love for travel, that there are good humans out there and beautiful places still untouched (for the most part) by man’s mighty hand.

Here’s a quick break down of some of the highs and lows of my trip:

Siargao, Philippines. A small secluded island in the far east of The Philippines. I had a great 5 days surfing, hanging out with the locals and expats that call the island home. I also had a lot of fun partying, eating well,experiencing a cock fight and just chilling to the max.

Bangkok, Thailand. Many of you might think I’m crazy for saying Bangkok was my least favorite place, but while it started to grow on me, it’s just a semi-modern megapolis that is too hot, humid and crowded. While there is public transportation, it’s still a pain in the ass to get around. That being said, I had just come from an ultra-relaxed place (Siem Reap, Cambodia) and I just don’t think I was ready for it. I’ve come to realize that I don’t really like capital cities, but more so the 2nd or 3rd largest city in a country because you can more easily manage the layout, the locals, the prices and the vices.

Dishonorable Mention: Cebu City, Philippines. While I met some amazing people in Cebu that really made my time there decent, the city is a real shit hole and warrants no visit except to fly into the international airport and to get the fuck out of dodge to the islands.

Climbing the Millenium tree in Baler. A local took me to a massive balete tree (the largest in Asia) in the middle of nowhere, and we climbed up through the center which was hollow and made up of just a network of roots. It was a real rush and I knew if I slipped, there was no Medevac waiting to air lift my ass to the local trauma center.

Eating shit on my motorcycle in Pai, Thailand. Pai is a beautiful mountain-locked town in the north west of Thailand popular with backpackers, hippies and Thai Rastas. It’s also a popular place to rent a motorcycle and explore the countryside. It’s even more famous for dumb westerners leaving with “Pai Tattoos”, i.e. road rash from spilling on the bikes due to the dusty and gravel-ridden streets. I unfortunately joined that club and the fall put me out of commission from doing anything active for a couple weeks.

In conclusion. I’m more than happy that I finally made it to Asia. And although I had two months, I just got  a taste of the southeast Asia and need much more time to explore.

This is the sunset from one of my last nights of the trip in Ao Nang Beach, Thailand, pretty bittersweet. 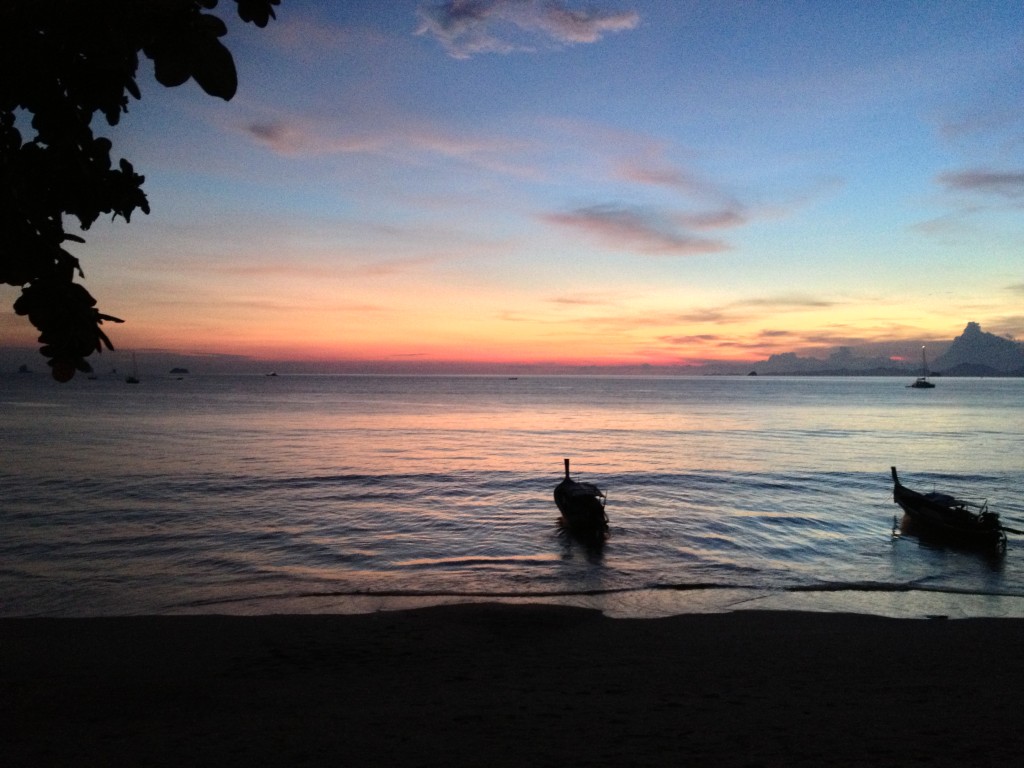 Travel trips for first time backpackers in South East Asia
How To Prepare For A Holiday To Phuket
Best Places to Surf in The Philippines - Siargao!