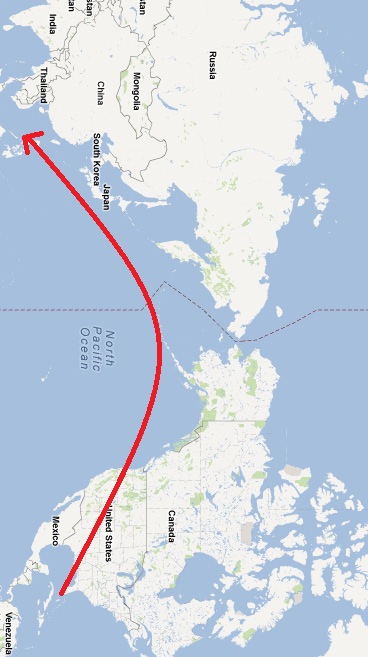 If you were a  consistent reader of The World or Bust (yea you should be), you’d see that most of my travels over the past two years, while frequent, last for just about two or three weeks at a time. This let’s me focus on seeing exactly what I want/need to see, having a good time, relaxing a bit, and then getting back to Miami where I need to work, sort of.

I’ve been wanting to do a serious trip for a long time now, but after graduating college a couple years ago, moving back to Miami, renting an apartment, and you know, trying to support myself, it wasn’t financially or professionally feasible. I also put a bump in the road when my dad and I bought an apartment together last December in South Beach and I got stuck reading dishwasher reviews instead of hostel reviews as I tried to do a lot of the work on the place myself to save some money having to pay a handy man.

Fast forward to a month ago, and my internet marketing business was finally doing decent enough for me to live comfortably, and the most important part was that I could do 95% of what I needed to from a computer with internet, setting myself up for a great escape.

A couple weeks ago, I had a French Couch Surfer stay for a night who actually was going to be in Miami until mid-December for an internship and was looking for a place. I thought, “hmmm this is it”, so I said, “Would you like to rent my place?” She “yes!” and was excited because it was way nicer and cheaper than she was seeing compared to other places online, and I was ecstatic because I finally got the puzzle pieces to fit for once so I could get the hell out of dodge for a bit!

Now the tough part, where to go? I’ve lived in Europe before, traveled all over Latin America multiple times, so one place kept coming to mind, Asia. Until now, I really had no desire in ever going to Asia. I just had this image of robotic, unemotional people, languages I could not read, write or understand and crazy foods that didn’t sound too appetizing like dog penis, etc.

Well after seeing how much travel bloggers herald Asia as an amazing place to see, do and experience, I decided I’d give it a shot. I really don’t have much interest in China or Japan, but South East Asia sounds pretty damn cool and on a whim, I bought a ticket from Miami to Manila. Why The Philippines? Why not. It seems like an interesting mix of east and west, it’s cheap and from what I’ve read, it’s not on the big tourist circuit just yet so maybe I’ll get to blog about some stuff nobody has blown up yet!

I leave September 1st, spend a couple of days in San Francisco, then head to Manila. From there I’ve got no plan except that I have to come back to The States in early November sometime. I’m thinking Thailand in October but if anyone has any Asian must-see things that they’d like to share with me, please do.

Kuala Lumpur - A Breath of Fresh Air in Southeast Asia
City of the Week: Taipei!
5 Must-Try Activities in Asia for Thrill Seekers