With the Olympics in London winding down, I thought writing a bit about our British brethren would be in order. Every wonder why the English “love” tea so much? Well here’s why!

When one thinks of the British, tea usually comes to mind (bad teeth and Big Ben aren’t far behind, just kidding! Sort of.). Tea culture has a long history in Great Britain. So, what’s the story behind the tea “obsession”?

Tea was first introduced to Britain in 1610 by the Dutch. In 1658, a London newspaper advertised tea and within less than a century, tea’s popularity exploded and it became the main British drink. Since then, the British have been consuming more tea per capita than any other group in the world.

High tea meals are popular outside of Britain too. Typically these meals include tea with scones and cream and a variety of finger foods like crust-less sandwiches containing ingredients like watercress, cucumber, tomato and cheese. There are specific rules of etiquette at these tea parties, as well as an established norm for how tea should be served. Traditionally, tea is made with freshly boiled water in a warm China teapot. One teaspoon per person of tea is in the pot before the hot water is poured in. The most common type of tea served is the English Breakfast variety, which is great with a little bit of milk.

Recently, the Athenaeum Hotel in London was lauded with The Tea Guilds “Top London Afternoon Tea 2012” award. The hotel was noted for its high quality, lavish details and superb service for tea time. The Tea Guild Awards have been dubbed the Oscars of the world of tea. A few other honored hotels include Four Seasons Hotel Park Lane, The InterContinental Park Lane, The Capital Hotel and The Churchill at Hyatt Regency London. If  you manage to find cheap flights to England, definitely pop into one of these famed hotels and splurge a little bit on a classic tea time experience!

Tea gifts are a perfect souvenir option for yourself and your family and friends back home. Even hardcore coffee drinkers could appreciate the delicate tea culture of the dainty British.

Happy sipping and remember, pinkies up! 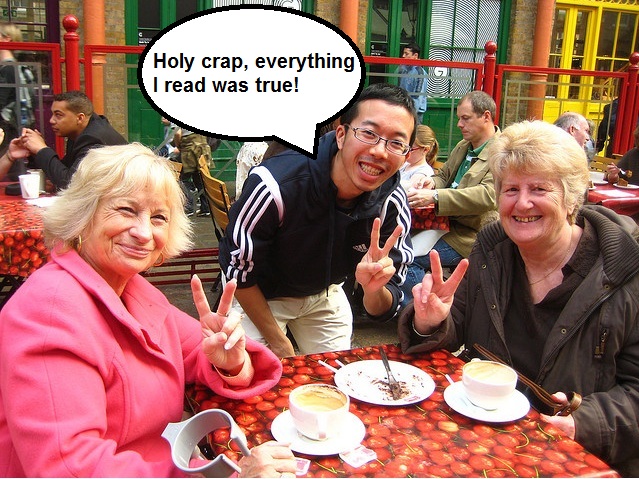 Dropping pounds is for dieting, not vacation! - 5 things to do on the cheap in Londontown
Fun Facts about Cruising in a Motor Home!
Who Needs London When The Sun Is Shining!