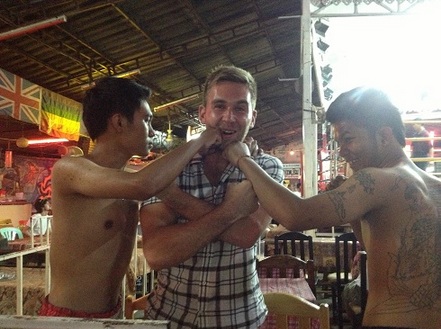 Thailand is just one of those countries you could easily get stuck in, be it the painfully beautiful beaches and countryside, to the bustling always-on metropolis of Bangkok, you will see many Farangs (foreigner in Thai) who come on vacation and never leave. Be it the draw of beautiful South East Asian arm candy (a dirty old man’s dream) or the chance at becoming the next greatest Muay Thai Boxing champion, I met more than a handful of expats that came to Thailand to be someone they weren’t somewhere else.

Upon arrival into Bangkok, I saw a ton of advertisements promoting the weekly Muay Thai boxing matches at Rajadamnern Stadium, one of the oldest and largest boxing venues in the city and country. After watching a cockfight in the Philippines, I figured the only logical progression for me would be to attend a real live Muay Thai boxing match and see humans duke it out rather than poultry.

While I didn’t make it to the fight in Bangkok because of a plane ticket I purchased earlier that left midweek before the weekend match, I did manage to make it to one in Chiang Mai.

I was at a bar in Chiang Mai talking to some other Farangs when one of them said he was actually living there and training as a Muay Thai boxer and that we should check out his fight the following night. He told us that he grew up in England and had a been a boxer his whole life but decided to move to Thailand a year earlier to try his hand at another fighting technique, ballsy.

Conditioning plays a huge role in Muay Thai boxing workout programs like other contact sports and the British guy said he had a pretty serious regiment that included multiple hours every single day. He even said they punch and kick hard shit like wood and metal to build up the bone in their shins and hands…I made sure to buy him a drink.

I had been watching some Muay Thai boxing on TV at my Bangkok hotel and I have to say it was pretty ruthless. If you’re not familiar with it like I really wasn’t, here’s a little background.

Muay Thai Boxing originated in Thailand and grew out of a few other South East Asian fighting techniques. It was used by Thai soldiers back in the day when they lost their weapons and had to go hand-to-hand. “Muay” derives from the Sanskrit word, Mayva, which translates “to bind together”. Unlike traditional boxing, Muay Thai allows for 8 points of contact –  feet, knees, elbows and punches. Fights are usually pretty quick and rounds last three minutes with no more than five rounds per fight. That means fighters are pretty fresh the entire fight and throwing hay makers and death knees the whole time.

So on the night of the big fight, my friend and I walked over from our hotel after having a few beers and paid our entrance at the Chiang Mai Muay Thai stadium. Upon entering, we could easily tell that the match we were coming to see wasn’t as authentic as it probably could have been given the audience was 90% tourists, that and the fee at the door included a drink…

Anyways, the first couple bouts we saw were a bit slow and really looked pretty staged, but as the night progressed the fights got more serious and dudes really were roughing each other up. Our British friend ended up being the main card, and after both he and the other fighter bowed to the crowd at each corner of the ring, they got right to it. 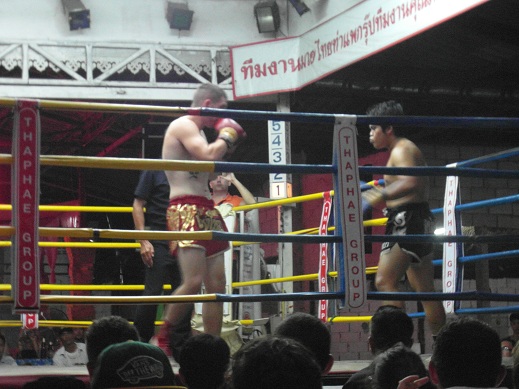 At first the Brit seemed a bit reserved, but after the first round, he took it up a notch as he began feeding off the slew of Farangs cheering in his favor. He got pretty hype and began railing on the Thai fighter to the point where he stunned him with a left hook, laid a clean kick directly to his neck, and BOOM! – The Thai went down and didn’t come back up, the crowd went nuts!

If you’ve never been to a Muay Thai boxing match in Chiang Mai or elsewhere,  it’s definitely a fun experience, but I suggest you go in Bangkok where the real deal fights go down. You can even enroll yourself in one of the many Muay Thai schools around the country and do some training yourself, something I’m considering doing on my return to SE Asia…Maybe.