It was the summer of 1951, and the people of Malaga were about to discover a historic treasure that had been long hidden beneath their feet. Employed to dig foundations for a new cultural centre, a team of construction workers suddenly struck a row of stones laid out in a curious shape.

The building works were paralysed and a painstaking process followed. Several surrounding buildings had to be demolished to uncover the site, and many archaeologists and architects were involved in the delicate restorative work, until a 2000-year old Roman Theater in Malaga was finally revealed in its full glory. Upon the completion of the restoration in 2003, the site was opened for visits to the public. 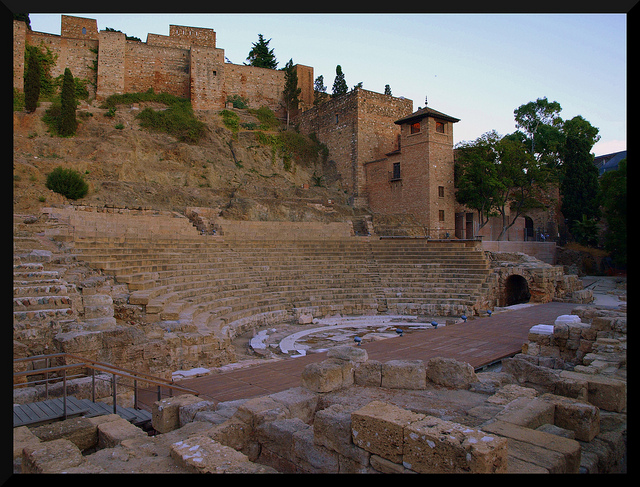 Want to visit a sunny destination, yet escape the tourist hoards and discover an abundance of culture and history? Then Malaga is the ideal spot for you. After you hire a car at Malaga Airport, you’ll find this enchanting Mediterranean city only a 15-minute drive away.

Malaga is characterised by several remarkable historic sightseeing spots, but the three most important ones are the Roman Theatre, the Alcazaba Fortress and the Gibralfaro Castle. Aside their architectural and historic significance, these three sights will also give you a deep understanding of the people of Malaga through the Roman and Moorish eras, until the Christian conquest in 1487.

Visits to the Roman theatre

The Teatro Romano, or Malaga’s Roman theater, is found on Calle Alcazabilla. The amphitheater dates back to the 1st century BC, built by Emperor Augustus, and it was in active use until the 3rd Century AD. The ruins are now fully restored and there is a small yet impressive visitor’s centre with audio-visual displays, as well as a small exhibition open to the public too. Entrance is free.

Historians have discovered that after the Romans abandoned Malaga in the 4th century, the theater fell out of use. The Moorish settlers, who arrived around 750 AD, used the theater as a quarry. Amazingly, you can find many of the pieces stolen by the Moors just next door: some of the pillars and stones were built into the arches and walls of the imposing Moorish castle on the hill next to the Roman Theater.

The Alcazaba and Gibralfaro

After seeing the Roman theater  you will be in an ideal spot to visit Malaga’s Moorish landmark, the Gibralfaro castle and the Alcazaba fortress that surrounds it. The fortress visit begins on the same street where the Roman Theater entrance is. You’ll need to walk up a steep hill, so avoiding midday heat is advisable or alternatively you can use the disabled lift to the top. The walk is recommended, however, as you will be able to appreciate numerous beautiful Moorish gateways on the way up.

After you have reached the hilltop through the Alcazaba fortress, you will now find yourself in the Gibralfaro Castle. You’ll notice, apart from the stunning views of the Mediterranean, how the castle and the fortress adapt themselves perfectly to the contours of the hillside, making it a highly defensible structure. It also has a remarkable water storage system, the ‘aljibes’, and the remains of a mosque. The tall towers and the stunning main entrance are wonderful displays of 11th century Moorish architecture.