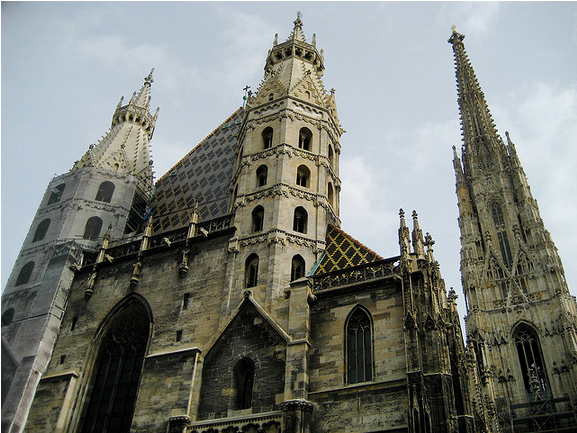 When I was in college, I decided to study abroad in Barcelona for 6 months. My classmates took the time we had for spring break to visit the heavy hitters like London and Paris, but, I figured I’d knock off those bucket list destinations when I had a little more money to do them right. That being said ,my friend and I took a little route looping from Western Europe overland into Eastern Europe and then back into Western Europe. Our itinerary looked like this, Munich-Salzburg (Austria)  -Budapest (Hungary) – Vienna (Austria).

While we saw lot’s of interesting things, one place that really stood out to me was St. Stephan’s Cathedral in Vienna. I had seen plenty of ancient Gothic cathedrals on that trip, and all were pretty impressive, but the sheer size of St Stephan’s really impressed me. Especially that such an ornate building could have been made so long ago before the advent of modern day tools, hell even electricity!

As is the case with most European cathedrals, construction dates are often confusing and most churches were added onto for hundreds of years. The main bulk of St Stephan’s was built between the 12th and 14th centuries, and showcases both Romanesque and Gothic architectural styles. The main spire rises to an impressive 448 ft and still dominates the skyline of the Vienna city center.

You can climb the tower (not for those out of shape!) for amazing views of the city as well as head below to the eerie crypt (worth the small fee).

Vienna has plenty of stuff to see and do for a few days, and as it’s a nice city, it’s not the cheapest. If you were thinking about staying in a hotel, I’d say reconsider as it’s worth it to go online to find apartments in Vienna in which you’ll get much more space, a kitchen to cook (save a few extra bucks) and get to live like the locals do!

An Urban Oasis in The Heart of SE Asia - Singapore!
Po...Port....Porto...Portugal!
Sydney Spotlight!