Being home to some of New York City’s most beloved sports teams, and playing host to the very best stars in the world when they called on the Big Apple, Madison Square Garden has had a long and illustrious history.

However, did you know that MSG has been the name of four separate arenas over the course of its 135 year history? This fact, and the momentous events that they have all held over the years have contributed to a significant portion of NYC’s history, as you will see in the paragraphs below. Here’s the history of Madison Square Garden you probably never knew! 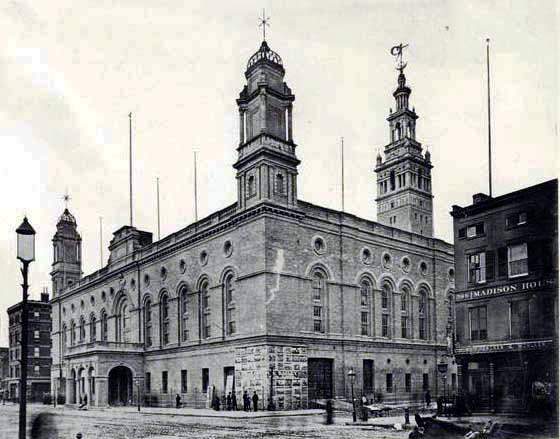 Operated by promoter extraordinaire P.T. Barnum as a venue for his circuses and other events (such as the Westminister Dog Show) when rail tycoon Cornelius Vanderbilt moved the main station for his railroad to Grand Central Terminal, the land was reclaimed by the Vanderbilt family after several years of being operated by Mr. Barnum, being reopened as Madison Square Garden in 1879.

Being sold to industrialist Andrew Carnegie and banking titan J.P. Morgan in 1889, Madison Square Garden would take on a dramatic new look within a year of them acquiring it.  While the old arena had been open to the elements, making it uncomfortably hot in summer and freezing cold in winter, the new Garden was fully enclosed, and was beautifully designed in the Beaux Arts style by architect Stanford White.

A tower that was inspired by the bell tower of Seville soared to a commanding 32 stories – making MSG the second tallest structure in NYC at the time of its completion. This structure hosted the World Series of Football in 1902 and 1903, back when the American game was still in its infancy, hosting matches played indoors, and Matthew Maloney set a world record for the fastest indoor marathon time in 1909, posting a mark of 2:45:54.4.

While the second iteration of Madison Square Garden was a thing of architectural beauty, the cultural heritage of a city took a back seat to the desires of the New York Life Insurance Company (they held the mortgage on the arena) to build a new headquarters for its operations, leading to the demolition of MSG II in 1925.

After this unfortunate episode, Madison Square Garden opened the third building in its history on Eighth Avenue between 49th and 50th Street in 1925.  While the exterior was box-like, the sight lines horrible and air quality mediocre due to poor ventilation and public smoking (which was a social norm in those days), many of New York’s most memorable cultural and sporting moments occurred here during the 43 years that it was open.

The best of these saw the biggest crowd in Garden history watched Fritzie Zivic defend his welterweight boxing title against Henry Armstrong in 1941, the New York Rangers racked up three Stanley Cups, and Marlilyn Monroe wished President Kennedy a happy birthday in the most sultry rendition of the song the world had seen at a party held at the Garden in May 1962, giving this building more than its share of major moments.

Built to replace the aging and inadequate structure that MSG III had become, the fourth and present iteration of Madison Square Garden was opened on February 11, 1968 after being built atop the underground segment of Pennsylvania station after the above ground portion of the terminal was deemed obsolete.

Continuing to be home to some of New York’s most memorable athletic and cultural events, the Rangers won the cup here in 1994 after a half a century of futility, Elton John chose MSG to host his 60th birthday concert, and Elvis Presley became the first recording artists to ever sell out four consecutive shows at this arena in 1972.

Greek Islands Not to Miss This Summer
Top Ten Things to do in Ibiza
Flashpacking in NYC!