Well, I really didn’t go that nuts, I just wanted to be cool and use HAM (stands for Hard as a Motha Fuc*** ) as YOLO is already played out.

Anyways, my second stop on my Germany marathon was in fact way up in the north of the country in the port city of Hamburg, about 4.5 hours north of Frankfurt via rail.

Why did I choose Hamburg as my 2nd stop? Because that’s where a couple German friends recommended I go, and it was a good rec. Hamburg is the 2nd largest city in Germany and is often described as a mini Berlin with a permeating bohemian vibe and large counter culture dominated by sex, drugs and rock ‘n’ roll. So, why not check it out? 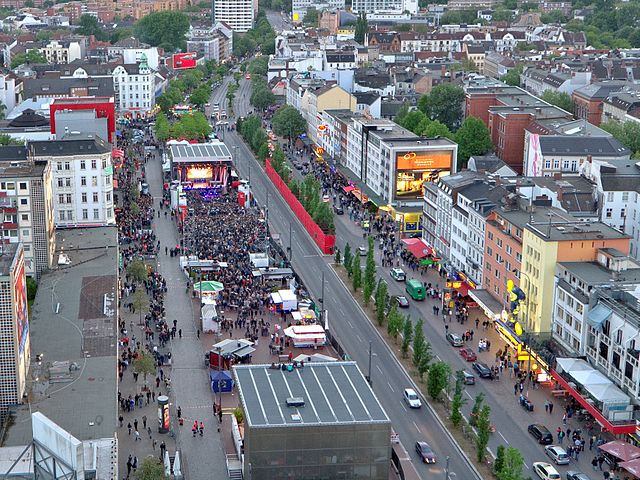 Upon arriving at the Hauptbahnhof (what the main station is called in every Germany city), I hopped on the easy-to-navigate metro to my hotel, the Acrotel, on the end of the Reeperbahn, Hamburg’s world famous vice thoroughfare. My room was nice, but like many hotels in Europe now, gives “free” Wi-Fi but it’s at a stupidly slow speed. If you want internet that you actually use, you have to pay another 8 euro per night, I did.

Hamburg was a major Hanseatic city (a large commercial and defensive guild of companies and cities in Northern Europe), so there was a huge influx of sailors and merchants coming from far off lands frequently. So what do horny, forced-abstinent  men who have been at sea for extended periods of time want to do first? Get raucous of course, and that’s why the Reeperbahn exists. Nowadays, it’s a mixture of theaters, great restaurants, countless bars, strip clubs and of course, prostitutes which have their own street closed to traffic…and other women! While all of this might sound sleazy to you, it’s really a popular nightlife destination for both tourists and locals alike and it’s pretty safe with a pretty sizeable police presence. It’s also pretty central and has lots of connections for public transportation, so it’s a good home base if you’re not put off by the sex shops and Eastern European women pinching your butt (don’t mind it).

My first full day, I took a walking tour like I did in Frankfurt. It was put on by rather spirited South African guy who spoke perfect German. We started in the city center outside of the city hall which is quite impressive. I couldn’t even get it all into one picture! 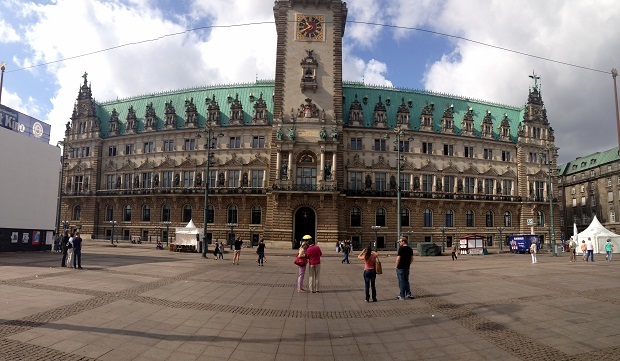 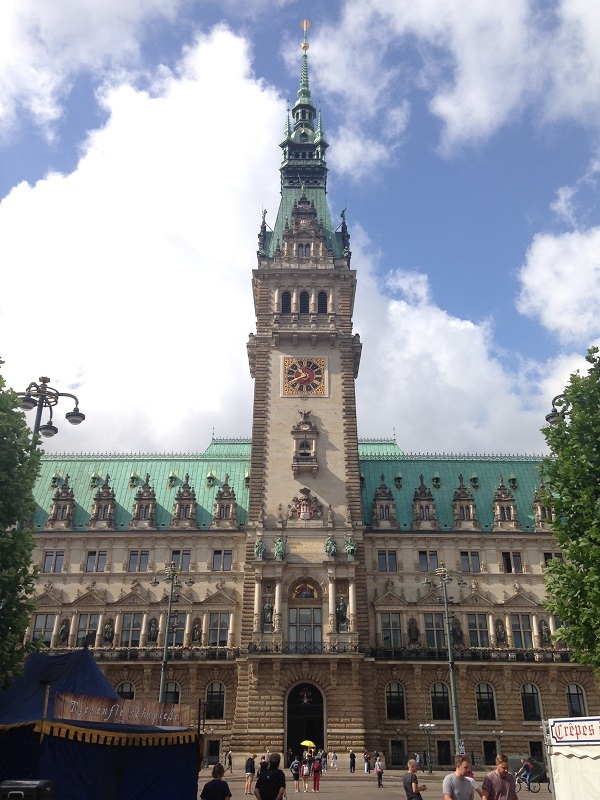 The city hall is one of the most ornate buildings you’ll see in the city as Hamburg wasn’t about aesthetics, it was about making moohlah and the majority of buildings were made for utilitarian purposes like crashing after a hard days work, storing goods like cotton, coffee, spices, etc.

Another reason you won’t see many old historic buildings in Hamburg is that in 1842 there was a major fire that burned down a large chunk of the city center. If the 1842 fire didn’t take care of the older buildings, the WWII bombings did. Hamburg was known as the, “Hiroshima of Germany”, when a series of massive Allied bombing campaigns created a firestorm which obliterated the majority of the city. Most buildings weren’t rebuilt and just replaced, but a few of the old churches were. I thought the one pictured below was an interesting reconstruction as they decided to put a modern spire on top of the replica of the original church. 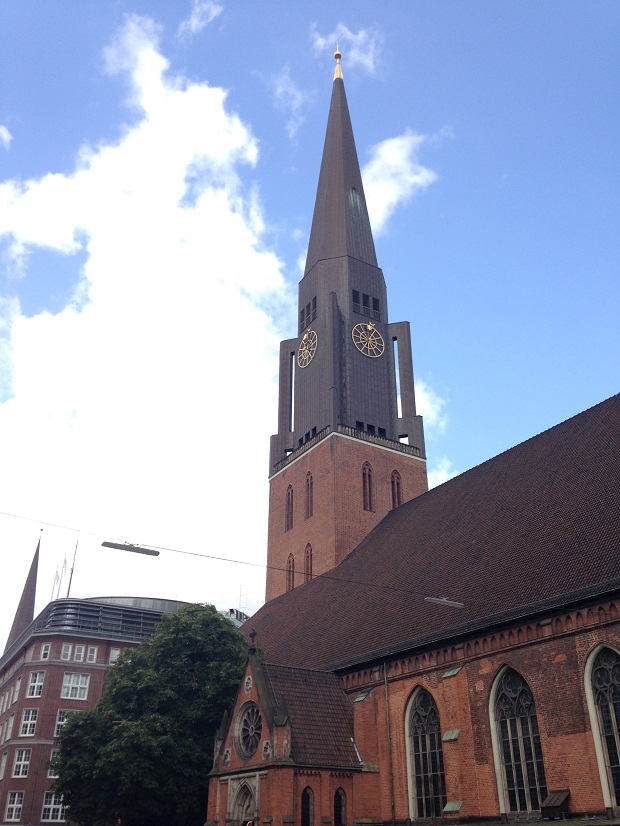 We worked our way from the city center towards the port which is full of brick Countinghouses. The countinghouses were originally used as offices for all the business happening in the port, but have since been converted to mixed-use residential buildings in an effort to attract more people to live in the city center. One famous countinghouse is the Chile Haus built in 1924 and it’s a pretty impressive example of brick expressionism which Hamburg is famous for. 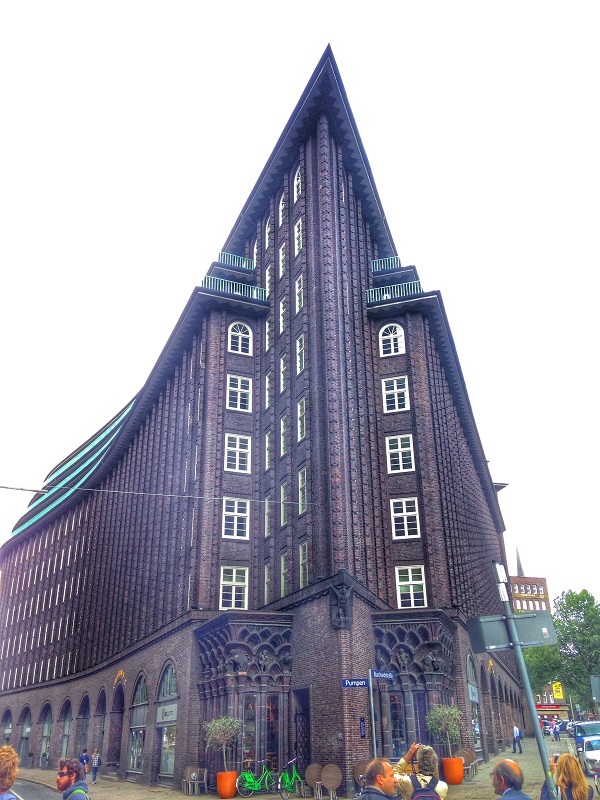 Our next stop was the Speicherstadt, or warehouse district which is the first round of port islands closest to the city. These impressive brick warehouses were built in the 1880s to store all of the goods coming off of the ships. Nowadays, they house all sorts of museums, private businesses and lofts. I thought these were super cool, see below. 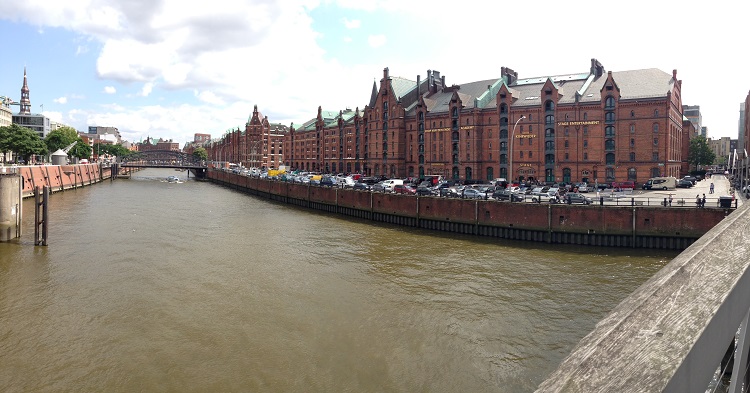 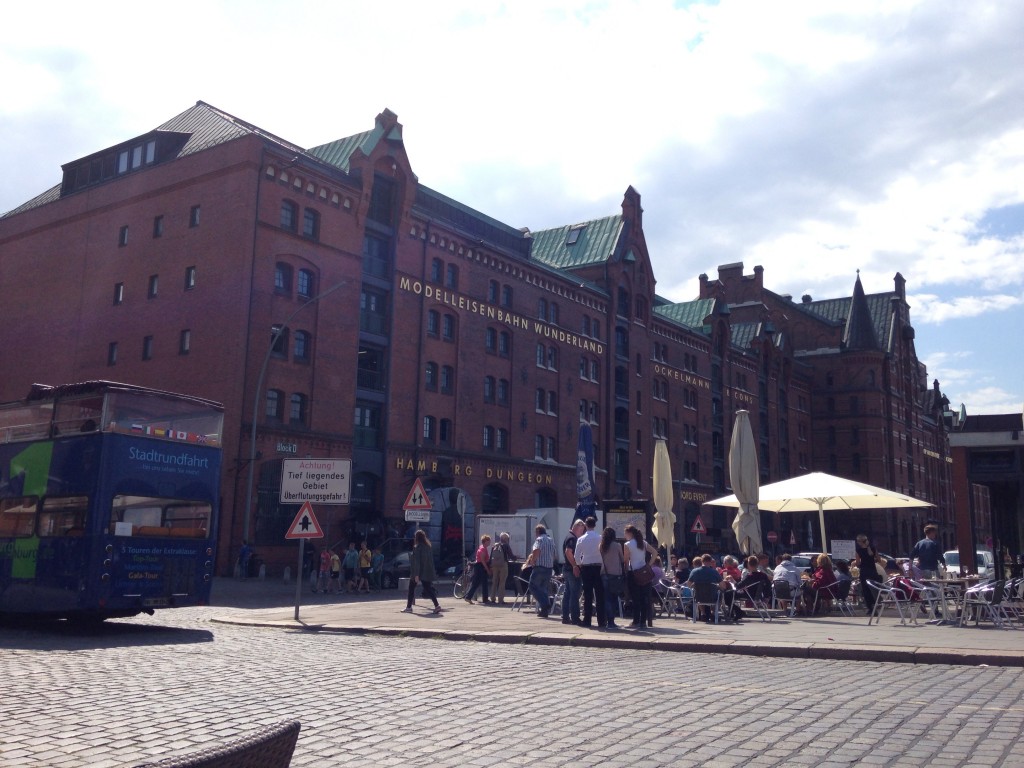 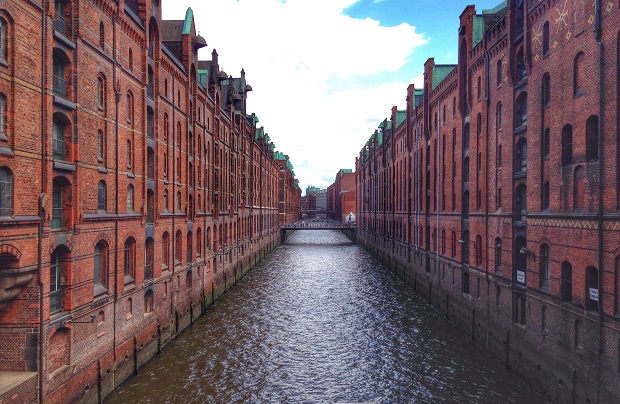 If you keep on walking through the Speicherstadt, you’ll reach the HafenCity which stands for, “Harbor City”. This is currently the largest inner-city urban development in Europe, and it’s huge! The city is trying to attract more people towards the city instead of the suburbs so they invested big time in buying up all the land in the center of the harbor to redevelop. It won’t be done for another 10 years, and the real estate prices are astronomical, but, it’s still pretty interesting to have a walk around to admire all of the modern architecture. 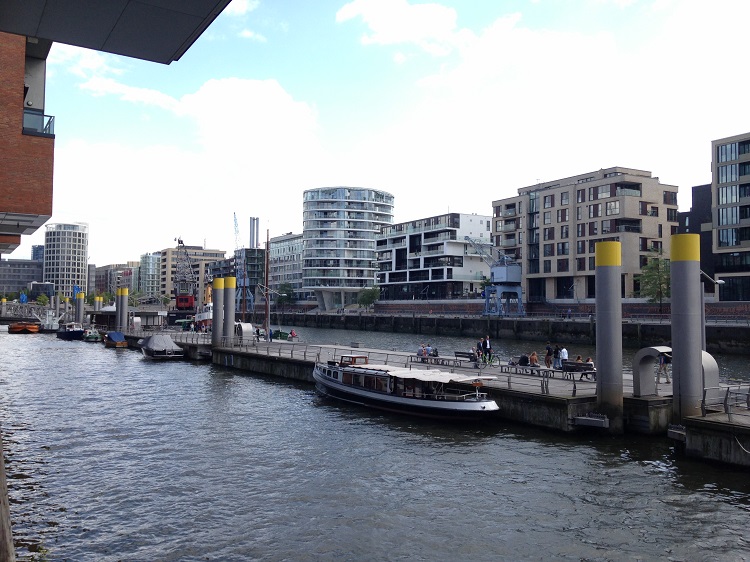 While the majority of places we saw on the tour were a bit drab and uninspiring (to be expected in an old port), I explored the northern part of the city center and it was much more lively with tons of shopping, cafes, beautiful buildings, a large lake and a relaxing botanical garden. 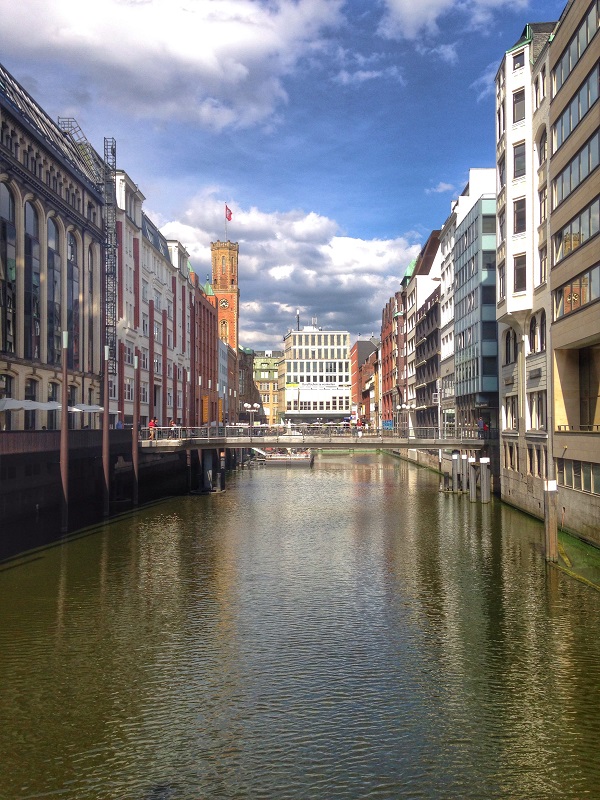 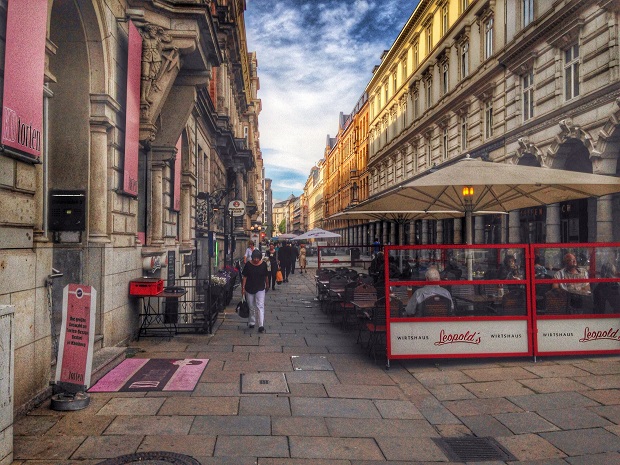 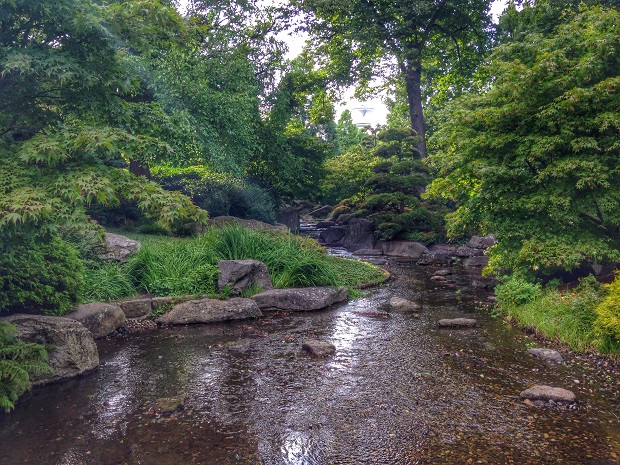 If you want to feel the real vibe of Hamburg though, don’t waste your time in the city center. While it’s worth a visit, the real allure of the city are the friendly people and the neighborhoods of Saint Pauli (where the Reeperbahn is), Altona/Ottensen and especially Sternshanze (known as Schanze for short) which are full of awesome and affordable restaurants, cool bars/cafes and beautiful tree-lined streets to wander around down. 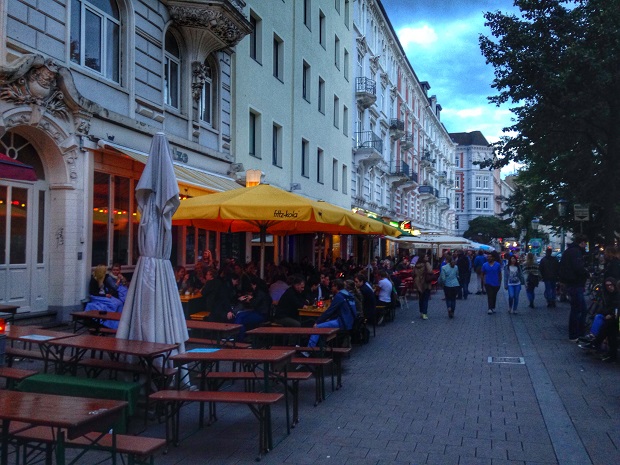 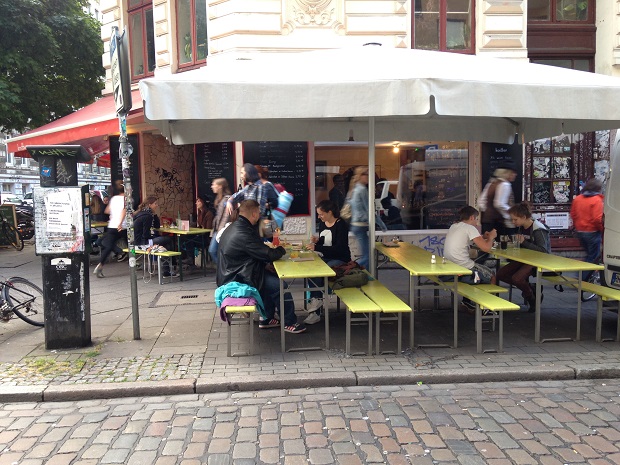 While I only had a few days in the beginning of the week in Hamburg, it’s definitely worth a few days, and I would suggest going on a weekend when I hear everything turns up and offers some of the best nightlife in all of Europe with its huge student population and well-to-do residents.

Top European Destinations to Hit the Slopes This Winter
Paris — the City of Light and Countless Things to Do
3 days in Chi-Town!