I just turned 26 years old, that means I was born in 1987 –  quite the year. Gas only cost 89 cents/gallon, Alf was straight killing it and Arnold Schwarzenegger starred in one of his finest movies, Predator. Beyond acid wash jeans and ring pops, there wasn’t much else going on… Fast forward a few years to 1992 and I was happily enjoying eating my boogers in my 3nd grade class when our teacher introduced a new student. “Hello everybody, please welcome Janja, she’s from Yugoslavia”. To be honest, she could have been from anywhere outside of the states and I wouldn’t have known where it was, but I do remember Janja not speaking English, at all. She struggled a lot when communicating, but within a couple of months, her spongy adolescent brain sucked up the language and she became part of the crew.

It’s funny that I still remember that Janja was from Yugoslavia even after 20 years (especially because I think she left my school after a couple years), but I had a recent week long trip to her former homeland, and I saw first hand why her family got the hell out while they could.

Yugoslavia, if you’re not aware, does not exist anymore. It was around for less than a 100 years in the 20th century in various forms (also known as the Kingdom of Slovenes, Croats and Serbs) and was a large country in southeastern Europe in what is now Slovenia, Croatia, Serbia, Bosnia and Herzegovina, Montenegro, Kosovo and Macedonia. 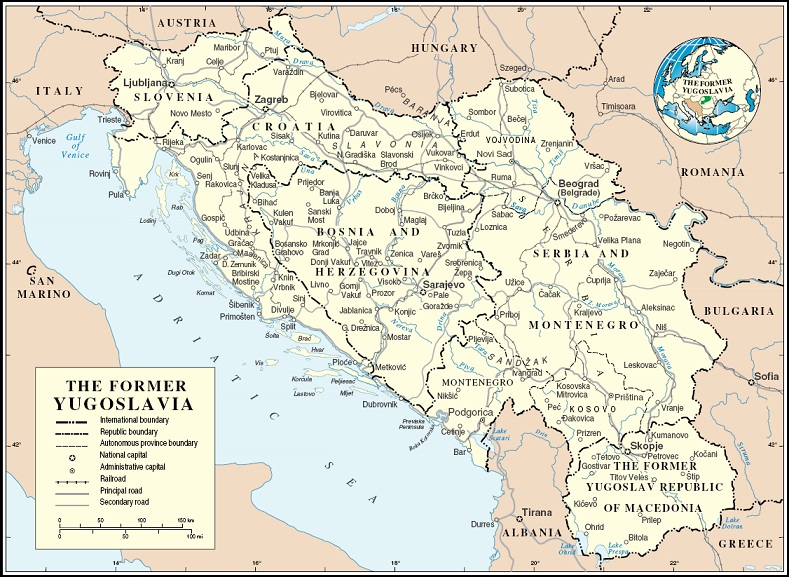 The history is extremely complex, and I’m no expert, but I’ll briefly explain what happened post WWII until the brutal Yugoslavian War that occurred and brought Janja to my small elementary school outside of Philadelphia.

From what I gathered after WWII, Yugoslavia was a socialist country until the 1990’s. But, as a member of the free world, I automatically figured that the people must have lived a meager, controlled life. This wasn’t the case from what the local Bosnians told me, in fact, many of them long for the days of a unified Yugoslavia when the unemployment rate was 0%, now almost 50%! Vacations were common, and Yugoslavians even prided themselves on their western fashion style and modernity. Everything that was consumed was 99% produced in Yugoslavia, for Yugoslavians, and things were made well. Most importantly, people of different faiths got along, we’re talking Catholics, Muslims (which Bosnia is 40%) and Orthodox.

A key factor to Yugoslavia’s success? One man. Josip Broz Tito. A dictator that even most people today revere in a positive light, hmmm, I thought dictators were all bad? Tito was a charismatic man who cared deeply for his Yugoslavia and its peoples. He made strong alliances with other world powers, but kept his distance which gave him a unique bargaining position between the US and Soviet Union (nobody wanted to start WWIII). After a long tenure, Tito grew old and eventually passed away in 1980 and things began to go downhill.

Without Tito, Yugoslavia couldn’t seem to hold itself together, and combined with rising debt/economic problems, poor leadership and rising ethnic tensions, things heated up rather quickly.

I mentioned that there were 3 main groups of people in Yugoslavia, and you would think that these different “peoples” with different religious backgrounds would probably originate from different places. This isn’t the case – the people of Yugoslavia are the same. The Muslims (known as Bosnaks) aren’t descended from Saudi Arabia, they are the same people as the Orthodox (known as Serbs) and the Catholics (known as Croats). When the late 1980’s rolled around, people started to look for differences to play up and fighting began to breakout, mostly involving what is now Serbia (majority Orthodox), Croatia (majority Catholic) and Bosnia and Herzegovina (one country)((majority Muslim). It’s hard to get a straight answer out of anyone from any of the aforementioned countries, but there are two definitions I gave deduced  for anyone associating with any of the terms, Croat, Bosnak, or Serb. A person born and living in Serbia can still consider themselves Croat just because they are Catholic, even if they have never set foot in Croatia. A Muslim born and living in Croatia can consider themselves a Bosnak just because they are Muslim and have never crossed into Bosnia. It’s extremely complicated but nowadays you have people both defining themselves by their religious background, as well as where they are actually from (i.e. Croat for Croatian, Bosnak for Bosnian and Serb for Serbian). Signs are written in three “languages” in Bosnia – Croatian, Bosnian and Serbian which are for all intensive purposes, the same language.

Damn that hurt my brain!

Anyways, I still remember my mom watching what was going on in the former Yugoslavia on TV when I was a young kid, and until I decided to head there a couple of weeks ago, I had really no idea what had happened. But let me tell you people, it was fucked up, and still is. While racial tensions have cooled down, Bosnia (and parts of Croatia) are still a mess, and buildings all over the two countries are still littered with bullet holes, grenade blasts and mortar attacks.

After spending a week in Croatia (which I didn’t completely enjoy because I thought it was too touristy), I decided to head inland a couple hours from Dubrovnik to the city of Mostar, Bosnia for something a bit more…authentic. When I got off the bus and walked to the city center, I was blown away (no pun intended). Not only did it look completely different than its contiguous neighbor, Croatia, it looked like something out of a movie. Old Ottoman style architecture from the 15-1600’s, minarets punctuating the cityscape, dudes wearing fez’s and almost every building scarred from stray bullets. It was surreal. 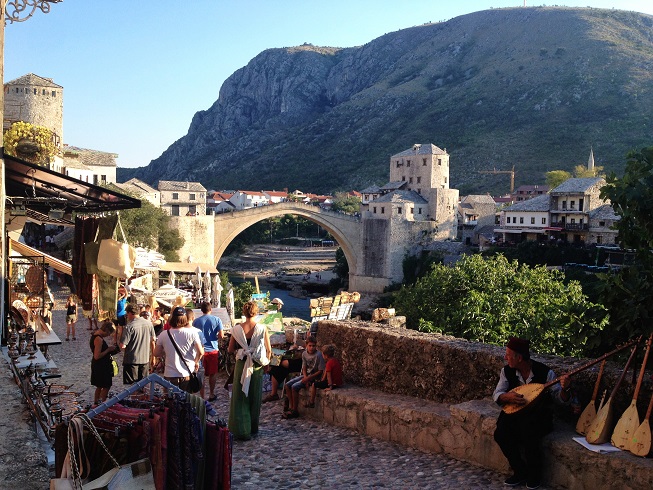 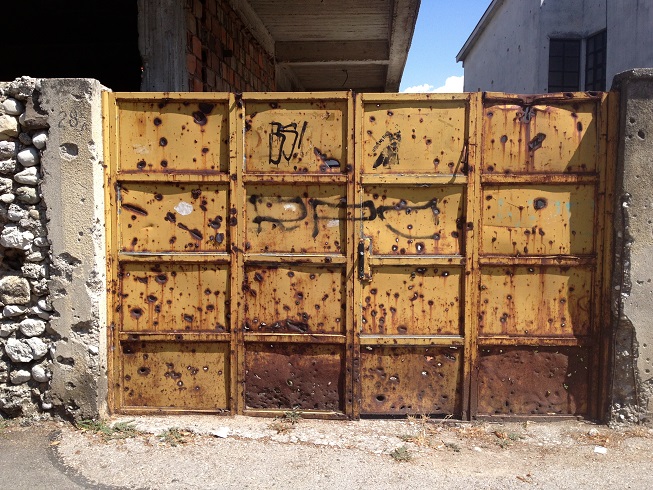 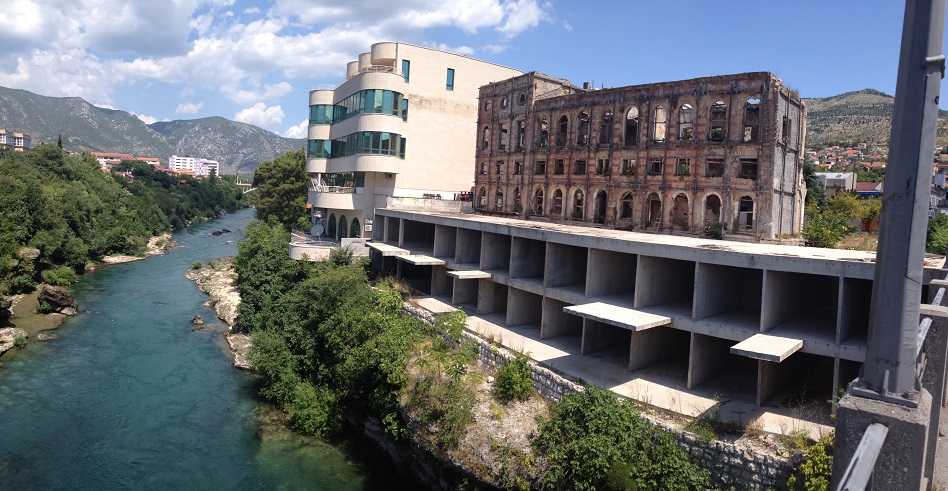 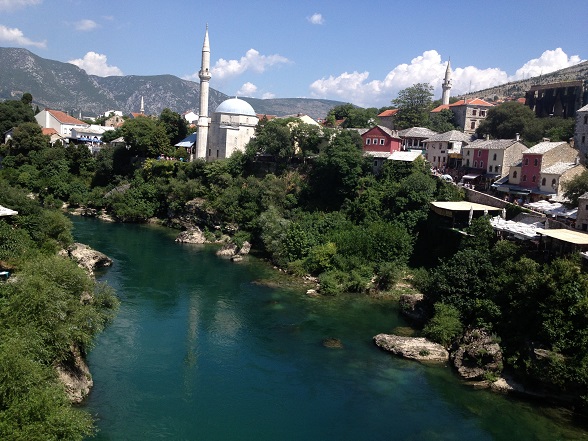 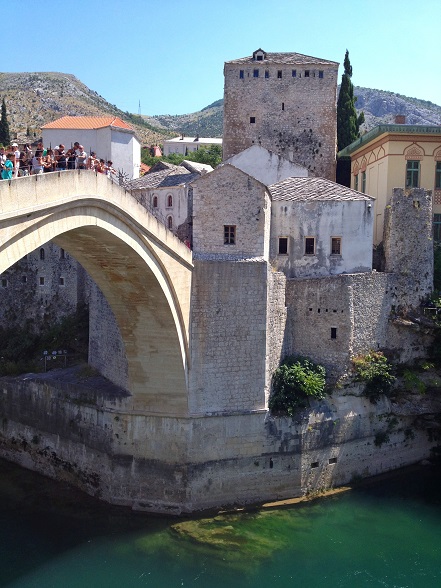 I was pretty fascinated by the Islamic influence, never seeing something like it in Europe. After hearing the call to prayer in the late afternoon spreading across the city from the multitude of minarets, I looked at my friend with wide eyes and said, “where…are…we?” Thinking I had drank my last beer in Croatia for the next few days, I was more than relieved to learn that the Islam (for the most part) practiced in Bosnia is pretty relaxed. I did happen to visit during Ramadan, a month long Muslim holiday where people can only eat before sunrise and after sunset. I though the old Ramy Dammy would put a serious hamper on my partying, but, thankfully it didn’t seem to stop the youth of the city from having a good time at night. Mostar (supposedly) is pretty chill compared to the rest of the country, and I can definitely attest to that after visiting the capital, Sarajevo, which felt much more, conservative.

I would highly recommend anyone to visit Bosnia. It is cheap, extremely interesting, beautiful and a great place to enjoy the great outdoors (the bus ride through the mountains from Mostar to Sarajevo was stunning). While tourism is starting to pick up, it’s a place that doesn’t feel overrun yet (ahemm, Croatia). Check it out!

Europe in January - Without The Winter Blues
An Urban Oasis in The Heart of SE Asia - Singapore!
Romans and Moors: Malaga’s Ancient Mysteries!