The temples of Angkor were one of the must-see sites for me as I traveled around Southeast Asia. There is something otherworldly about the way they stand, some proud and extravagant, others reduced to piles of rubble, but all evidence of the power and wealth of the Khmer Empire, which ruled for over 600 years. Fantastic unique holidays in Cambodia are available, which combine trips to Angkor with other parts of the region, and help you see as much of this fascinating country as possible.

My friend and I arrived in Cambodia after what can only be described as a tumultuous three hour border crossing from Thailand in an unlicensed taxi, with a driver barely keeping himself awake by downing cans of Red Bull. It would be an understatement to say we were relieved to finally reach Siem Reap. The city acts as a gateway to the Angkor temples, and the hotels do deals including accommodation and transport to and from the site. We were taken there and back each day by a very nice tuk-tuk driver, who was also extremely knowledgeable about the history of the area. Because the Angkor Archaeological Park complex is so vast (around 400km2 off the top of my head), it is obviously necessary to have transport to take you from one temple to the next. 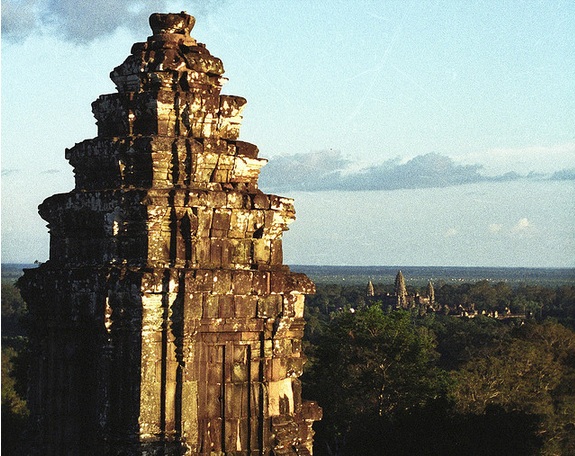 Angkor was once the seat of the Khmer Empire, which at various points ruled over what is now Laos, Thailand, Vietnam, Burma, and Malaysia. It’s believed that the area could have been inhabited by up to a million people in its heyday, which is not actually that difficult to imagine when you see the throngs of visitors it receives every day. The most famous and extravagant temple, Angkor Wat, was built in the twelfth century by King Suryavarman II, and is full of reliefs depicting him as well as the Hindu gods. Suryavarman is said to have killed a claimant to the throne by leaping on the head of his rival’s elephant, so I suppose he did have something to celebrate. The famous stone faces that have become iconic of Angkor can be found on the Bayon temple, and closely resemble that of King Jayavarman VII, who it was built for. Well, why not…

The Ta Prohm temple has been impressively accessorised by nature, with vast tree roots twisting around and enveloping parts of the stone. It was also used as a filming location in Tomb Raider, so you can also run around pretending to be Angelina Jolie (optional). 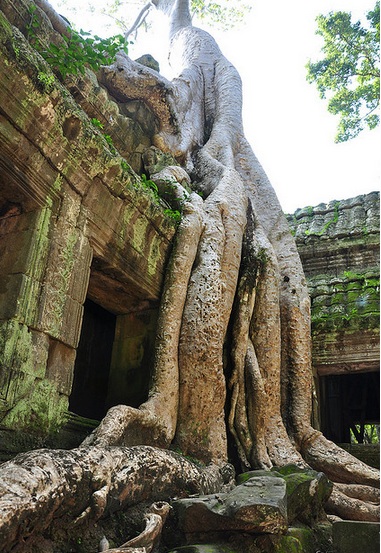 There are shaded restaurants on the site to buy food and drink, and the humidity can make all the temple-ing quite tiring so it’s good to take a break every so often. One thing I wasn’t anticipating was the amount of small children who follow you between temples attempting to sell you things. Their knowledge of the capital cities of the world put mine and my friend’s to shame, and they can count to 10 in almost every language.

Katherine likes to a get a feel for the history of the places she visits, and seeks out the bits which reveal something about the culture in different areas of the globe. She has travelled in four different continents and is looking forward to exploring the rest.