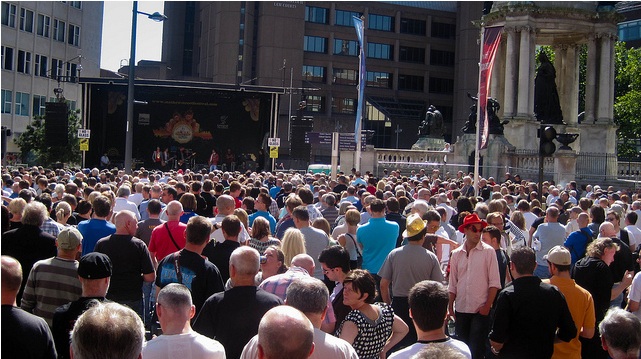 The annual celebration of Liverpool’s rich musical heritage and role as the World Capital of Pop, the Matthew Street Music Festival is a free two day event, showcasing more than 80 hours of live outdoor music.

Featuring cover, original and new bands, it attracts local people and guests from all over Europe, who can all find great deals on Liverpool hotels from Travelodge.

August bank holiday weekend will see a whole host of music events and live festivals taking place in and around Matthew Street, with two of the stages not only playing host to the usual high quality tribute bands, but also having a special section for acts influenced by the Beatles in honour of their 50th anniversary.

As part of International Beatle Week – one of the biggest music events in the world – there will be live gigs taking place all over the city, from the Cavern Club and the Cavern Pub on Matthew Street to the Adelphi Hotel, as well as memorabilia sales, guest speakers and sightseeing tours, with the Matthew Street Festival, which will feature bands from more than 20 countries and fans from more than 40, as the grand finale.

Now in its 20th year, the festival is a symbol of what music means to the city, providing six outdoor live stages over the two days with a line-up to please all ages and tastes. Not only that, but as a European Cultural Capital, there are plenty of other things to do in the city, from museums and galleries to great shopping and a World Heritage waterfront.

My Shameful Confession and Yorkshire Obsession
The Best UK Beach Breaks
An Insider’s Guide to London - The 20 best spots to eat, drink and be merry