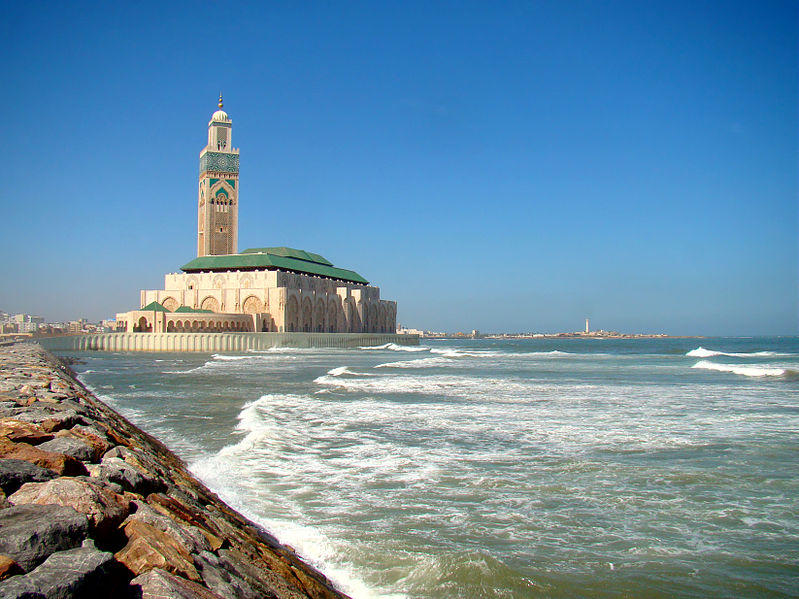 With Spain on my mind this week, I got lost on Google Maps and ended up in Morocco. While giving an ex girlfriend a lot of flak about going there with her friends a couple years back, it seems like if you are not dumb and wild, Morocco can make for a truly unforgettable adventure.

I was intrigued about reading more about Casablanca because of its Spanish name.  After a little Wikipedia action, I learned it had quite the storied history with many different groups running the show over the past few thousand years from Berbers to the British.  The Spanish were in charge from 1580 until 1640, and I guess after they kicked out the Moors (and Jews including my family, that’s why I have an Hispanic last name) from Spain in 1492, they decided to keep heading south.

The above picture is of the Hassan II Mosque in Casablanca.  The impressive structure was built in the 1980’s on reclaimed land from the ocean and inspired by a line from the Qur’an that states, “the throne of Allah was built on water.”  It is also currently the 7th largest Mosque in the world.  After seeing some pretty awesome pictures and reading cool stories from other travel bloggers about Morocco, I think checking out some flights to Casablanca might be on the agenda sooner than later.

Have you ever been to Morocco, what did you think?