Drinking plays an essential role in Germany’s culture and traditions. It is of course renowned as a nation of beer-drinkers – a stereotype that has been reinforced across the globe thanks to the festival giant that is Oktoberfest. But there is a whole lot more to Germany’s drinking scene than litres of lager and pints of Pilsner. Drinking in Germany is a way of life, check out 10 of the most popular beverages from the land of lederhosen. 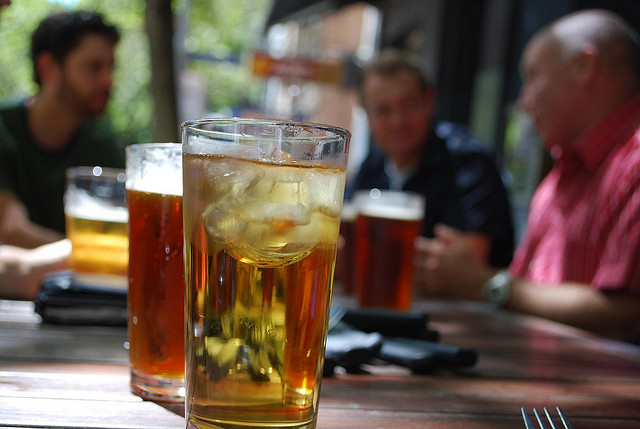 Pretty much anything can be made into a Schorle (something akin to a spritzer, but essentially any kind of liquid drink with an injection of sparkling water). Within the Saftschorle family – a fruit juice/sparkling water mix – Apfelschorle (the apple juice variety) steals the limelight, often listed alone on menus and drinks lists, while the others are bundled together in a general “Saftschorle” option. Refreshingly light yet sufficiently sweet, this tasty beverage can be found in pretty much all corners of Germany. Interchange with wine or beer for an alcoholic upgrade.

On the subject of Germans and their beloved mixes, Spezi is the trademarked cola and orange soda mix, the kind that every 10 year-old experimented with when left alone at the soft drink dispenser at service stations and fast-food restaurants. A murky brown solution that essentially tastes like Coke but tangy, it may not be for everyone, but it’s certainly an interesting experience.

Granted, Almdudler may be an Austrian export, but it’s made its way out of the Alpine and into the hearts of Germans everywhere. A sweetened carbonated drink made from grape and apple juice with herb flavourings and a similar taste to ginger ale, it may sound like a rather odd concoction of flavours but has a surprisingly natural taste.

An integral part of German Christmas and New Year celebrations, the Feuerzangenbowle is essentially a kind of stronger, fiery, more exciting version of mulled wine. The wine, spiced with cinnamon, ginger and orange peel, is prepared in a fondue-style bowl, upon which a rum-soaked sugarloaf is set alight, melting and caramelising into the wine below. The ceremony might just be the epitome of the notion of Gemütlichkeit.

Bionade is much more than just a soft drink. It’s Germany’s kind of organic, anti-globalisation Coke-alternative, all packed into a recyclable bottle stamped with a cool retro label. Even its flavours are pretty non-mainstream: elderberry, lychee, herbs and ginger-orange. Initially only available in trendy bars in Hamburg visited by trendy people with trendy jobs, its appeal has grown exponentially over the past few years and today it’s many Germans’ drink of choice – hipsters and non-hipsters alike.

While it’s common knowledge that the Germans aren’t big on tap water, they make up for it in variety. From still, through slightly sparkling, to heavily sparkling, water is available on a whole gradient of fizz.

Originating in the Rhein and Mosel river valleys, Riesling wines span a range of styles and variations, being produced in both sweet and dry variations. Riesling has got itself a firm foothold in the international white wine market thanks to its delightfully refreshing palate and versatility when it comes to pairing with foods (from pork to shellfish, from Asian to Moroccan, it accommodates all kinds of challenging flavours and spices).

This naturally-flavoured fig vodka can be added to the list of odd-sounding yet rather tasty German drinks. Custom dictates that before downing, the drinker tap the little purple lid of their unopened bottle on the table, forcing it to bubble – a novelty that has made it a popular party hit.

For the untrained drinker, Club Mate’s (say it: “mah-tay”) flavours can be a strange experience. Made from extracts of the Yerba-tea-plant native to South America – also known as “the green gold of the Indians – it’s something like ice-tea, but also not. In any case, this pervasive little bottle of goodness is an everyday staple for much of Berlin’s population and can be found in any decent Späti/supermarket/food place/basically anywhere around the city. It’s fitting for almost all situations – whether at work, in the library, at a club (mixed with vodka for a real caffeine/alcohol-fused pick-me-up) or hanging from excessive Vodka-Mates the night before. With its almost indescribable taste and its anonymous, cloaked vigilante-type mascot, Club Mate has an air of intrigue to it that only makes it all the more desirable.

Literally, “hunting-master”, Jägermeister has a notorious reputation for getting its drinker intoxicated at a fairly rapid pace. Most have a love-hate relationship with Jägermeister. For some, it’s comparable to cough medicine, while for others, it’s their go-to drink to shot/bomb/mix. Regardless, it’s one of Germany’s most widely exported brands.

This post was written by Susannah Taplin went to Warwick University and currently lives in Berlin. When she is not busy working at GoEuro, she is acclimating her palate to the diverse delights of Germany’s liquid diet.

3 days in Chi-Town!
Spending a Holiday in Malia, Crete (The Inbetweeners did it!)
The Best Full Moon Parties in The World