Now that spring has sprung and chased away the cold and the snow, everyone is itching to get outside and enjoy the beautiful weather. For those who prefer broadening their horizons to working on their tans, however, these museums should be at the top of your list if you’re planning to pay a visit to Toronto this summer. For me the trip was one of a lifetime, and easier than expected to organize. Travelling in from London I found great deals on non-stop flights to Toronto with Air Transat. Once in the city getting around was easy with the TTC public transit system. 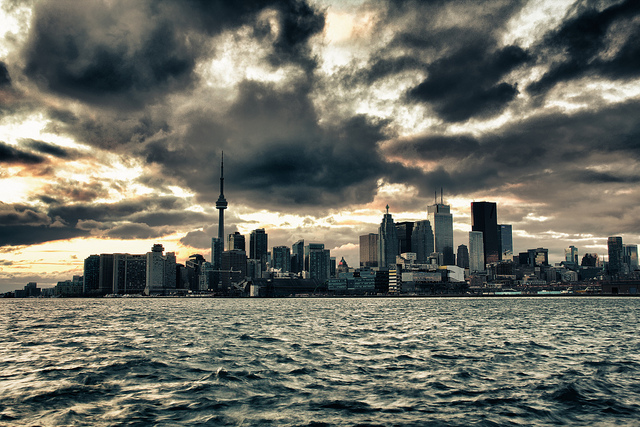 1. The Royal Ontario Museum (ROM) — This summer, the ROM has several amazing exhibitions on display, including their BIG exhibition: A display of 40 pieces from the museum’s extensive collection, selected especially for this show. The exhibition features textiles and costumes ranging from ancient Egyptian clothing to the wild and imaginative designs of artists today, including John Galliano for Dior and the late Alexander McQueen. Some of the pieces in the BIG exhibit have never been put on display before now! This museum is also home to the Patrick and Barbara Keenan Family gallery that boasts hands-on and interactive learning and allows visitors to explore the wonderful biodiversity of our planet. It hosts dozens of interactive displays, touchable specimens from around the world, and even some specimens that are still alive! Another excellent exhibit features the fossils of dinosaur eggs and embryos that were found in South Africa, which took five painstaking years of fieldwork and lab work to uncover. The ROM also has dozens of long-standing exhibitions, including galleries featuring architecture, art and sculpture from Rome, China, Greece, and even aboriginal art and artifacts from Canada’s First Peoples.

The Patrick and Barbara Keenan Family Gallery of Hands-On Biodiversity is a permanent exhibition and the Dinosaur Eggs & Babies exhibit is an ongoing project for the ROM, but the BIG exhibit will be open until the fall of 2013.

The ROM is at 100 Queen’s Park and just across the street from the museum, you can find a wide array of restaurants, including Morton’s Steakhouse, The Over Easy for some tasty breakfast fare, Annona for afternoon tea, or you can even stop by the conveniently named Museum Tavern for a hearty meal after a long day of wandering the ROM’s halls and seeing all the exhibits. There are also several InterContinental resorts within easy walking distance of the museum.

2. Art Gallery of Ontario (AGO) – Located barely a mile and a half from the ROM is the Art Gallery of Ontario. This summer, the gallery is hosting several exhibitions which you won’t want to miss, including Patti Smith: Camera Solo, an exhibition featuring photographs, personal objects and a short film, which give a rare and intimate look at the rock icon herself. This particular exhibition will only be open until July 14, so make sure to keep that date in mind so that you don’t miss it! Another exhibition that will be opening this summer is Marina Abramovic and Ulay: Rest Energy, featuring a remastered video of the “warrior of performance art,” herself, Marina Abramovic, with her erstwhile partner Ulay, exploring the trust and vulnerability endemic to every intimate relationship.

The AGO is located on 317 Dundas Street West, just on the outskirts of Chinatown, but the area is crammed full of restaurants that offer a wide array of options. Within walking distance, you can find Frank, which serves European-inspired cuisine, the Manpuku Japanese Eatery, Karine’s, which serves vegan and vegetarian breakfast all day, as well as just plain old pizza courtesy of Pizzaiolo. Luckily there are plenty of hotels, like the Sheraton Centre and the Delta Chelsea nearby, so you don’t have too far to go after dinner.

3. The Power Plant Contemporary Art Gallery – The Power Plant is currently closed for installations, but on June 21, the contemporary art gallery will be hosting a party on their south terrace to celebrate the reopening of the museum for its summer season. The party is free to all and so is admission to the museum for the entire year, courtesy of generous support from the Hal Jackman Foundation. This party will also mark the unveiling for two new exhibitions. Draw the Line, a solo exhibition of work by Brussels-based artist Jimmy Robert exploring the corporeal potential of a range of different media, including photography, drawing, film, sculpture and performance. The second exhibition, Postscript: Writing After Conceptual Art, will feature paintings, sculpture, installation video and works on paper exploring the artistic possibilities of language. The Power Plant will be re-opening officially on June 6, with Powerball: 15 Minutes, a new and exciting installation that poses an intriguing question: “What does it mean to be famous in the 21st century?”

The Power Plant is located right on the harbor front at 231 Queens Quay West. If you’re a bit peckish, there are a number of restaurants where you can stop in for a quick bite. Within walking distance, you can find everything from Subway, to sushi to-go at Edo, as well as Tim Horton’s and The Watermark Irish pub. There are several hotels within five minutes’ walk of the gallery as well, including the Harborfront Specialty Suites, Metro Luxury Suites and the Radisson Hotel Admiral Toronto.

There it is: three art museums in Toronto to make your trip a tad bit more cultural. For the 4th largest city in North America, and one of the most multicultural in the world, Toronto lives up to its world class status. Hope to see you there!

Great European Cities for The Weekend!
3 days in Chi-Town!
4 Places in The World You Probably Never Knew Existed!