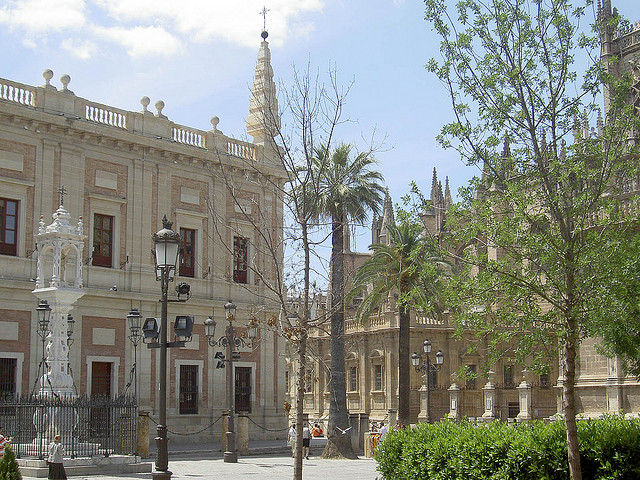 Seville is an historical city located in the southern region of Andalusia, in Spain. This city can be reached by air, bus and high speed AVE trains that connect Seville to Barcelona and Madrid. The city’s historical landmarks, ancient squares decorated with orange trees and variety of architecture make Seville an ideal city where to travel to during a city break.

After a short flight into the city’s airport, visitors can leave their luggage at the hotel and take a short walk to the city center, the Barrio de Santa Cruz. This area has plenty of bars and restaurants where visitors will be able to enjoy tapas. Most of the local restaurants offer a menú del día, a daily menu that includes two courses, bread, a desert and a drink for around 12€.

After a filling lunch visitors can walk around this area, where the city’s two main landmarks, the Alcazar fortress and the cathedral, are located. The area between these two monuments used to be the Jewish Quarter and is now filled with shops. There is a small park in the area and across the road there are several gardens decorated with fountains and statues. Visitors can explore the city on foot and in a horse-drawn-carriage. For dinner visitors can choose any bar in the district, most of which serve authentic Andalusian dishes, including salmorejo vegetable soup, taquitos de cazón cubes of fried dish and a variety of hams and wines.

Visitors will be able to explore the Cathedral and the Alcazar.  The cathedral was built on the ruins of a mosque and the mosque’s minaret was later transformed into the bell tower. This bell tower is La Giralda, a large tower that is the city’s most famous landmark. This grand cathedral has several naves with vaulted ceilings, chambers that have been transformed into galleries filled with religious antiques and a patio filled with orange trees. Its most famous attraction is the Retablo Mayor, a gilded altarpiece decorated with carved statues.

The nearby Alcazar has several halls. The ancient fortress was built by the Moors and was later transformed into a royal palace. Each hall in this palace has its own design and its own history, and most halls were built and rebuilt by several rulers. After exploring the halls visitors can walk around the baths, gardens and pools of the fortress.

In the afternoon visitors can walk around the María Luisa Park. This park is located a short walk away from the city center, on the banks of the Guadalquivir river. There are many paths lines with plants and fountains decorated with statues. Visitors will be able to explore this park on foot and during a ride in a horse-drawn carriage. The main attraction of this park is the Plaza de España, a large square that was built for an expo. The square is filled with historical buildings and there are many niches around the square. Each ceramic-tiled niche represents a Spanish province, and is decorated with murals.

Another main attraction in this city is the theme park Isla Mágica. This theme park has many roller coaster rides and water rides. Near the city there are several water parks filled with swimming pools.

The neighbourhood of Triana is located on the other side of the Guadalquivir river, opposite the historical city center. This area is known for its architecture and its gypsy culture. Most of the city’s famous bullfighters and flamenco dancers were brought up in this area. Visitors can explore the narrow streets that lead to a castle used during the Inquisition before heading for some tapas and a flamenco show.