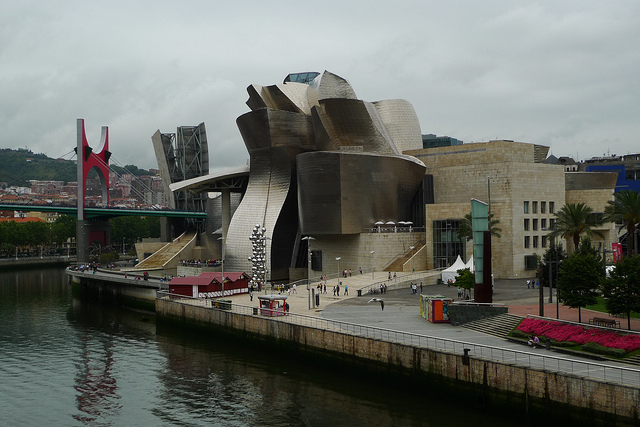 Located in the northern Basque Country, the city is known for its Guggenheim Museum, a large building designed by Frank Gehry and guarded by a large puppy made from flowers. Visitors who visit the city can take a walk around the city’s Old Town, filled with ancient cathedrals and churches, before heading out for some traditional pintxos in one of the city’s many bars.

The Guggenheim Museum, designed by Frank Gehry, is one of the city’s main landmarks. This large, metal structure is located on the banks of the river and is considered to be one of the city’s symbols. There are many art collections and sculptures, including several large metal coils that form tunnels in one of the exhibition halls. Next to the museum visitors will find Puppy, a sculpture of a large Puppy covered in flowers. There is a set of colourful metal tulips on the other side of the museum.

The city’s Old Quarter is the ancient part of Bilbao, a neighbourhood with narrow streets, balconies with views towards the river and many Gothic churches. The Santiago Cathedral, a Gothic cathedral, is located in this area.

Pintxos are part of the gastronomical culture of the Basque Country. These appetizers are often served on skewers and usually consist of a piece of bread topped by some local products. These can range from quail eggs and salt cod to traditional fried croquettes and stuffed mushrooms. Some of the most famous pintxo bars are located close to the city’s historical center.

The town of Getxo is located on the coast, close to the city. This area is connected to the city center by public transport. Getxo is known for its large ancient mansions, many of which used to belong to aristocrats. The reason why many locals visit the town is its beach, which has views towards the cliffs.

Another reason to visit this city are its many historical landmarks. The city has many ancient palaces. There are palaces that have been transformed into museums and palaces that are now part of official buildings. The main palaces are the Palacio de Chávarri and the Palacio de Olabarri, and there are several ancient gardens where visitors will be able to spend an afternoon in nearby.

During their stay, visitors can spend an afternoon walking around the city center, where the architecture changes from industrial buildings to ancient mansions from one street to the next. The Plaza Moyúa is an oblong plaza with a fountain and a park.

Visitors are likely to spend an afternoon around this plaza after their flight into the city, taking into account that the square is connected to the airport by the airport’s shuttle bus. There are several bus and subway stations on the square.

The main street, Gran Vía, is located steps away from the square and is filled with many shops and restaurants. The Palacio Chávarri is located on this street, next to some of the city’s most famous hotels. The Fine Arts Museum and the Doña Casilda Iturrizar Park are two landmarks located within walking distance of the square.