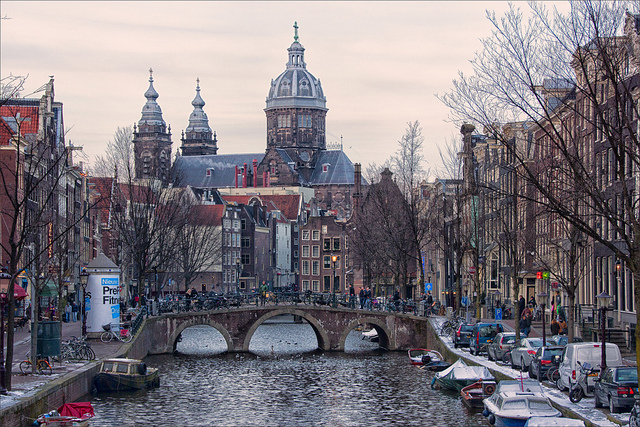 You think the top things to do in Amsterdam only involve eating “happy brownies” and indulging on hedonistic delights the city is known for?  While American movies may often depict the capital of Netherlands as the place to go to get stoned legally, there’s definitely more to Amsterdam.

Here are some of the top things to do in Amsterdam you won’t see in American movies:

Enjoy a cruise along the canals.  It’s no Venice, but the canals of Amsterdam (which was declared a UNESCO Monument in 2010) are picturesque as it is historically significant.  The canals were said to protect and aid in transportation in Amsterdam back in the 17th century.  Some of the canals may have been filled up to make way for new roads, but there are about 165 perfectly preserved canals where you can enjoy cruises and tour on.

Rent a bike and ride like the locals. Travel by bicycle is definitely the most common form of transportation in Amsterdam and the Netherlands in whole. There are plenty of shops that will rent you a bicycle for a day so you can explore the city. There are also plenty of companies that offer guided cycling holidays in the Netherlands to explore the country from a unique perspective.

Smell the flowers.  Tulips are Netherlands’ pride and joy and what best place to find them than in Keukenhof which is a 40 minute drive from Amsterdam.  Relive your fantasy of running amidst thousands of colourful tulips by taking a stroll along the famous bulb flower park in Lisse.

You can also visit the Amsterdam Tulip Museum where you can find exhibits of specimen of rare breeds of tulips.

The Bloemenmarkt is also a great place to see these famous Dutch flowers.  Also called the “Flower Market”, these complex of stalls float on the canal for a unique experience.

Stroll around De Wallen.  The De Wallen may be famous in Amsterdam as the city’s red light district.  But there’s more to this district than the sex tourism it promotes.  De Wallen has many historical townhouses and breathtaking infrastructures with great historical significance.  So it’s a great place to stroll during the day time as well.

Sample great Dutch cuisines.  One of the top things to do in Amsterdam is to enjoy authentic Dutch cuisines and delicacies.  Some of the favorites include the erwtensoep or split pea soup and the stamppot boerenkool which is perfect for Netherlands’ cooler climate.

Shop til you drop.  Amsterdam may not cross your mind as a shopping district.  But it is truly a great place to shop.  It has everything any traveller would wish for, from the budget-savvy backpacker to the high-flying jetsetter.  You can find retail outlets of exclusive labels or unique finds in independent boutiques of the Nine Street area.

In addition, there are many shops in Amsterdam where you can buy unique and quirky finds such as arts and antiques and interior decors.