If you’re like me and look up pointless crap like,  weird weather records in Europe and the five largest islands in the world, then you’ll enjoy this one! I’ve lived in Europe for a while and traveled pretty extensively throughout it, and I’m always finding myself looking for any given city’s main cathedral so I can compare it to every other one I’ve ever seen – for no reason.

It also gives me a sense of comfort as knowing I’ve found the “epicenter” of wherever I am, even though most locals never step foot inside them anymore (religion isn’t so popular anymore in Europe)((yea you can argue that point, but don’t)). Well, today I was wondering, “hmm, what is the tallest cathedral in the world”? Well, leave it to the Germans to one us up again with none other than, Ulm Minster (Ulm Münster in German). 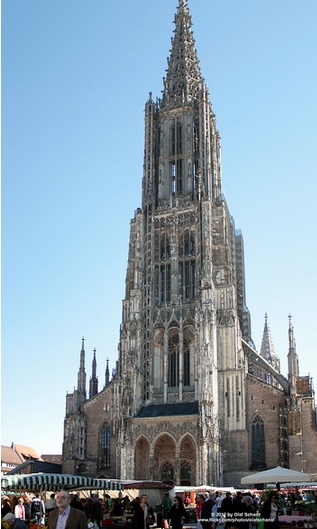 This Behemoth is actually the tallest church in the world, not just cathedral as it is now Protestant (sorry Pope Benedict XVI). It is located in the uber-nice city of Ulm, Germany (actually I don’t know how nice it is, I’ve never been there, just wanted to use uber) which is situated on the Danube River. For those who want to go to Ulm, you can visit Frankfurt or Munich as well which might have much cheaper flights in.

The church’s main spire rises to a dumb high 530 ft (161.5 m) and on a clear day, you can see the alps over 65 miles away! You would think the tallest church in the world would probably not be too old, but this bad boy was started way back in 1377 and the spire wasn’t complete until 1890! Talk about procrastination. It is the best example of Gothic architecture in Germany.

Another fun fact about Ulm Münster was that it was actually the tallest building in the world from 1890 until 1901, when it was surpassed by none other than my home city’s phallic masterpiece, Philadelphia City Hall.

Beyond checking out Ulm’s world-class cathedral, there are plenty of things to see and do for a weekend, making it a great option for a city break.

Where oh Where Could Atlantis Really Be?
Preparing for and walking the Camino de Santiago in Spain: a guide
What to be aware of when driving in continental Europe