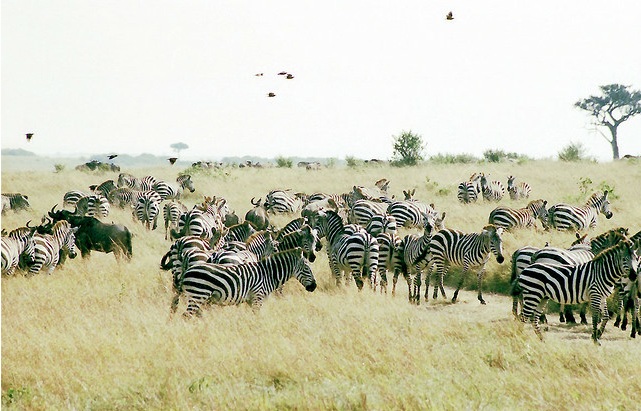 While Africa might not be on everyone’s bucket list, those who seek raw adventure will be pleased with what the massive continent has to offer. For some quick inspiration, check out five of the best places to go on an African safari which promise to be much more exciting than watching Jumanji or going to the zoo.

The ever-popular Masai Mara National Reserve is the most frequented destination for Kenyan and African safaris. Some of best the action happens between July and October, when the local wildebeest and zebra migrate, causing quite the spectacle for tourists.

Namibia’s Etosha National Park is a popular spot for photographers looking to get great shots of giraffes, endangered black rhinos, the world’s tallest elephants, lions and many other safari animals in their natural habit. Visitors to this safari drive themselves, but some guided tours are available at private lodges.

In the middle of the Kalahari Desert is the Okavango Delta, Botswana’s unique, wildlife filled safari. Because a lot of the river delta floods annually, visitors can see much of the fauna by traveling via canoe (mokoro). The best times to visit are during the area’s dry season from May to October.

The Ngorongoro Conservation Area in Tanzania has wildlife, history and spectacular geography to offer visitors. Within the grounds is the largest crater on earth which serves as a kind of modern Noah’s Ark. It is currently the home of the majority of the species one could find in East Africa.  The site has also revealed some of the earliest human remains ever discovered.

Zimbabwe’s Hwange National Park not only thrives with lions, elephants, wild dogs, giraffes and tons of other safari animals, but is also close to one of the seven wonders of the world, the majestic Victoria Falls. You can already feel the excitement in the air just from reading about these spots. Just watch out for roaming lions!

The Ultimate Travel Company provides exclusively tailored and one-of-a-kind travel packages for visitors seeking a unique African vacation. They travel all over the continent and offer some pretty cool opportunities to drive deep into the brush where you’re sure to see some amazing creatures in their native habitats.

Ever been on an African safari?  How was your experience?

Crackas in Paris!
Can I enter Kenya for business purposes?
Having a Mythical Time in Greece!