It seemed like a normal Sunday for me.  Up at 7, breakfast and straight to the city archives to scour the South American records post 1492 for any references to the ancient Mayan Mounds of Guatemala and the secret treasure they hold.  I had spent months checking old maps scribbled out by conquistadors, documented accounts from the natives about the terrain and stories of cities completely made of gold that glistened in the afternoon sunlight.

It was that Sunday that seemed no different than the rest that I finally found what I was looking for, a document from Pedro de Alvarado describing ancient Mayan-made mounds in the mangrove forests of Guatemala and hints to where they may be.  Two weeks later, I was smoking a cigarette and glancing out the yellowed window of a WWII-era prop plane en route to the coastal mangrove forests via Guatemala City to hire a local who would help guide me through the treacherous jungle in search of my prize…..bla hahaha, I wish it started like that!

Well, while staying at the Surf House on the coast of Guatemala in an extremely remote town along the ocean called Paredon, I got to talking with one of the locals, Yille, who worked at the house.  He said that if I didn’t feel like surfing (I had been pounded by the rough surf for hours the day before) he could take me on a canoe trip through the mangrove forest to a secret Mayan site that only a few locals even knew about.  My eyes opened wide and I immediately said, “si si vamos!”.  As he gathered his things, I thought to myself, wowww, a real world adventure…

The next thing I knew, he, myself and another girl at the surf house followed him down the dusty road into the woods, past some locals collecting fallen mangos from the trees above and down to the river’s edge .  He showed us to a dugout tree that served as a canoe and proceeded to stick us down the slow moving river (not paddle). 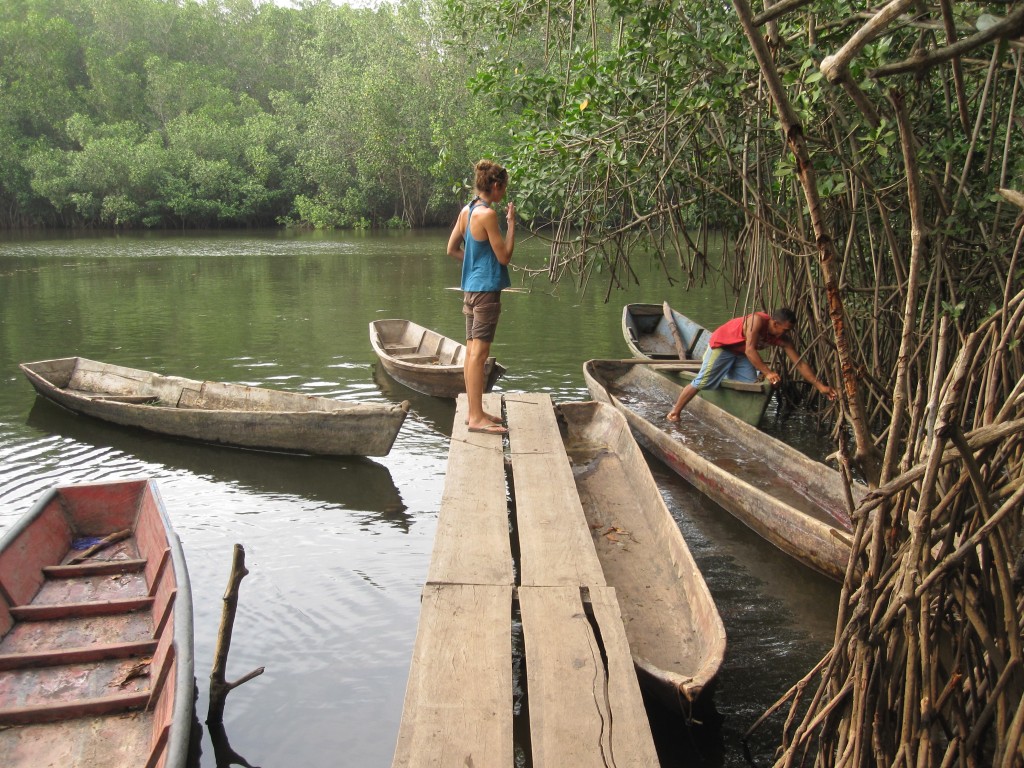 He happily pushed us about a mile downstream when he abrubtly made a 90 degree turn into a tiny opening in the mangroves, that to anyone else, would have just looked completely natural.  (see footage of us entering the mangroves below)

We then all had to help out and pull the canoe through tight spaces and under massive ancient fallen trees  by grabbing onto the mangroves while Yille pushed with all his might on his stick.  We finally made it to what seemed like a clearing, when Yille hopped out of the canoe and pulled us up to dry land.  He told us that this was the first of the Mayan mounds and it used to be where an ancient group of Mayans had lived and the clearing was where their houses and community buildings were built.  The whole site was littered with broken pot shards and he told us about a bone chilling tale of a cousin of his who had found gold, and the next thing he knew, a huge gust of wind came and  blew it away right out of his hands….Yille said his cousin refused to go back ever since. 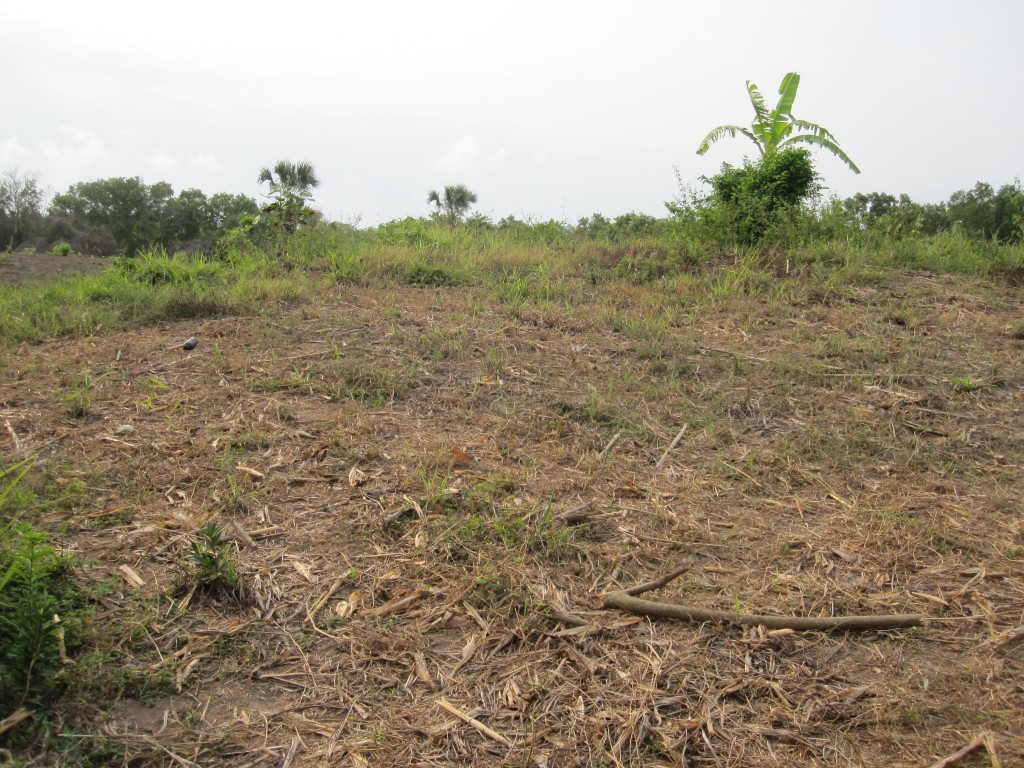 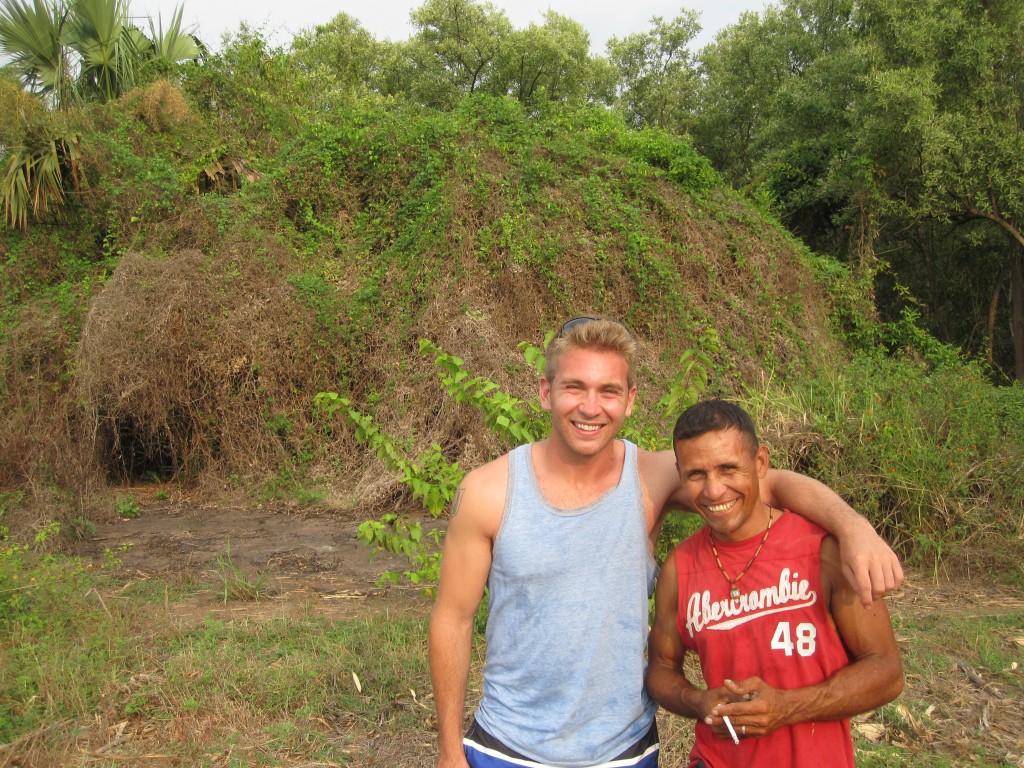 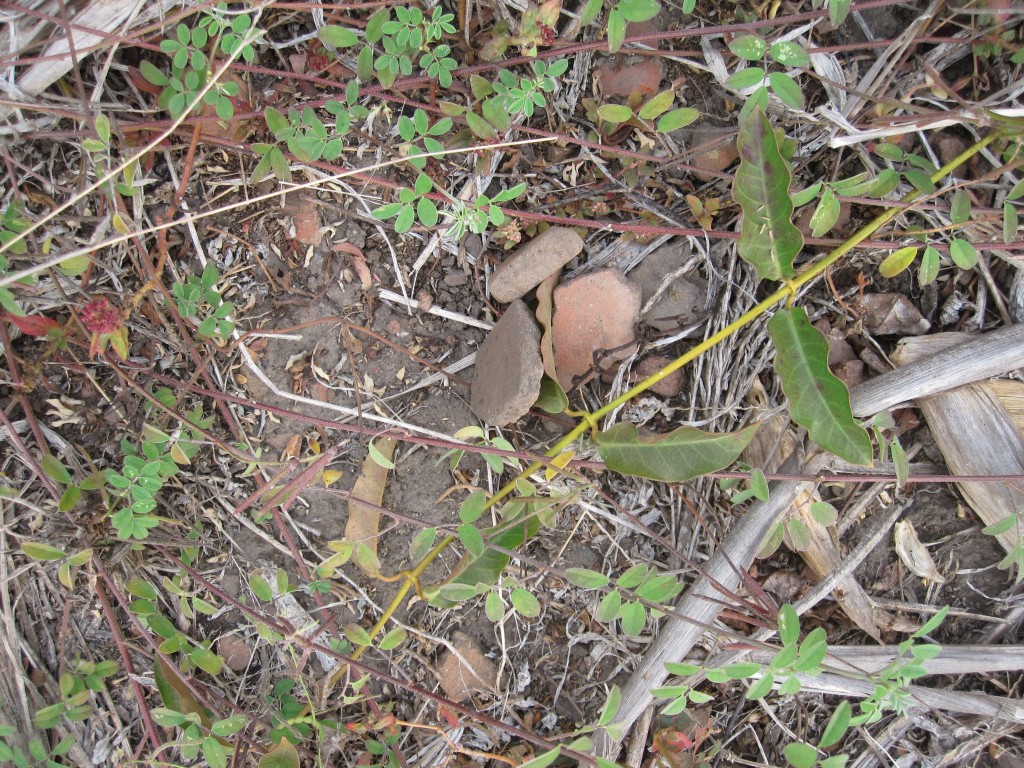 We then proceeded down a small path tooa second mound that Yilli creepily told us was where the Mayans buried their dead.  He said when there are heavy rains that sometimes he had seen bones popping through! 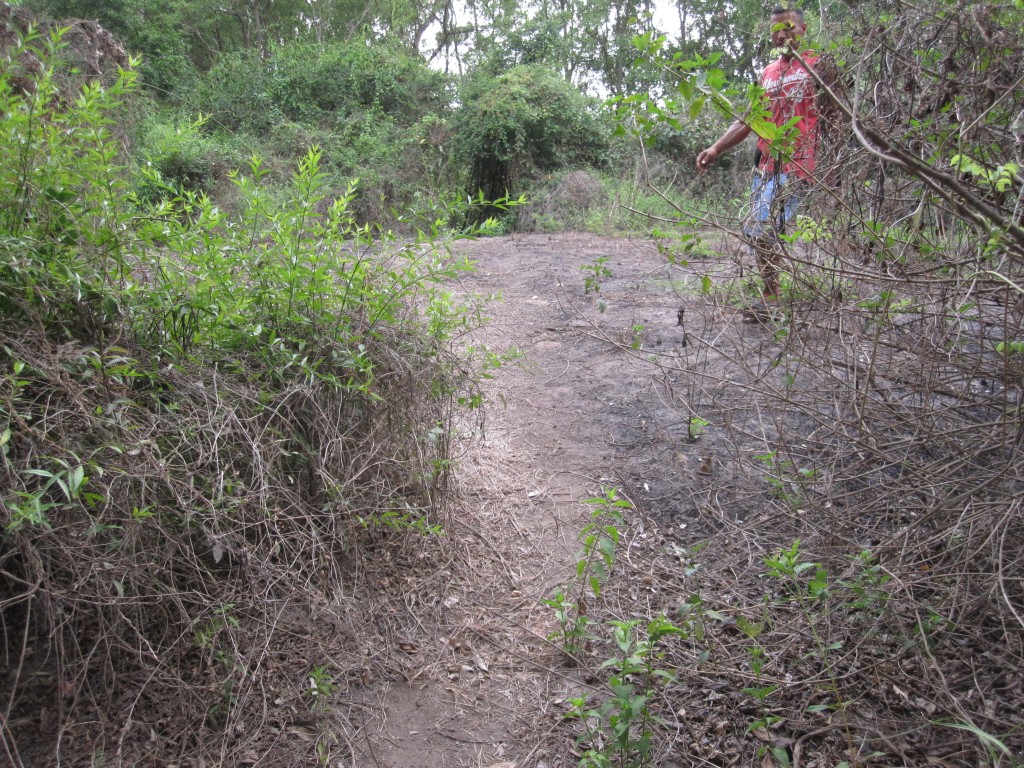 He then showed us one final mound that looked much like the first, but he said it was a mystery to what it was used for, most likely for growing crops like beans and corn.  The path to the last mound was beautiful and when there are heavy rains, it is completely inaccessible. 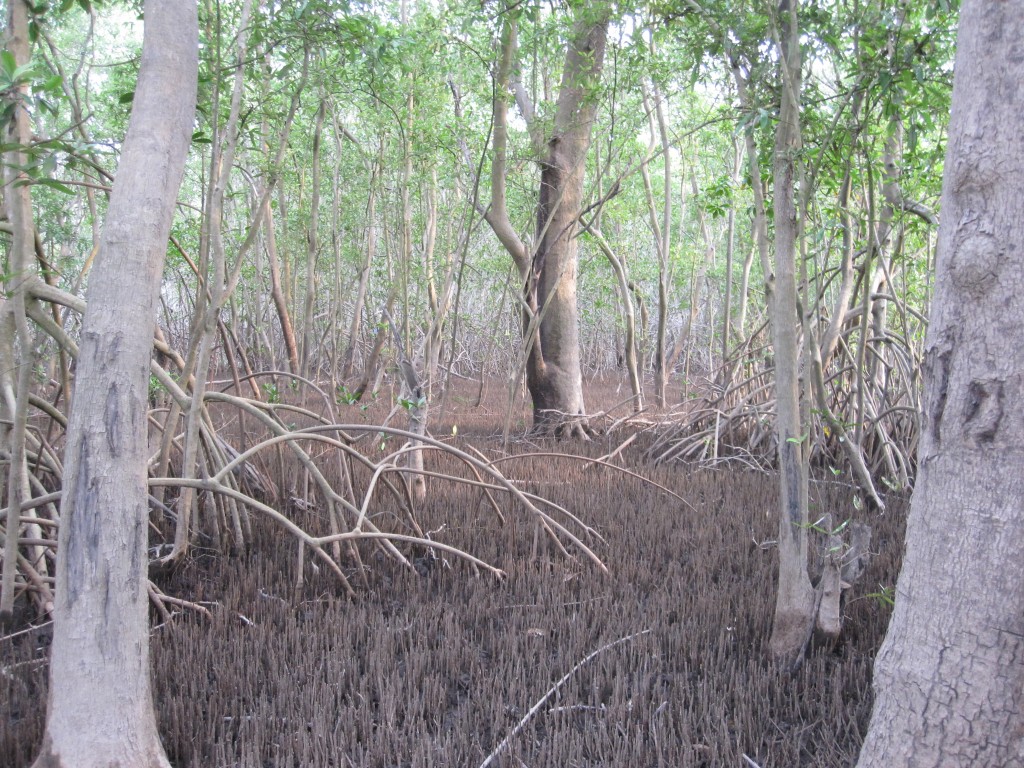 On our way back to the canoe, I started thinking about how awesome what I just got to experience was.  Virtually no outsiders had ever seen what I just di and that really excited me. After making our way back up the river, I was starving and the Surf House chef was more than happy to whip me up a delicious meal of fresh made sausage.  I spent the last couple hours of daylight sitting alongside the beach, drinking ice cold beers and watching the deep red and orange hues of the sunset electrify the sky. 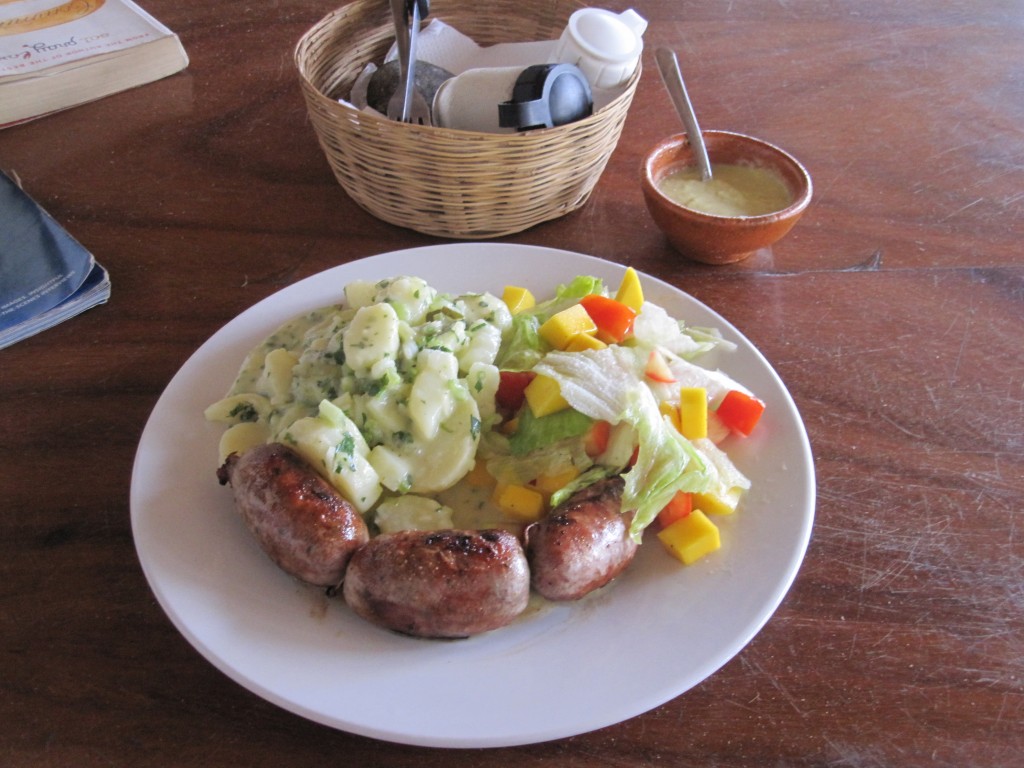