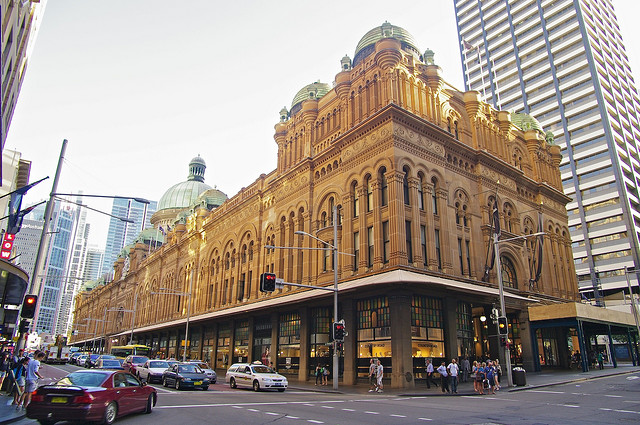 Sydney is the one of oldest cities in Australia and first served as a penal colony starting in the late 18th century when the British wanted to dump their miscreants somewhere. Since then, it’s grown exponentially from it’s rather unique beginnings to become one of the most diverse, clean, modern and desirable cities to live in the whole world.

Australia’s economy has also been doing extremely well recently with the growth of its financial markets as well as the extraction of natural resources. People get paid well, and that unfortunately means one thing for us backpackers, it’s expensive. Thankfully, the Aussies are big into the hostel culture and you can find Australia backpackers accommodation pretty easily all around the city and country at large, which you might want to opt for if you’re heading to Sydney (save the extra money for beer!).

Anyways, back to the photo of the week! This picture is of the Queen Victoria Building in downtown Sydney, which is a unique example of Romanesque Revival architecture. It was built from 1893 to 1898 (pretty old for Australia) and takes up an entire city block. It was originally designed to be a shopping center and after falling into disarray, was refurbished in the 1980’s. It now is home to shops again, mostly of the high-end sort and the city has ensured it will stand proud for hundreds of years to come.