Although British tourists only began to discover Torremolinos on the Costa del Sol in the 1950s, this former fishing village has a varied and fascinating history going back centuries. I think it would be great fun to uncover some of this heritage during a break here. 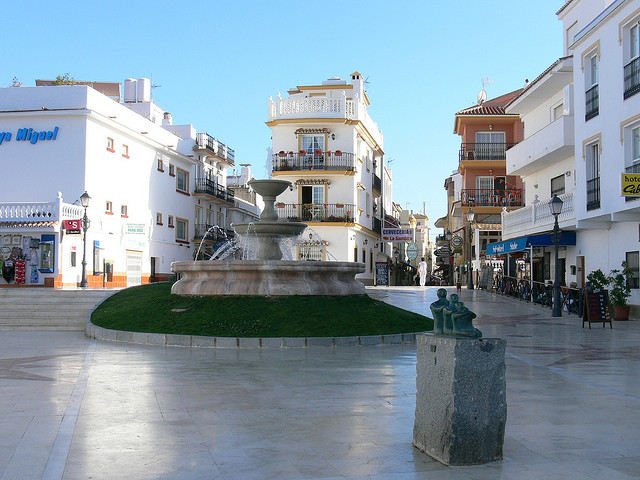 The History of Torremolinos: a look back

The first evidence of human settlement around Torremolinos shows that people lived in the region some 150,000 years ago, with finds such as axe heads, jewellery and human remains unearthed in a series of caves that sadly no longer exist. Neolithic people were thought to live here in 5000 BC, while the Mespotamians and later the Romans also inhabited this stretch of the Spanish coastline.

It was during the period of Roman rule, however, that Torremolinos began to grow in its own right, as it was an important stop on the road that linked Malaga with Cadiz. However, the name Torremolinos (which translates as ‘tower of the mills’) came about when the Arabs ruled the area, as they constructed mills along the stream that meets the coast here, as well as a defensive tower to protect the settlement from invasion.

In the late 18th century, Torremolinos’s defensive capabilities were ramped up with the construction of a fortress (Santa Clara castle) that contained, among other things, a battery of six 24-pound cannons, which had a range of approximately 6 km. This was in response to the growing pirate threat at the time.

The arrival of Sir George Langworthy in 1930 heralded the beginning of the booming tourism industry in the town, with the Brit buying the aforementioned castle and converting it into a hotel – now the Santa Clara Hotel. This sparked a wave of similar projects and by the 1950s, Torremolinos and the rest of the Costa del Sol was becoming well known as a holiday destination.

I find the whole story of Torremolinos’s development fascinating, and would definitely like to see a few of its remaining historical sites during a getaway here. One of the first places I’d head to is the archaeological site Cortijo del Tajo, which dates back to the Neolithic era, although Roman and pre-Roman artefacts have also been uncovered here.

In the grounds of the former Campamento Benitez military base, meanwhile, you can see what remains of one of the dried fish trading posts that used to be an important part of the local economy during the period of Roman rule.

One of the most obvious historical sites in Torremolinos, though, is the tower that stands at the end of Calle San Miguel. It was the Torre de Pimental, as it’s known locally, that helped give the town its name.

Even if you’re not staying at the Santa Clara Hotel, it’s well worth heading to the former castle to have a look around, given its historical importance. Incidentally, if you’re still looking for accommodation in Torremolinos, check out the deals available through Vacenza. Going back to the Santa Clara Hotel, you could come here to enjoy a meal at its restaurant or a drink at the bar. However, I think one thing you shouldn’t miss out on is taking a stroll through its gorgeous gardens.

As you can see, Torremolinos has a rich heritage and more historical sites than you may imagine when first you conjure up images of this Costa del Sol resort.