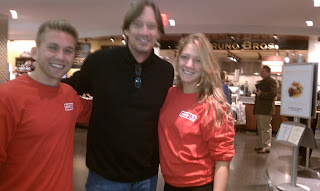 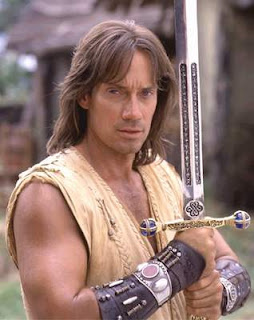 It was a seemingly normal work day. I was managing a promotion for Comcast in downtown Philly and my team and I were on our much deserved lunch break at the food court under the Comcast Center just talking and eating. The next thing I knew a rather grizzly looking man walked by as he squinted to make out the sandwich descriptions on the menu board next to me. For some reason this man seemed vaguely familiar, as if I had seen him before. His chiseled chin and feathered hair began to suddenly flood my head with memories of epic battles, lightning bolts from Olympus and minotaurs with tridents. As a huge smirk stretched across my face I looked across the table and one of my co-workers just looked back at me with glowing eyes and began nodding not saying a word. I knew definitively who we were dealing with. KEVIN SORBO!!!!! The next thing I knew, my friend Kelly and I were bothering him as he tried to eat his lunch for autographs and pictures to which Hercules himself happily obliged. He knew it had been a while since the limelight so it was probably in his best interest to acknowledge any previous fans that still had the courtesy to point him out. It was a great day and my dad was very mad he wasn’t the one who got to shake the hand of a half man/half god.

It's Not 1993 Anymore - Ditch the Timeshare!
Photo(s) of the week - Wrath of God Weather in Miami
How to Save Money for Traveling