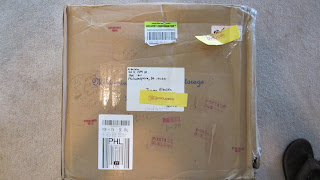 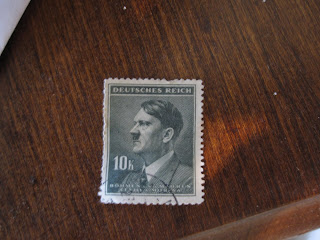 So in my process of moving back to Philadelphia for a few months from Miami, I completely forgot about a package that I had sent to myself. It was basically just a box of crap containing a sleeping bag, the “too new” pens and office supplies from my  desk arrangement that I didn’t have the heart to toss in the trash and my dad’s old stamp collection that he said I should just try and sell for a few bucks. Well, after about 2 months of the package being lost in USPS purgatory, and maybe just a little help from Hermes, the phantom parcel arrived back in Philadelphia where it started. Part of the problem was that when I sent it, the return address I used was from my parent’s old home (which they moved from) therefore it had to be redirected to their new apartment, and somehow vanished in the process. Well as you can see from the box, it made quite a few trips. When I picked up the package and brought it up to my apartment, the first thing to flutter out of a ripped corner was a Nazi-era Hitler Stamp, his facial expression is Führer-ious, probably for the death march he endured the last few months. Oh well, I guess the best thing I learned from all of this is if you have something you might want later, but don’t want to pay for storage, just ship it to somebody and tell them not to accept it, you’ll get it back in a few months…probably.