Stories of hauntings have likely been around as long as people have been able to tell the stories. In every part of the world you can find land, homes and buildings that carry with them stories of spooky goings-on and strange visitations. Today, teams of “scientists” are traveling the world, trying to prove or disprove many of these legends. The journeys of some of these intrepid scientists have been documented in various television programs, which allow the general public to become more familiar with these haunted places, some of which are startlingly close to home.

The Niagara Falls area has not escaped this spooky scrutiny. Legends of untimely deaths, murders and massacres have morphed into stories of hauntings that plague locations around Niagara Falls. Both Canada and the United States can lay claim to these stories, and some locales have even been tested by famous ghost hunters. On your next trip to Niagara Falls (see here to find great deals) explore these creepy places — if you dare. 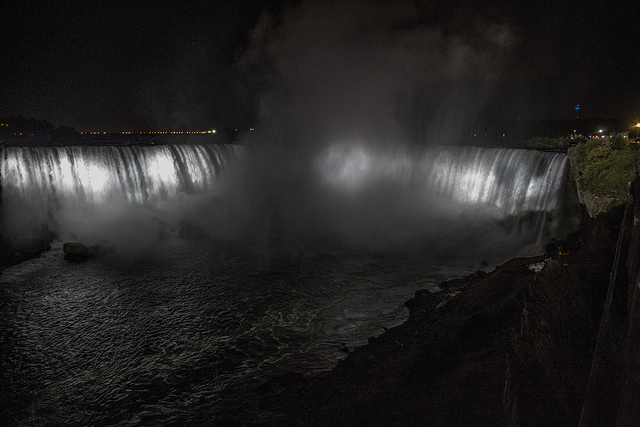 Niagara on the Lake

Often referred to as Canada’s most haunted town, Niagara on the Lake lays claim to some of the spookiest and scariest sites in the entire country, including:

The Screaming Tunnel. This culvert in northwest Niagara runs beneath the Canadian National Railway tracks and has quite the storied past. Legend has it that a young girl fled her nearby burning farmhouse and died in this damp stone drainage ditch. Some people say that if you visit at night you can still hear her agonized screams. Part of the film “The Dead Zone,” which is based on the Stephen King novel, was filmed here as well. David Cronenberg, the director, felt that the location emitted a perfectly creepy feeling.

Butler’s Burial Ground. This cemetery is named for the founder of Niagara on the Lake, Mr. John Butler. He was the leader of a notorious rebel group, Butler’s Rangers, and most of them were buried here. Legend has it that their coffins rose to the surface mere months after they were buried. Today many visitors report visions of strange apparitions and eerie noises that seem to come from nowhere. Paranormal experts have recorded these sounds and have also taken photos of strange, misty figures and orbs of light, as well.

Old Fort Erie. As the oldest British fort in the region, many residents of the area believe that Old Fort Erie houses the ghosts of soldiers who died there during the War of 1812. As this fort is the site of the bloodiest battle of the entire war, those residents just might be right. Tours of the fort are seasonal, but the restaurant located on the grounds, the Old Bank Bistro, is open year around. The owners and many of the patrons have reported seeing the ghost of Richard Baxter, the former manager of Sterling Bank who died in 1926.

Devil’s Hole. This cave located alongside the banks of the Niagara River is certainly not a traditional haunted house, but for those brave enough to make the hike through Devil’s Hole State Park to get there, you’ll be visiting one of the most haunted places in the region. Legends say that a number of British soldiers were murdered by Seneca Indians here in 1763, and visitors claim to see apparitions and hear voices that speak other languages. These strange occurrences have been seen during all hours of the day and night.

Frontier House. The Frontier House in Lewiston, New York has a long and mysterious history. It was built in 1824 to serve as a hotel and stagecoach stop and hosted many celebrities of the time. The Frontier House was also the place where a notorious criminal was held before his transfer to Fort Erie. It is said he was later brought back to the Frontier House and murdered. Legend also states that a construction worker who was assisting on renovations several years ago fell to his death. His coworkers, rather fearful to explain the death to the bosses, buried him within the stone and mortar of the foundation and claimed that he had simply left.     In recent years, several companies, including McDonald’s, have attempted to do business at the Frontier House site, and virtually all of the patrons claimed to have experienced some sort of paranormal activity.

For those visitors who have an interest in the paranormal, the Niagara Falls area is one of the best places in the country to do so. There are several tour companies who specialize in the darker side of haunted Niagara Falls, or you can visit one of the locations on your own, if you’re brave enough.

Do I need to apply for an ESTA Visa?
Quebec City - North America's Most European City
5 Reasons Why Europe is Better Than America!