The last leg of my three legged mutant adventure took me to the kooky capital of Germany, Berlin. I have a couple friends living there so I thought it be the best place to visit for one good last romp before heading to my semi-home of Miami.

I flew in from Krakow, Poland on Air Berlin (which is a legit and cheap airline, screw you Ryan Air) on a propeller plane.  It made scary noises but was just as comfortable as any other jet. When I arrived, it was dark, cold and rainy, much different than scorching and sunny Poland, but I honestly needed some weather that I wouldn’t sweat through 3 pairs of underwear a day.

I spent my first night at my friend Felicia’s place.  She lives on the outskirts of the center in the western part of Berlin which was the much better off half of the city up until 1989 when the Berlin Wall got kicked down. The following day she gave me a little walking tour and we went to a really cool artists’ commune in an abandoned building called Kunsthaus Tacheles (located at 54-56A Oranienburger Straße, Berlin, 10117). The building is on a pretty swanky restaurant/bar street and looks quite out of place. It’s completely tagged with graffiti and when you go inside, each floor is occupied by various artists selling their works, crafts, smoking weed and drinking beers.  But everyone is friendly and happy to have you there.  There is also an ultra-hipster bar on the second floor (just follow the music towards the back), complete with 5th hand furniture and patrons with plastic rim glasses. The building was built in the early 1900’s and housed everything from a Nazi prison to a theater, but in 2011, it was finally “shut down”, but the artists have yet to vacate, and the city has yet to remove them.

The next day, I said adieu to Felicia and headed into the city center to go on walking tour with fellow blogger, Becki from BackpackerBecki.com. She found it and did a great job.  We had a very knowledgeable Scot leading us and a few others on a pretty all-encompassing 4 hour tour.  We started at the Hackescher Markt, meandered our way down the historic road, Unter den Linden (literally means under the Linden ((which is a type of tree the road used to be lined with))), past the iconic Brandenburg Gate, through the Holocaust Memorial, along a piece of the preserved Berlin Wall, said whatup at Checkpoint Charlie and finally ended at the Gendarmenmarkt which is one of the best preserved squares in the city.

If you’re not aware (as I really wasn’t), Berlin was basically blown to smithereens in WWII.  Almost the whole city has been rebuilt after the 1940’s when the city was divided between Russia (the eastern part) and the Allied Forces (the Western part).  West Berlin enjoyed democracy post WWII, but was considered  a “free” island  in a sea of communism as it was surrounded by East Germany. The modern day Germany as we know it wasn’t unified until the country was finally joined with East Germany on July 1st 1990. East Berlin and East Germany are visibly different from West Berlin and West Germany. (I know it sounds confusing but check out the map below which will help clarify the divisions).

Part of what makes Berlin so cool is how visibly different the east and western parts of the city are.  You find wide avenues and classic European architecture in the west, but the east is overwhelmingly covered in Soviet Era concrete block housing which for the most part is pretty ugly on the outside (people have refinished most of their interiors to modern standards today). Many buildings in the city center are still littered with bullet holes from the Battle of Berlin which adds an eerie/unique aspect to how much the city has endured in the past 60+ years.

After the tour, Becki and I met up with one of my old roommates from Buenos Aires, Christoph to go watch the Germany vs. Greece Eurocup 2012 match. The game was especially poignant for the Germans (especially because they bailed the shit out of Greece). They had an area called the Fan Zone which begins at the Brandenburg gate down the Straße des 17. Juni for a couple miles.  It was mayhem, and we all had a great time, including pissing in the woods because of the lack of Johnny on the spots. 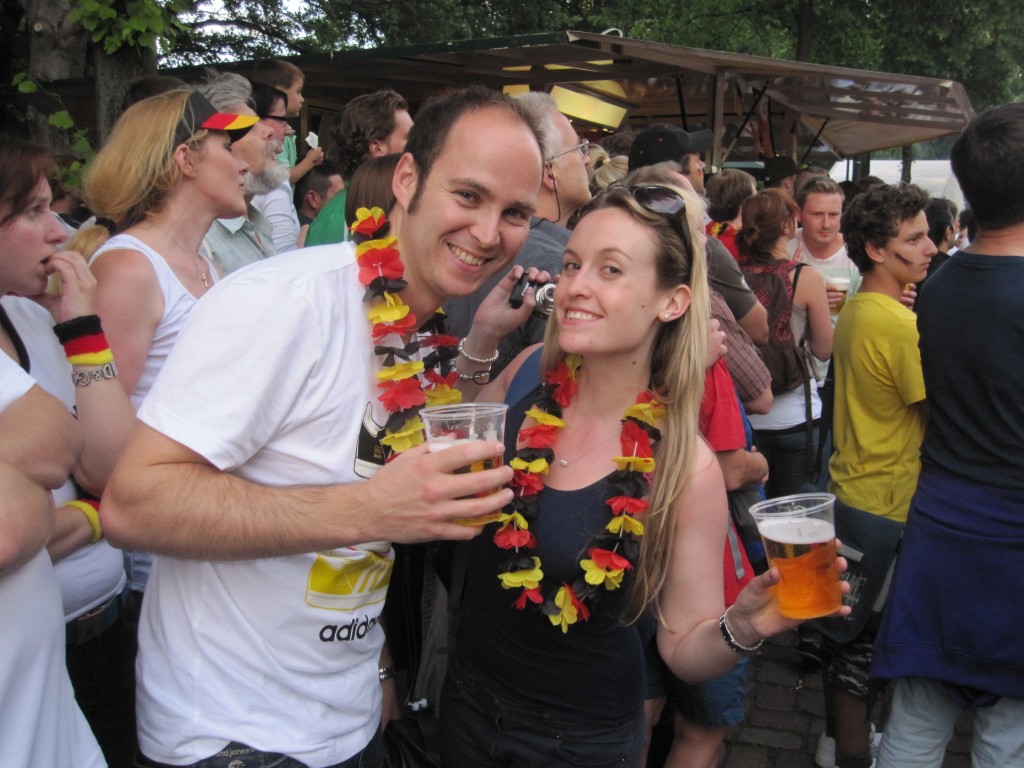 The next few days I spent staying with Christoph in his pretty awesome apartment in East Berlin.  It looked like shit from the outside, but the inside was massive with high ceilings, modern appliances, etc. and he said he only paid around 600 Euro/month. Berlin is pretty cheap.  Way cheaper than any other capital city I’ve been to in Europe (well maybe minus Sofia). The city is full of bohemians and artists and is known for its counter culture and youthful existence.

The public transportation system is great and everyone uses it making the streets easy to cross and not full of traffic which is a nice change. They have a bicycle rental program and if you’re a member (Christoph is), you can take  out a bike for free for a friend on the weekends which I found pretty awesome.

Berlin is not known for it’s beauty, but for its culture, and especially its nightlife.  While we decided to not opt for some crazy ass warehouse raves, he took me to some awesome restaurants, including one called The Bird (American owned baby), which served one of the best burgers I’ve ever had.  We also went to some secret bar (I just say that because I forget the name!) in some old apartment building that had a 70’s living room feel, 2 euro beers and a good dj.

Another thing me and ole’ Christoph Van Helsinghaugherstrasserstruedel did was check out the Mauerpark Flea Market on Sunday.  It goes down every Sunday and is a true representation of what modern Berlin (and for the most part of its history) is. Hipster delights include artisan food truckesque grub stalls, live music from pretty legit indie street performers (mostly from other places), live theater, a big ass live karaoke, a “beach bar”, vintage goods and boobs without bras.  It’s definitely something authentic to check out.

Keeping in the Berlin spirit, I had the pleasu…opportunity to check out the gay pride festival for Christoper Street Day (a European LGBT festival). I live in South Beach and am no stranger to wild gay parades, but this one topped them all. It was actually a pretty awesome time and some of the best people watching ever.

All in all, I had a very cool time in Berlin. I suggest you visit as it’s a pretty impressive city from the human element. Don’t expect to see the clean streets of Chicago or the architecture of Paris, Berlin is not that. But go with an open mind, an adventurous spirit, and you will surely have a memorable experience. If you want to stay more like a local, check out Berlin vacation rentals to opt for an entire flat for around the same price as a hotel or less. Click here to check out some more of my pics of Berlin.

3 of the most interesting ghost towns in the world
The Best Neighborhoods in Mexico City - Juarez!
Top 10 Attractions in Greenland