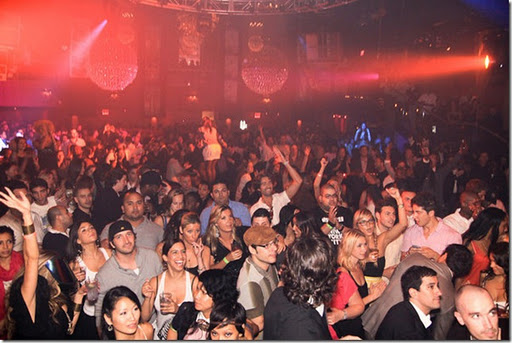 The city that never sleeps? Well, who can blame New Yorkers when there are nightclubs to see and be seen in, toe-tapping rhythms escaping from basement bars and breaking indie acts gracing the stage of New York City’s legendary concert halls.

No indeed, there is no time to sleep here. But if you do require a couple of hours of shut-eye, be sure to find cheap hotels in New York within stumbling distance of some of these, my pick of the 10 best clubs in NYC…

With a capacity of just 550, this is THE place to catch breaking acts before they hit the big time! Pattie Smith was a recent NYE resident and the much coveted Lana Del Rey performed her first proper New York City concert here. As the crowds get cosy and sweaty together on the dance floor there are tables and booths perched about the surrounding balconies as well as an Art Deco basement bar. Expect two headliners on Friday and Saturday nights with the main performer donning the stage at about 11pm.

This one’s for the jaaaaazz-lovers, this unpretentious venue delivers live music 7 nights a week from 9:30pm. There is raw West African music on Saturdays and musicians tend to ‘drop in’ after their previous gig commitments for a jam session that keeps this historic Harlem joint swinging until 4am.

One of Brooklyn’s many warehouse conversions, this 16-lane bowling alley in Greenpoint is also the place to eat, drink and shimmy with live acts most nights playing to a dance floor complete with disco ball. The onsite restaurant Blue Ribbon delivers American dining fried chicken and milkshakes and there are decent local Pilsners on tap. Open 7 days a week it has lax closing hours but generally 2am on Fridays and Saturdays.

Cat Power, Dave Chappelle, Gillian Welch; they’ve all played here at what was once a 99 cent discount store. Nestled among Brooklyn’s fashionable Park Slope strip it might seem like a no frills rock club but the elegant cocktails are in a different class. Its affordable drinks and gig listings pull a local crowd.

Up for a challenge? Try the door policy at Ph-D. If successful, the reward is a view of the Empire State Building from the roof terrace, beautiful people idly lounging and an interior dripping in all that glitters. One suggestion is to arrive at this upmarket venue before the velvet ropes go up at 8pm. It’s a smart place but lurking at the bar will avoid table service and do try and resist the $18 cocktails if you are on a budget. The penthouse-style disco is open until 4am.

Built in 1886, this entertainment venue has lived through Prohibition and is now one of New York City’s staple nightlife spots. In its best light it hosts top music acts while some of the studenty club nights come dangerously close to cheesy with free admission for the ladies on certain evenings. The bar downstairs is a bit cheaper than the other floors and the secret mirrored hallway is worth seeking out. Aside from the long queues they have a relaxed door policy.

And the award for the best sound system goes to…Cielo! Every inch of this place has been purpose-built for quality sound snobs. Decorated with one of North America’s first Funktion One systems, Cielo prides itself on the latest and greatest of equipment which in turn attracts top DJs including Louie Vega’s Roots nights and house and techno. Come wrap your ears in what is clubbing’s cotton wool sound quality.

If you like your nightlife with a splash of culture, Le Poisson Rouge does its best to ‘serve art and alcohol’ blending gallery, theatre, cabaret, dance and music in to a well-rounded evening of entertainment. Programming is eclectic (from Phillip Glass to Afrika Bambaataa, from Florence and the Machine to Four Tet) but thankfully affordable.

A 30,000 square foot venue makes Pacha a little more than a slice of Ibiza in New York City. Some of the highest paid DJs in the world make a detour from the Balearic sun to pump up a dancing frenzy at this megaclub outlet. If it’s your thing, expect showering go-go gals, lasers, glow sticks and – Ibiza classic – overpriced drinks.

This mayonnaise factory became a multimedia arts and after dark complex in Brooklyn. They honour burlesque nights, rap battles, film screenings, heady bass nights and their gay Pride party is always one to remember. The interior bares all the industrial warehouse conversion signs with high ceilings, shabby whitewash walls and a long bar. Look out for happy hours between 7-9pm for two-for-one deals on drinks.

What’s your favorite place to go at night in NYC?

“The 10 Best Clubs in NYC” is a guest post from Madeleine Wilson, a travel writer and editor of the HostelBookers blog.

Best nightlife spots in Ireland
Spending a Holiday in Malia, Crete (The Inbetweeners did it!)
Win a free trip to NYC with Passion Passport!