Now that I’m back in Amurica, I need to find things to pass my days with until the next big adventure. Believe it or not, I actually have an office space now for all of my online endeavors which puts me almost, ALMOST on a normal 26 year old’s working schedule. That means I have the weekends “off” like the majority of people. So, what did I decide to do on my Sunday besides go to Target and watch football all day? Ride my motorcycle into the setting sun…(well it was only 1 PM, but in that direction). 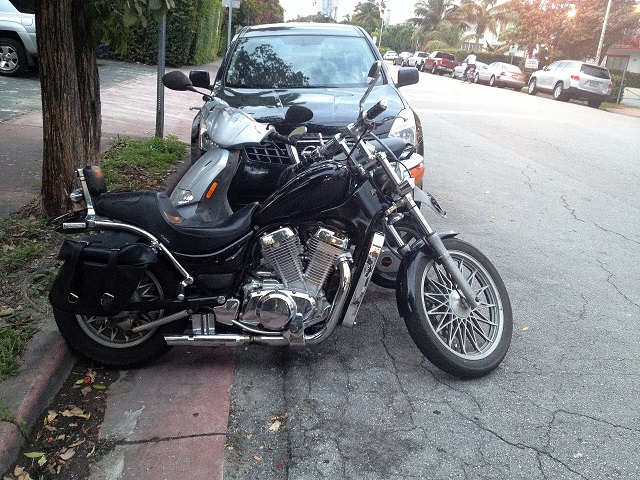 I bought my motorcycle about a year ago after having so much fun riding them on my overseas trips. It’s a 1986 Suzuki Intruder (older than me), and I just started feeling comfortable enough to take it more than a few miles from my apartment without the fear of it crapping out on me like it used to when I first bought it.

So, I woke up, ate breakfast, strapped on my boots and hit the road westward from Miami Beach towards the Everglades (swampland west of Miami). The highway was pretty much empty so I could open up a bit (scary enough, let alone on an old bike).

My mom is going to crap her pants and leave some self-indulgent comment after reading this) but on a flat open stretch with no cars, good road and no place for a copper to hide out, I got it over a hundred. It was a real rush as around 70 mph, the wind isn’t that strong, but after 90 you really feel like you’re on a rocket ship, it was awesome.

When I made it to the Everglades, I turned south on Krome Avenue which is basically the last road in Miami-Dade County. It’s known for a few things like the Miccosukee Indian Reservation (a few houses, casino and place to buy tax-free cigs), industrial complexes (primarily concrete) and the Krome Detention center where illegal immigrants are held before they’re deported.

I had only been out here once in my 7 year tenure in Miami, and that was on a field trip in college, so everything seemed pretty new. The road basically just cuts through the wilderness so it’s a pretty scenic ride (there were plenty of people on motorcycles doing the same thing as me).

I was riding for a few minutes when I noticed a small clearing on the side of the road that had a few concrete barriers tagged up with spray paint. I don’t know how I saw it going at 60 mph, but in my quick glance to the right, I could see what appeared to be a road on the other side of the barriers. I thought for a few seconds, should I check it out or keep riding? Figuring I mind as well make an adventure out of my ride, I circled past and parked my bike. 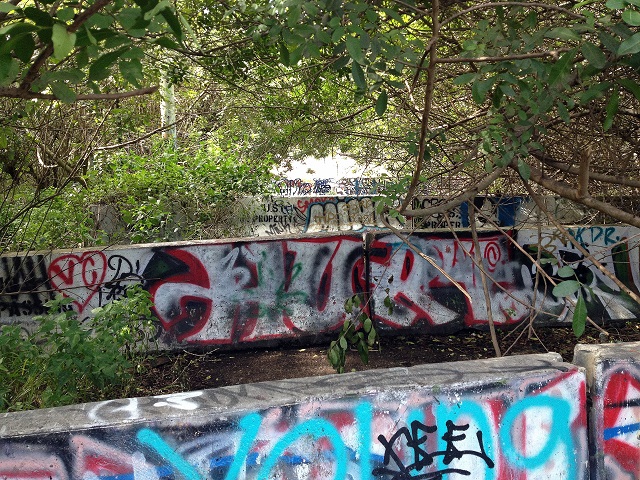 I hopped over the barriers with relative ease, but for some reason I was scared there were going to be snakes or gators (hey, that’s a legitimate fear in the everglades!) I didn’t see any thank god. When I made it to the other side of the barriers, I saw what appeared to be a guard house. “Where am I?!”, I thought to myself as I kept on walking down the overgrown roadway, further away from the din of passing cars on Krome Avenue. 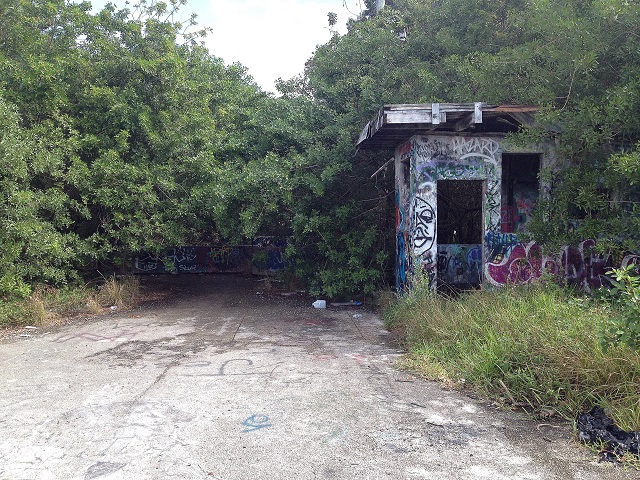 After ambling for a couple minutes, I came upon what appeared to be a former parking lot. There was a ton of litter everywhere, but just like in Indian Jones, I noticed some crunching under my feet, but I didn’t have a little Asian sidekick saying, “feel like fortune cookie Dr. Jones!”

When I did look down, the hairs on my neck stood up, because while fortunately the crunching noise wasn’t foot long centipedes, it was the sound of empty shot gun shells and hand gun rounds. 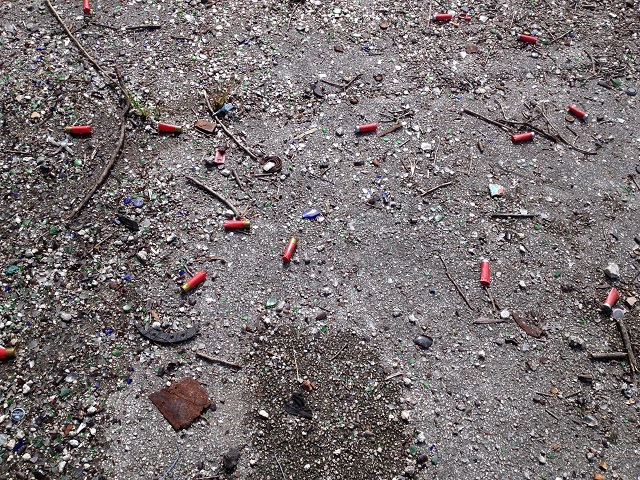 I immediately looked up and scanned the area. I let out a loud “hellloooo, is anyone here?” The last thing I wanted to do was get blasted on Sunday Funday, and for no reason. Nobody responded, so I figured I was probably safe. I walked across the lot cautiously until I reached another concrete structure. This one was much larger than the guard house. 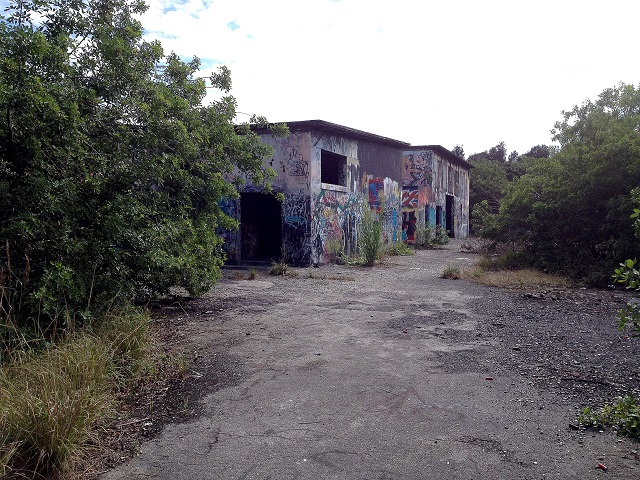 Figuring I had gone this far, I gulped and walked inside the door-less structure.

***Before I go on, I would like to state now that I’m a pretty big pussy when it comes to this kind of stuff. If you are unlucky enough to go to a scary movie with me, you better plan on having my sweaty, clammy hands vice-gripped on your forearm, or, 90 minutes of straight making out so I can avoid watching the screen as much as possible.


When my eyes adjusted to the lack of light, they pretty much grew to the size of saucers. I asked myself again, “what the hell are you doing?!”, but for some reason I just kept on, motorcycle helmet tight in hand just in case I had to knock out any poltergeists, ghouls, specters, doppelgangers, aliens, or blood-thirsty heroine addicted zombies. 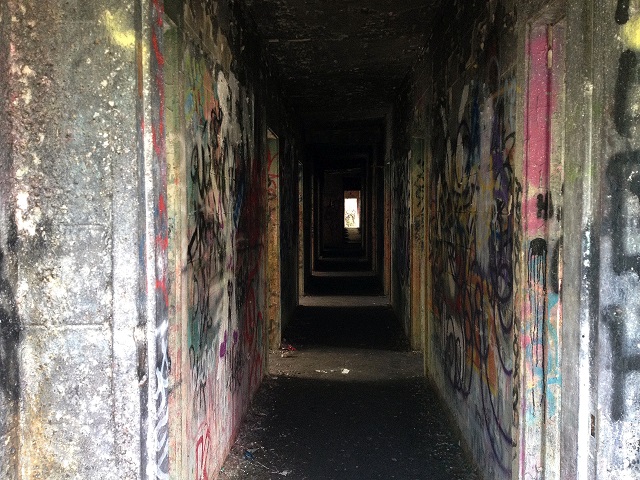 Shaking in my boots, literally, I kept on keepin’ on down the dark, ominous hall that looked like something out of a Saw film. It appeared that I was in some sort of barracks as there were a bunch of rooms, equally sized. 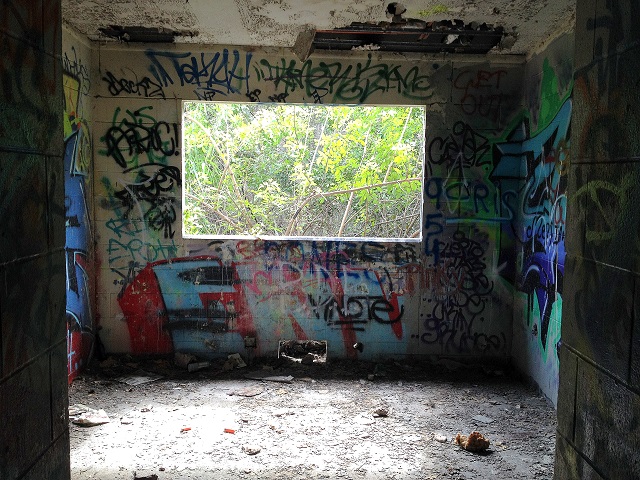 When I made it to the end of the hall, it opened into a much larger room with a strange set up on the ground. It looked like it could have once held water or the base of something larger. There were also some strange circular holes in the wall. 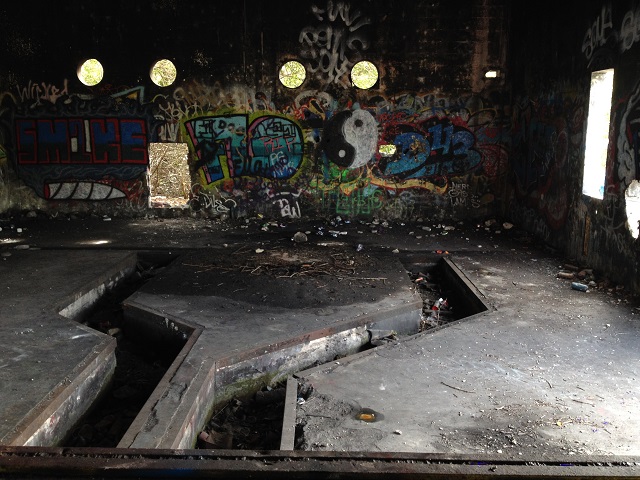 I exited a hole in the wall and made it back onto the haggard road and headed back for the guard house. As I got closer, I could hear people talking on the other side of the barriers. I was wondering why they would have stopped there so I put a pep in my step to get back as quickly as I could, without scaring the crap out of them as I popped out of the woods.

There were two people with cameras and what appeared to be a model. One of the photographers asked me, “were you just back there by yourself?”. I said, “yea, why?”. He said, “you’ve got balls man, that’s an abandoned insane asylum!”. Once again my eyes opened wide, and I thought to myself, “I knew you were crazy for going back there!”.

I got on my bike and rode back towards civilization. When I got home, I typed in, “abandoned insane asylum in Miami” and a few results came up. The place I “discovered” earlier that day wasn’t in fact a former insane asylum, but actually a former cold-war era Nike missile base (which is even cooler in my mind).

I found out that the former Nike missile site was built in 1965 after the Cuban Missile Crisis. Like the majority of other similar sites in Florida, it was split into two parts, the actual missile launching facility and the radar communications and control facility, which is what I stumbled across. Here is what it looked like in the 1960s. 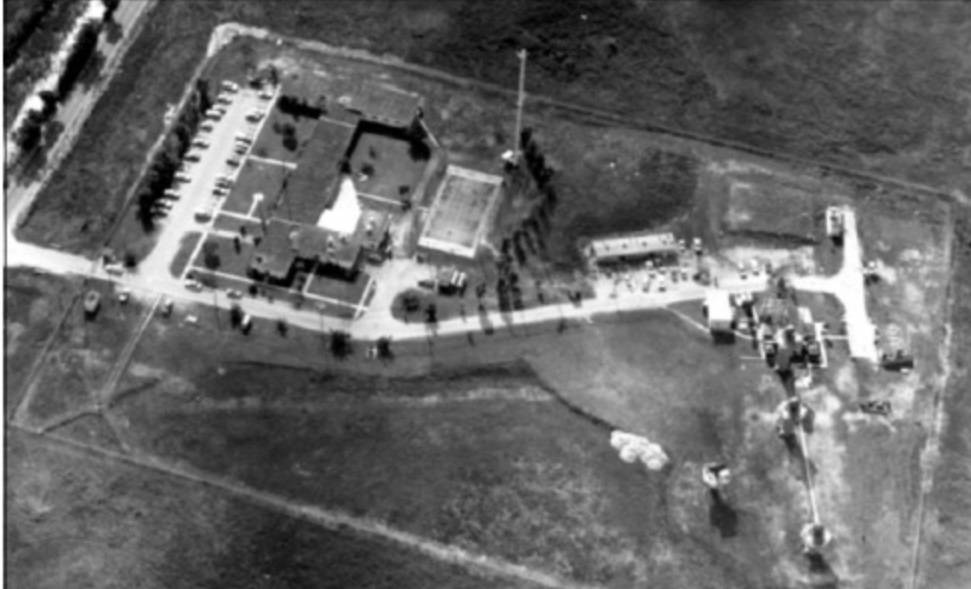 By the late 1970s, the threat of nuclear warfare via Cuba fizzled, and the Nike missile bases in Florida were dismantled and abandoned. This specific facility was reopened again for various reasons including a refugee camp for Haitians and other militarily purposes, but after Hurricane Andrew in 1992, it was officially left to its own devices. Now a days, people play paintball there, and I guess shoot shot guns.

It was a really cool experience discovering an old Miami relic, and especially one with a Cold War history. After being in Miami for 7 years, I figured I’d seen it all, but I guess all it takes is a rebel spirit, a beat up old motorcycle, and an open Sunday and anything is possible! Here’s the route I took and where the abandoned army base in Miami is located: 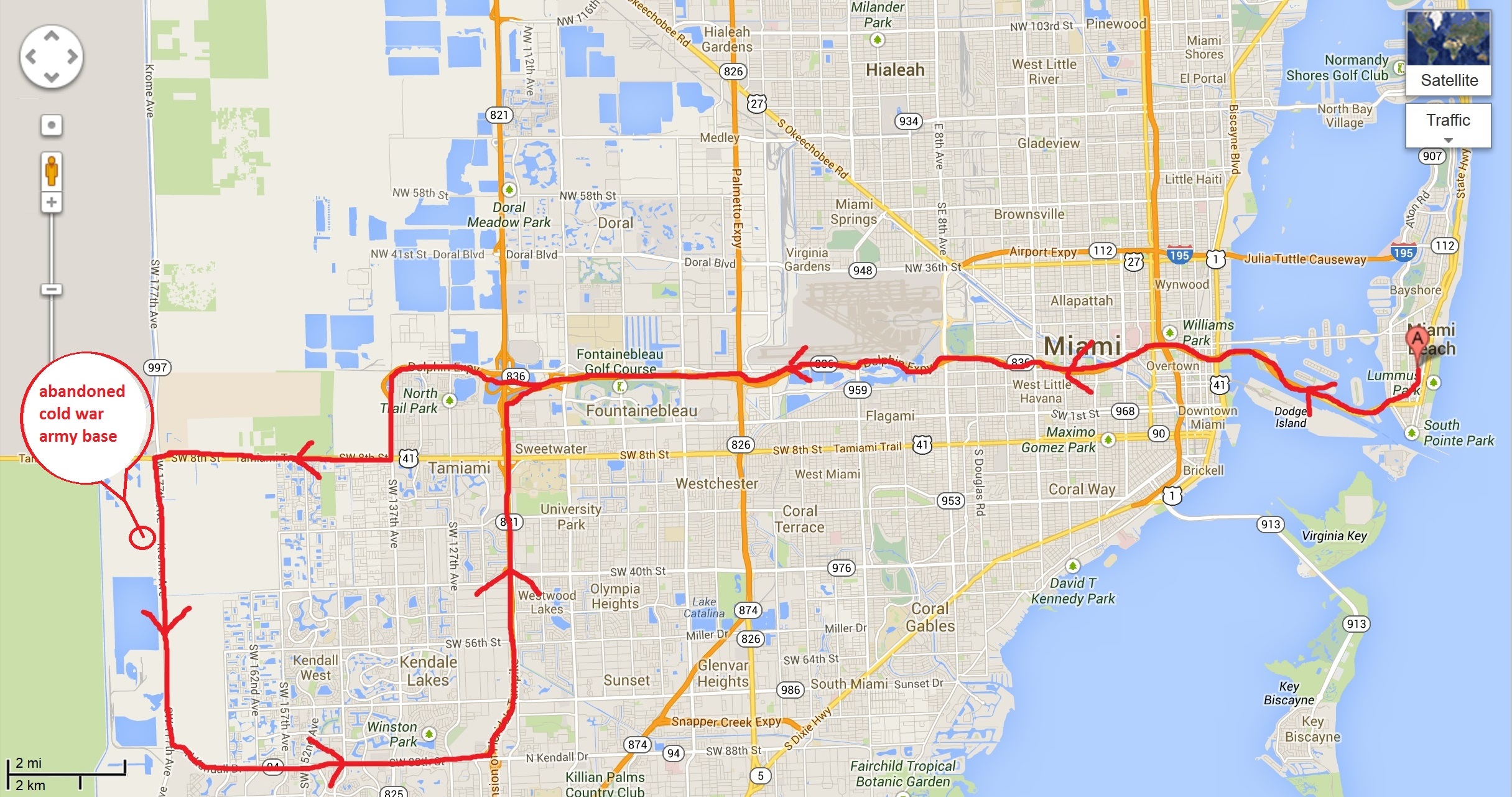 Picture of the Week: Wine Tasting in South Beach
Should You Buy an Air Conditioned MC Helmet?
Photo of the Week: Cruise Ships in Miami