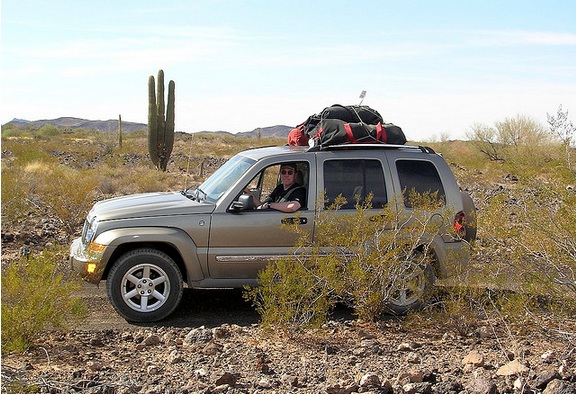 For Jeep enthusiasts, there is one glorious advantage in going south of the border; even the main highways have a tendency to be like taking an off-road. While paved, they are not repaired very often or very rapidly, except close to and within the cities. In the long stretches between major towns, the road is cracked, filled with pot-holes, and often has stretches that are more gravel than pavement. Nor is there a great deal of traffic in the less populated areas as the rural population, and much of the urban counter-parts, depend on Latin America’s burgeoning bus system.

Hopefully, the violence that has seized Mexico in recent years will simmer down, as Mexico is a wonderful place to visit, and a fabulous opportunity for the off-road driver. As soon as you pass Monterrey, you begin to see a number of gravel and dirt roads that wander away from the main highway system. Since it is a desert area, these roads are usually easily navigated, even with two wheel drive, except during the rainy season. Nearly all dirt roads will carry you to Indian villages, and each village is remarkably different in its customs and type of industry.

Each village has its specialized occupation. The area around Monterrey consists mainly of villages that grow and attend to grapes for Mexican wine production. Dropping down into Michoacan is a trek through a rugged mountainous area, where farmers produce the largest avocado supply in the world. The off-road trails are highly challenging, meandering through dense brush, loose dirt, and over uneven surfaces littered with boulders. While best known for farming and as a tourist attraction to its spectacular beaches, Michoacan also produces some of Mexico’s best hand woven blankets. Unfortunately, it is also one of the states involved in gang warfare, so extreme caution should be taken in visiting the region.

The real fun begins south of Mexico City, where pyramids rule and ancient ruins are an everyday occurrence. By staying on the Gulf of Mexico coastline, you can visit a number of pyramids, including the amazing temple of Campeche, built into cliffs facing the ocean front, and the famous pyramids of Quintana Roo. However, for the Jeep enthusiast, the most interesting area would be the states of Oaxaca and Chiapas. 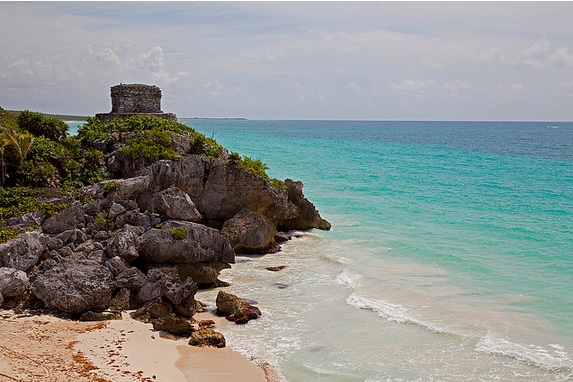 Oaxaca is an amazingly diversified state. Its capitol city, with a population of about half a million, sits in a crown surrounded by mountains. Oaxaca City caters specifically to tourism, so has a large English speaking population. It is close to the ruins of Monte Alban and Mitla, as well as the amazing Hieve de Agua, which contains a pre-Hispanic irrigation system and a petrified waterfall.

The most harrowing off-road in Mexico is located in the State of Oaxaca. This narrow, unpaved road travels approximately one hundred miles through high mountains, around sharp, snaking curves, with high cliffs on one side and plummeting valleys far below, to reach the tiny town of Huautla. Huautla Jimenez is most famous for its caves, the twelfth deepest in the world, but it also contains one of the most spectacular early Mayan technical achievements yet uncovered. A brick and mortar road, with graduating steps begins at Huautla and travels through the mountains to the port of Veracruz. The architecture was so carefully planned that you do not realize how many steps you’ve taken until you look behind you and see them marching in apparent endlessness into the distance. As it is very difficult to get to, Huautla has minimal tourism. Nor is it advisable to walk the Mayan road without a guide as the area has many bandits. However if your off-road appetite for challenging areas has not vanquished, you may wish to drive out to the nearby caves and waterfalls.

The most delightful off-road is the drive between Oacaca City and San Cristobal de las Casas. The drive is largely forested until you reach the Capital City, and inhabited with one of the most unique indigenous tribes you’ll ever meet. The Chiapas Indians live in the rain belt. To alleviate the problem of constant flooding, they build their homes in the trees. They weave their own clothing, with predominance in the color pink, and hang them out on lines in hopes passers-by will buy them.

To view this tribe, you’ll need to take the off-road that connects Oaxaca City with the town of Juchitan. It is partially paved, primarily gravel, with very soft shoulders. If you slide into a ditch, which can happen easily, as rains occur nearly every day of the year, do not expect the inhabitants to help you. They will bring out their lawn chairs and watch the spectacle, while vendors selling tortillas and soda pop. If you can’t get out on your own, you’ll have to wait for the next vehicle to come along, which could take as long as an hour or two.

San Cristobol de las Casas sits directly on the border between Guatemala and Mexico. The elevation is extremely high, so even in the summer it gets chilly. You’ll need very warm clothing for a visit, but the town is exceptionally friendly. If you are tired of living out of your Jeep, take advantage of the many hostels that offer cheap rooms and good companionship. It is one of the best places in Mexico to purchase hand-crafts, rivaling even Oaxaca City.

Guatemala has one of the highest crime rates in Latin America. It also has some of the worst roads, due primarily to climatic conditions and natural disasters. Like Southern Mexico, its roads are narrow, winding, and climb through high mountainous areas. Recent earthquakes and flooding have decimated many of them.

Despite the high crime rate, most visitors report safe trips. The most exciting off-road is a thirty mile drive from the ruins of Tikal to the newly discovered ruins of El Zotz. This extremely narrow path is a dirt road that is usually seeped in up to eight inches of mud, through intense jungle. At times, you may have to hack down trees that have fallen into the path, but the experience is truly amazing. Howler monkeys chatter from the trees, and brightly colored birds flash through the sky. Tikal and the surrounding area are very friendly, but precautions should still be taken in the evening to guard against thieves. 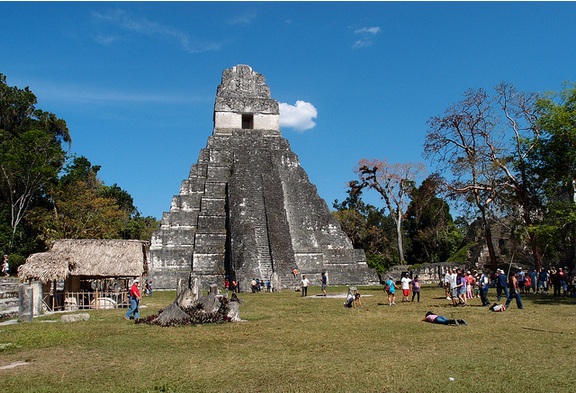 Honduras has two thousand miles of more or less paved roads, but the vast majority of them are narrow dirt roads. Like Guatemala, Honduras is primarily a mountainous region, but with the added boon of spectacular, unspoiled beaches. Since most of the roads are off-road trails, it’s a pick and choose variety, usually involved in narrow, rough roads snaking around the sides of mountains. They are deeply rutted, and often involve having to dig your way out of a ditch. You often need to exercise a lot of patience, as the off roads are used by farmers driving their livestock, by ox-drawn carts and casual pedestrians. If you go to the beach, prepare yourself for a little mud bogging. The Honduran people are friendly, and there have been few incidents reported of crime against tourists, but it is a country that is sparked with sporadic upheavals in its political affairs.

Wherever you go in Central America, keep close watch on your belongings. When traveling by Jeep, it’s best to travel as a group. In places like El Salvador, Belize and Guatemala, visitors have reported theft even while sleeping in their vehicles. Whenever you can, check into a hotel that has a garage for protection of your vehicle. Do not leave your Jeep unattended for an extended period of time. Try to find a trust worthy guide to lead you if you are taking an off-road into a village. Learn to speak Spanish as it will open more doors and gain more respect among the citizens. Keep in mind that you are in a foreign country and the rules that you live by do not necessarily apply in Latin America.