My Aunt Randy recently went on a trip to Athens, Greece. She’s pretty cool (she even has a Wikipedia)! so I asked her if she would write something up for The World or Bust on what her perceptions of the city in the midst of their overwhelming economic crisis were.  She is an economist and has written numerous books about gender and income inequality so I thought she might be just the person to provide me with a little contenido.  Enjoy!  ~Jeremy 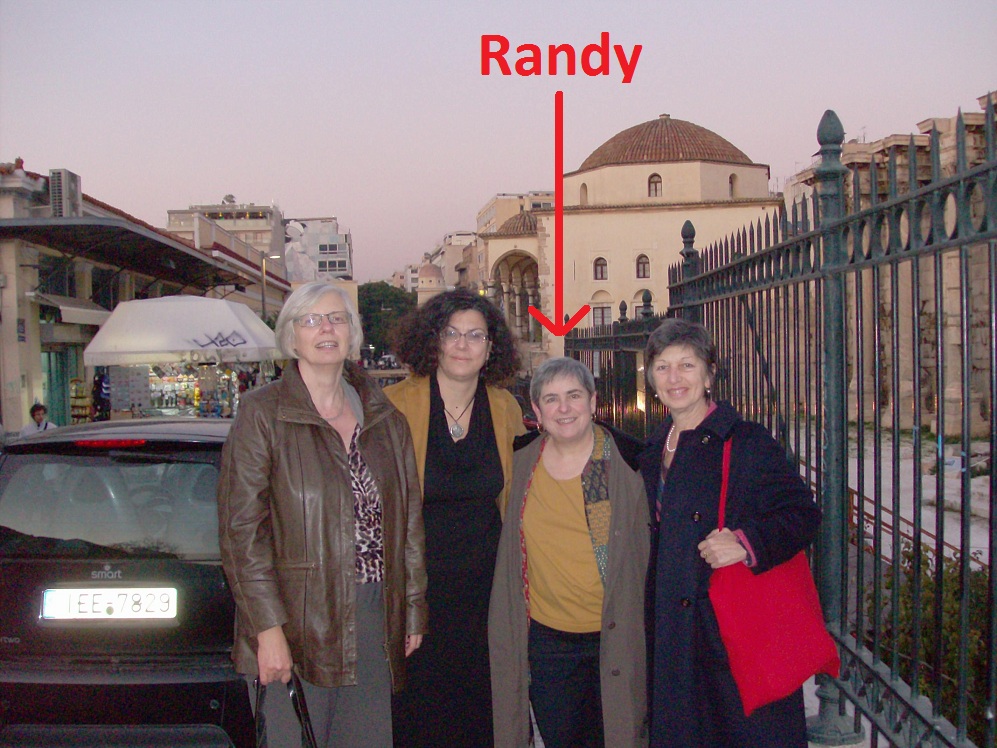 I recently visited Athens, Greece.  One way I get to see the world is through professional conferences I attend or talks I am invited to give.  That’s how I got to Athens.  I was invited to give a paper at the  international symposia,  Women, Gender Equality and Recession.  I love traveling this way, not for the work, but for the company.  I get to meet new people from all over the world that are interested in the same things I am and have interesting political insights.  Also, there are usually some gracious hosts who not only have great pointers about where to visit and eat, but also let you know a great deal more about “native” culture and life.

I was very excited but also felt a bit of trepidation about visiting Athens.    After all, even the usually insular US news has been full of bad news from Greece.  Their sovereign debt crisis has put them front and center in the Eurozone and world economic crisis. Austerity programs and the imposition of technocrats to run the country has exacerbated the economic squeeze and generated enormous political turmoil and questions about sovereignty.  The Greek people are responding with lots of protests, strikes and riots.  So, I was not sure what to expect.

When I arrived at the airport, I found my way to the bus that was to take me to Syntagma Square (site of the “p”s – parliament and protests) close to where I was staying.  I wanted to get a look at the countryside.  The hour long bus ride took us through various interesting neighborhoods.  I was reminded of Buenos Aires; a modern city that needed a good scrubbing.  Lots of crumbling sidewalks, some closed buildings.  But life was certainly carrying on.

The symposium brought together European feminist economists and sociologists to discuss the impact of the recent/current recession on women.  I won’t bore you all with the details, but I was astounded by the similarities across countries.  The discussions I had and the papers presented painted a very clear and distressing picture.  But there were two things that made me fearful. First, it was very clear from the presenters from the southern Europeans that there is a good deal of resentment toward France and Germany and the “Troika” (The European Commission, the European Central Bank, and the Internationally Monetary Fund) for imposing not only austerity measures but also imposing technocrats to run Italy and Greece.  This is an old and disturbing rivalry.  The second concern comes from knowing there are lots of recent “migrants” (we call them immigrants) in many of these countries, many of whom are unemployed.  It is easy to see that they may soon become scapegoats.  The mixture of national anger and ethnic scapegoats can’t be a good mixture.

Despite all the horror stories I had heard before I came to visit and the hardships I heard about when there, I was struck but the ability of people to just carry on.  Everyone I encountered was going about their business, as we do here every day.  Friday night Athens was lively with lots of people out and about.  Still, things are not easy.  Many shops were closed and several times I was approached by someone (always younger men) begging for money.  I was told by my Greek hosts that much of the ever-present graffiti often include anarchist slogans.  Every restaurant we went to, we were practically the only ones eating there.

One final thought.   Many people asked me about Occupy Wall Street.  They weren’t aware that the Occupy Movements had spread all over the US.  I was proud to tell them about them, especially Occupy Boston.  When I explained who was there and why, I realized one really big difference between Europe and the US.  The 20 and 30 somethings that are protesting at the Occupy sites are not just there because they didn’t have jobs (or lousy ones), but because they had enormous student debt.   My European counterparts reminded me that while unemployment among that same age group is very high in most Europe countries (and they are also leading the protests), there is no student debt.  Public higher education is free in most of Europe.  Another good lesson.

To wrap up, I had a great time.  The Greek people are hearty, opinionated and down to earth.  My kind of people (actually they are – or at least close, being the daughter of Bulgarians)! I loved learning more about what was going on in the Eurozone and loved seeing and being in the city. I always felt safe.  The food and famous sites were fabulous.  The taxis are cheap and there is lots of good public transportation.  If you are wondering if you should go, I would say:   Opa!

Has anyone else been to Greece recently?  What was your perception the country?