Miami is a new city.  With virtually nothing  older than a 100 years, the rather impressive skyline is punctuated by soaring glass skyscrapers that exude a modern and fast-paced ambiance.  But before all the glitz and glam which The Magic City has become known for, Miami was the end of the line, literally.

Miami’s first boom came after one of the city’s forefathers, Henry Flagler, extended the Florida East Coast Railway to Biscayne Bay from West Palm Beach.  West Palm was hit by two consecutive freezes that ruined crops and Flagler caught wind that Miami was just far enough south to not have been effected, and by 1896, the train tooted into Miami. Within 100 years, the area became one of the largest and most diverse metropolises in the US.

The history of Miami actually dates back thousands of years when the Tequesta Indians first inhabitated the area where the Miami River meets Biscayne Bay.  There is a preserved archaeological site where they camped called the Miami Circle that still exists.  The Spanish arrived in the 1500’s and set up a mission, but they soon left to conquer other places and the area was virtually uninhabited for hundreds of years.   A few settlers began to trickle back in during the early 1800’s and then the Seminole Wars broke out which left the area pretty desolate.

Miami really boomed after the railroad was connected, and downtown Miami began to take shape as a real city instead of just an isolated outpost town.

Not many buildings are left from the original urbanization of downtown, but a few still are still visible and I went on a little adventure to discover them.  Most people have not seen the historic buildings of Miami because they are located in rather dodgy areas and most probably have no reason to be there (unless you’re buying weed or picking up prostitutes).  I don’t think riding through on a scooter helped my cause much, but I wanted to see the old Miami easily without having to park too long, so that’s what I did.  Check out some of the historic buildings I discovered.

The Freedom Tower is one of Miami’s most iconic buildings.  It was once the headquarters for the Miami News (newspaper) but it became the welcome and registry point for Cuban exiles in the 60’s, hence its name being changed to The Freedom Tower.  It’s modeled after the Giralda Tower in Seville, Spain.  The Freedom Tower is located at 600 Biscayne Boulevard, Miami FL 33132.

Chaille Block is a preserved street of buildings from the early 1910’s, some of the oldest buildings in Miami and an example of what early commercial architecture in the area looked like.  Chaille Block is located at N Miami Ave and NE 5th St, Miami FL 33132.

Here is a picture of both Gesu Church and the Security Building (the Capital Building) with the modern Miami skyline and in the background.

Here is a close up of the Gesu Church (I wanted to go in but there was mass).  It was the first Roman Catholic Church in Miami and the original church dates back to the 1800’s, but the building you see here is from the 1920’s and was expanded to accommodate the huge influx of people into South Florida during that time period.  Gesu Church is located at 118 Northeast 2nd Street, Miami, FL 33132.

This is a plaque outside Gesu Church giving a brief history of the first Spanish settlement in Miami in the 1500’s, it’s not around anymore but pretty cool to think they were here that long ago. 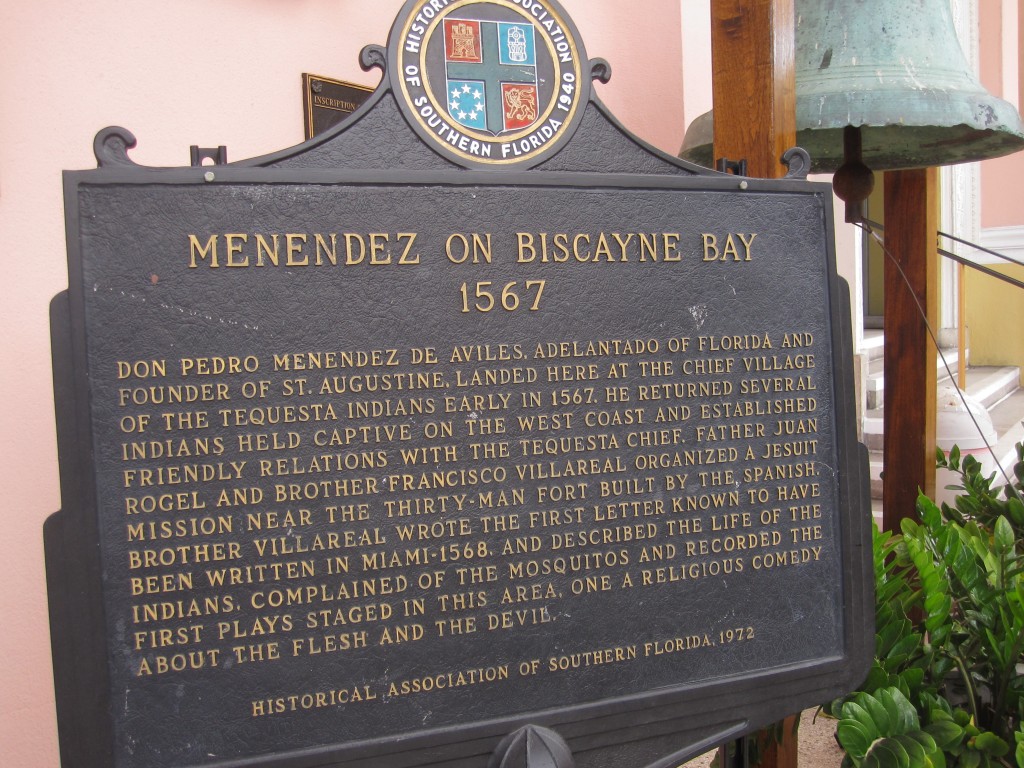 The Olympia Theater and Office Building is one of Miami’s most prized landmarks.  It is literally located in the epicenter of downtown and was a mixed-use building that housed the famous Olympia Theater which originally showed silent movies and wowed its visitors with ornate Moorish design and even there was even a simulated sky above the seats with clouds and twinkling stars. The Olympia Theater was also the first air conditioned building in Miami as well.

The Miami-Dade County Courthouse is one of the most iconic buildings in downtown Miami even today.  It was the tallest building for many years and completed in 1928 and was actually built around the old city hall which was later disassembled.

The Miami Beach Main Post Office isn’t downtown, but I included it with this post because they have a very beautiful mural inside that depicts the native American struggle for survival through many centuries of hardship.  In the left panel you see the Spanish conquistadors arriving, then fighting between the two, and then finally, US soldiers come into the picture during the Seminole Wars.  The post office is quite an impressive building as well and a great example of New Deal Art Deco architecture as well.  The Miami Beach Main Post Office is located at 1300 Washington Avenue Miami Beach, FL 33119-9998.

Do you know about any other cool historical buildings in Miami?