Wanna rub elbows with extraterrestrials? Then maybe take a “UFO themed vacation” by visiting a few hotspots around the world where mysterious sightings are frequent! E.T., Chewbacca and the artist formally known as Prince, oh my! 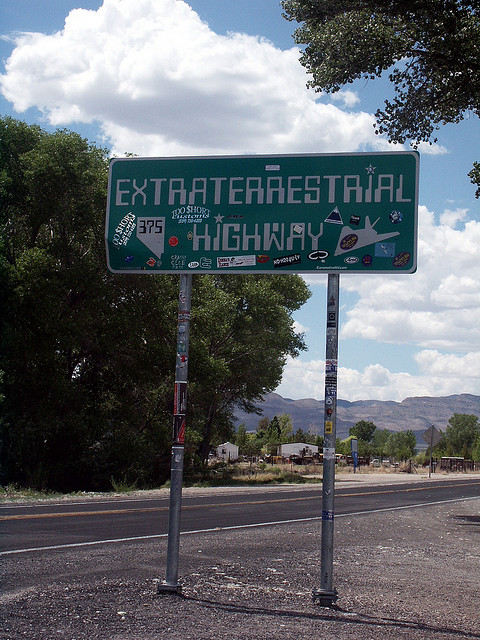 Not only does this Caribbean island at the southern apex of the Bermuda Triangle have conventional UFOs buzzing around, they even have USOs, or Unidentified Submersible Objects, that dive into the ocean! Most of the documented sightings are reported in and around the El Yunque Rainforest which also is home to the mysterious chupacabra, an elusive and enigmatic creature first sighted here. Stories of abductions in this rainforest abound — fascinating tales of missing time and personal encounters with beings not of this world. Puerto Rico is also the home of the Arecibo Observatory that’s used as a research base for all things astronomical, including the Search for Extra Terrestrial Intelligence (SETI) as portrayed in the movie “Contact.”

Just outside of US cities like Las Vegas and Reno is one of the US Military’s biggest secret bases known as Area 51 where UFO sightings are so common many wonder if they’re seeing ultra-sophisticated human technology that’s kept hidden from the public! Regardless, the entire Groom Lake area has become a hunting ground for UFOlogist, even though the bases and air space above them are very, very restricted…the warning signs on the gates even threaten arrest for taking pictures! So, those in search of a safe place to view the aerial phenomenon congregate at the Black Mailbox (now painted white) made famous by the controversial scientist Bob Lazar who claims to have worked on alien technology at these facilities. Another favorite stop is the tiny town of Rachel where they’ve embraced their extraterrestrial connection with cute establishments like the Little A’Le’Inn (pronounced “Little Alien”) and great photo ops like the “Extraterrestrial Highway” sign on State Route 375 that proclaims “Speed Limit Warp 7!”

You’ll have no doubt you’ve reached the self-proclaimed UFO Capital of Australia when you drive into the remote Northern Territory village of Wycliffe Well. Signs on either end of town proclaim that you are now in the right place to see a UFO…in fact, their brochure states that “UFO sightings are so common, that if you stayed up all night looking, you would be considered unlucky not to see anything, rather than lucky to see something.” Colorful statues of the native aliens adorn the entrance to the local roadhouse (which, FYI, boasts an impressive beer selection) and the walls are plastered with newspaper clippings about local UFO sightings. Outfitters can be arranged for night time forays to nearby Karlu Karlu (also known as the Devil’s Marble Conservation Reserve) to observe the persistent UFO activity that has been documented since World War II.

If you’re looking for the UFO capital of the world, the small Scottish town of Bonnybridge outside Edinburgh says it fits the bill. As the most active point on the “Falkirk Triangle” (with the other two points formed at Stirling and Fife), the locals claim at least half of them have witnessed fantastic displays of colored lights that form into circles, triangles and cigar-shaped objects. With over 300 yearly sightings the theories are thick; some historians propose this town is the hiding place of  the Stone of Destiny which might attract them while the writer of Beyond the Falkirk Triangle speculates that the town is itself is a portal to another dimension that opens briefly to provide glimpses of other worlds.

Ever spotted a UFO somewhere, where at?!

The Most Beautiful Lakes in the World
Do I need to apply for an ESTA Visa?
5 Tips for a Trip to Boston