The following is a guest post from Dan Cretes, a South East Asia frequenter.

As a travel blogger, writing about the worst place you’ve ever been is not something you’re asked to do a lot. More often than not, to get paid and to keep moving onward, you have to be nice about the destinations you encounter. Even when they’re less than ideal.

So readers of The World or Bust, I gather you’ve come here to get your fill of positive travel babble right? Well screw that. What I’m about to do is going to bring a whole new meaning to the word “positive”. Ready to watch me tear a hole in what I consider to be the worst place I’ve ever been? Roll on up.

Here are four reasons why I’ll never – well, unless I’m accompanied by the devilishly handsome young chap that runs this travel blog of course – ever, go back to Kuta, Bali.

Most people (read: twats) come to Kuta to hit up the surf, get their sex organs some game and get intoxicated to the point of taking on the appearance of a wild, rabid, banshee. If you’re not into that shit, don’t go.

This was my first impression of Kuta. Having crossed over the stunning plains of Java and loved every minute of my Indonesian adventure, I quite fancied some time chilling out by the beach and bronzing up my pallid carcass before a return to the inevitably cold and lonely British winter. If only I’d done my research.

The beach at Kuta, albeit fawned over by the world travel press as “a great destination in Bali to learn surfing”, is in fact the biggest, filthiest, container of human waste I’ve ever clapped eyes on.

Full of macho Aussie-teens and their squeaky-voiced, cock-sucking brethren of loose girls, chilling on the beach in Kuta is more a grueling test of endurance as opposed to anything near relaxing. Couple that with the incessant harassment from the local Balinese over buying shark-tooth necklaces and other useless crap and you really will want to wade out into the sea and choke on a wave of piss-infected water. 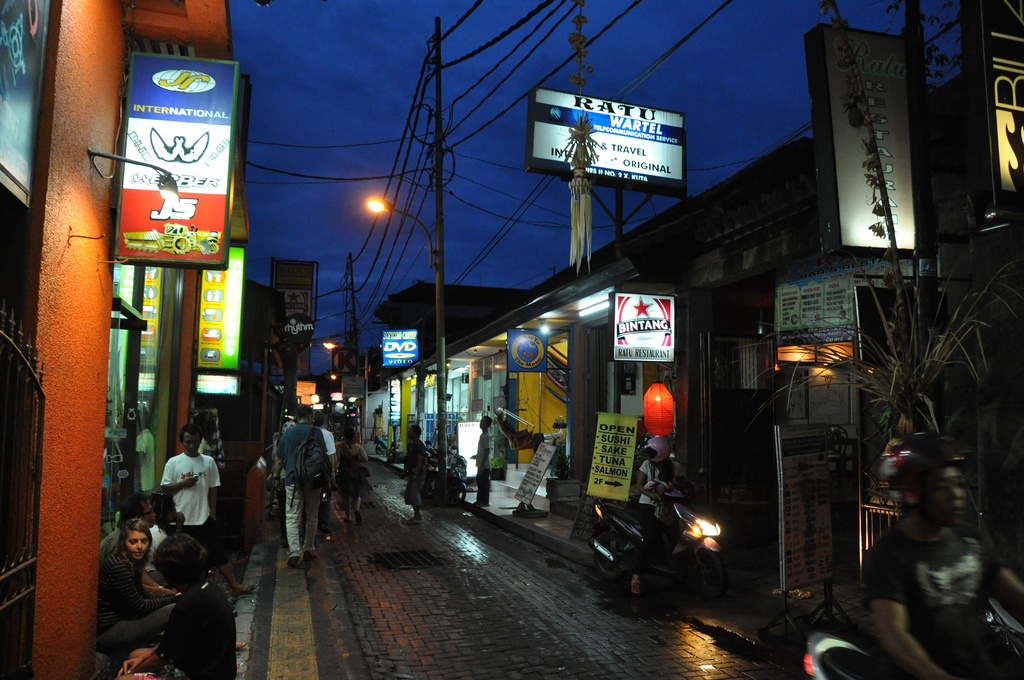 I used to not mind going out to loud bars incessant on playing Kings of Leon’s crusty hit “Sex on Fire” every now and again. That was until I went to Kuta.

If you dig watching leathery-tanned teens projectile vomit all over the floors and the shoes of patrons in a club, then by all means head out. The same goes for watching cheap little whores flash their less-than-impressive-wares at Muslim locals. Yes, the nightlife in Kuta definitely leaves a lot to be desired.

Maybe I’m just bitter because I was about two years older than everybody else. Or it could be the fact I’m as ugly as sin and couldn’t get any. I don’t know. But what I do know is that partying in Kuta is all about the breezers, broken virginity and borrowed time. If you like your bedroom partners young, loud and annoying, join the all day party.

If ever there was an award for the smallest concentrated area of horrendous hostels and accommodation options, Kuta would storm it by record-breaking margins.

So bad that I had to change hostel rooms every single night of my 3-day stay (3 days? What was I thinking…), I eventually gave up on ever considering that Kuta actually had a place to stay that had four-complete walls and a bed that didn’t snap in half the moment you lay on it.

What makes matters worse is that the workers at Kuta hostels are probably the most apathetic people on earth (can’t really blame them). Ask them for anything and they’ll look at you as if you just unzipped your trousers, pulled your flaccid member out and started jacking it Jason Russell-style. Don’t make that mistake.

The Lack of Escape

Perhaps the worst thing about Kuta is that, unlike other horrible destinations, there’s simply no escape.

It’s not like you can take a 5-minute ride out of town and gather your strength in a quiet park or museum – and no, Seminyak doesn’t count – it still smells of excrement.

Get in to Kuta and the only way you’ll get out with your mind and body untouched is to leave soon afterward. Never have I been to a place with such a glaring lack of things to do other than get absolutely smashed in the brave attempt to forget that you’re there. It’s an onslaught.

Of course, my opinions are entirely subjective. Just because I hated Kuta doesn’t mean you will. But if you do really love it, then I can probably guarantee that you and I would likely never get on. Whether this remains a good or a bad thing, on your behalf, remains to be seen. We’ll have to turn the arbitration over to Jeremy.

Rooftop Bars in Istanbul
Travel Scams to Look Out For in 15 Countries Around The World!
Medical Tourism for Backpackers