Located in the northwest of Belgium, Ghent (or Gent) is a beautiful canal-laced city that is often overlooked on most people’s Belgium itinerary who often opt to blow through it via train from Brussels to Bruges.

While my mom vehemently suggested I go to Bruges (I had only 1 extra day to spare after Brussels), I decided to give the “ugly” sister a chance, and I’m so glad I did… While Bruges might be the world-renowned UNESCO beauty, Ghent is most certainly no DUFF.

Thanks to Belgium’s extremely easy-to-navigate and frequent trains, I just showed up at the central train station after my 2 days in Brussels, bought my ticket for 8 Euro, and within 10 minutes was on a train heading to ole’ Ghenty with a trip duration of  a mere 35 minutes!

Located in the Flemish region of Belgium, the people of Ghent speak, you guessed it, Flemish! Almost everyone speaks some English as it’s a pretty small city and still very touristic, but I did encounter numerous restaurants in the center of town with no English menu which I thought was pretty odd, or maybe a statement?

If you’re taking the train to Ghent from Brussels, you will end up at “Gent Sent-Pieters” station which is a couple km outside of the city center. Don’t do like I did and take the tram that says it goes to the center, but only after it loops around the entire city first. Take Tram 1! The pick up location is just to the left about 150 feet (50 M) once you walk out of the train station on the other side of the bus depot.

While riding into town on the tram, I couldn’t help but notice that Ghent seemed much more, how do I put this, plebeian, in comparison to the capital. But, after we traveled a bit more and got closer to the center, I noticed the architecture start to become more extravagant, canals started popping up everywhere, and then finally, when we made it to the end of the line (well where I was getting off), the city opened up to an immaculately maintained historic center. 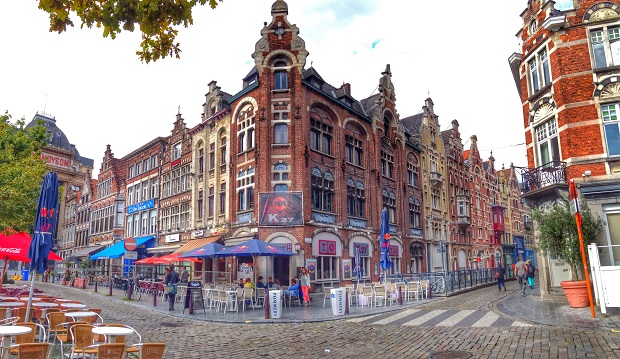 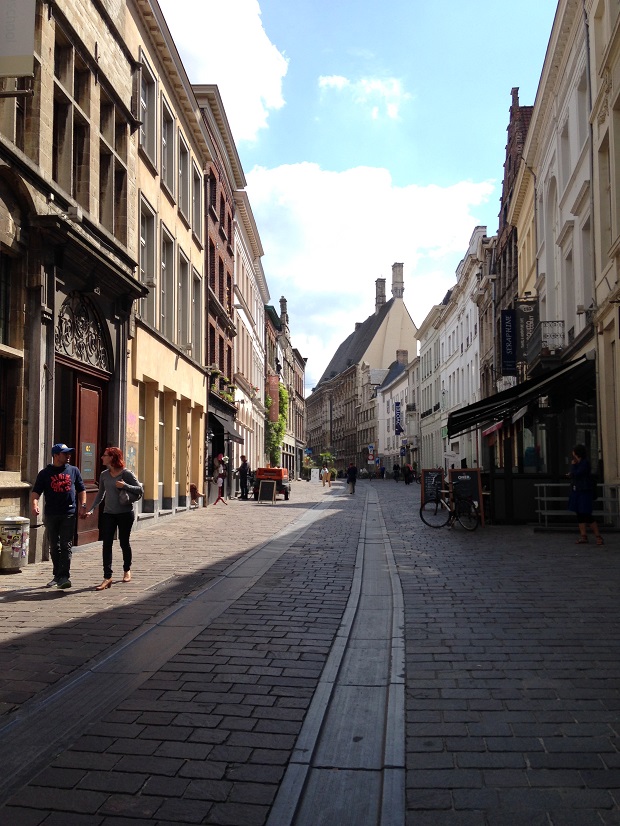 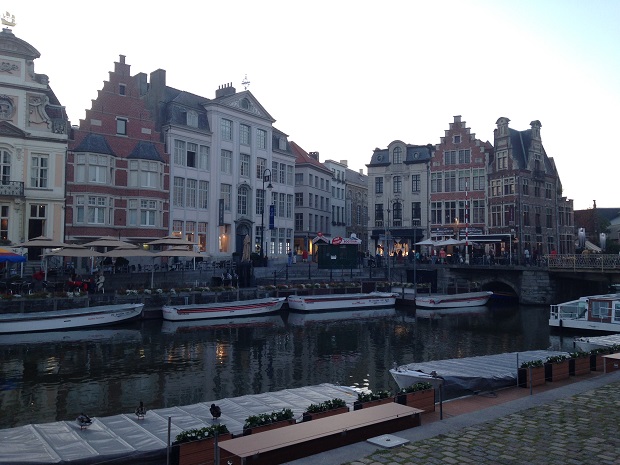 I dropped my bags off at my hotel and set out to enjoy the one day I had in the city. The Tourism Board of Ghent hooked me up with a pass to see some of the attractions and they gave me some very well done maps and quick guides (you can pick them up at the tourist info center in the heart of the city for free as well).

There are plenty of museums and things to do to spend a few days, but your best bet is going to be to just walk around and admire the amazing architecture and pop into stuff as you pass it. I started at Gravensteen Castle, one of the best preserved castles from the Middle Ages in all of Europe. 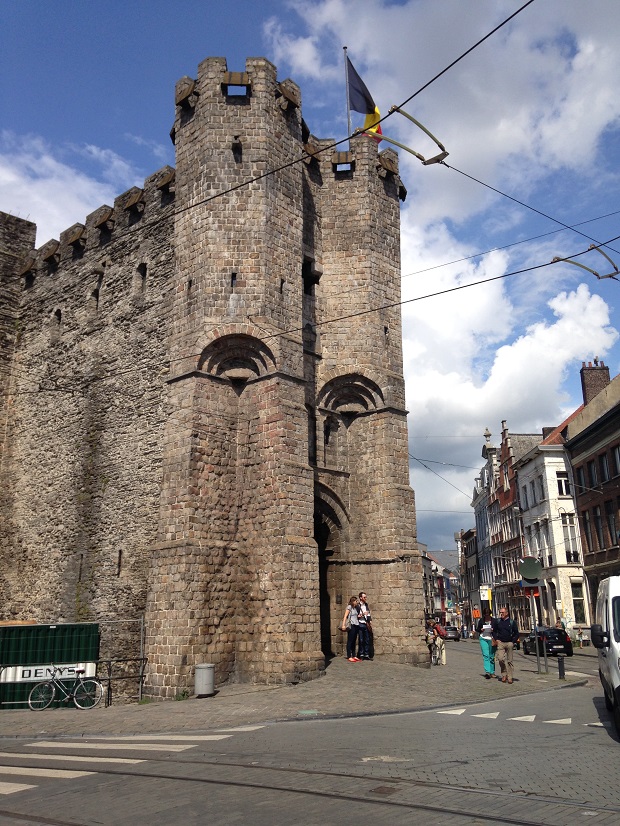 Its location right in the heart of the city makes it unique as well. You can enjoy fantastic panoramic views from the top as well as some cool exhibits in the interior rooms on armor, torture, etc., you know, the sick stuff people did all day back then like make swords and stick spikes up people’s butts. We don’t say, “I’m going to get Medieval on your ass!” for no reason!

I enjoyed the torture exhibit most. Check out a couple of these old torture methods/devices…I sure as hell would have converted to whatever religion they wanted me to if I could have avoided the Scrotum Splitter of DOOM! 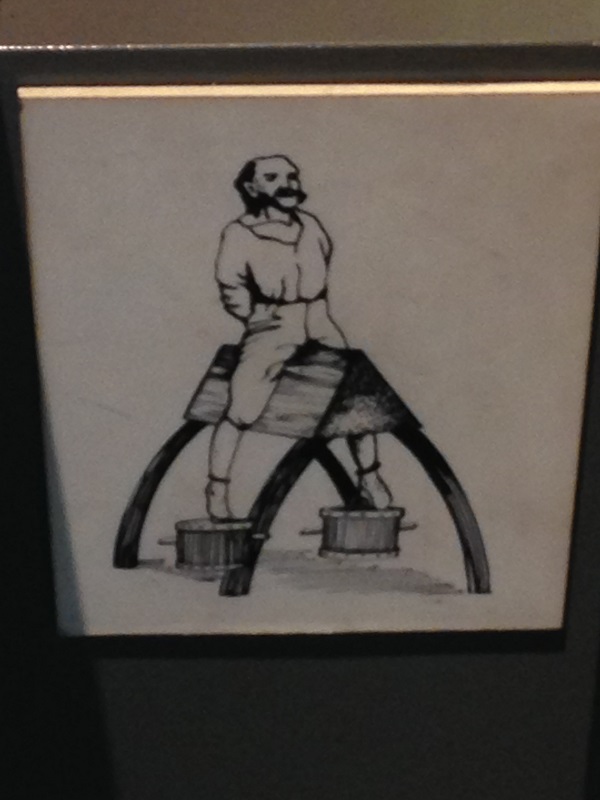 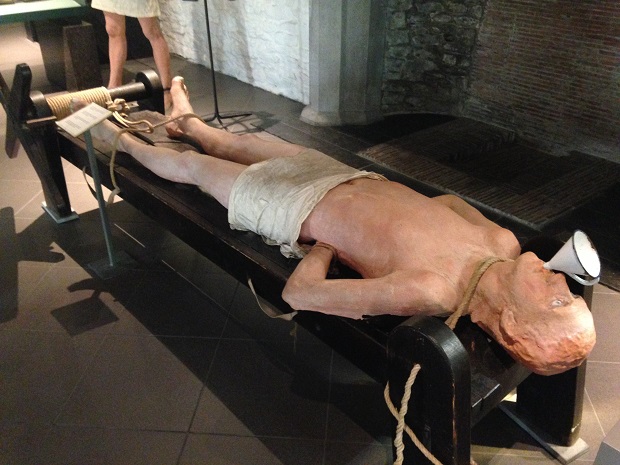 Probably the best photo you can get of Ghent is on St. Michael’s Bridge where you will see all 3 Medieval towers in one shot, St. Nicholas’ Church, the UNESCO recognized Belfry (suck it Bruges!) and St. Bavo’s Cathedral (whose facade is being redone at the moment). 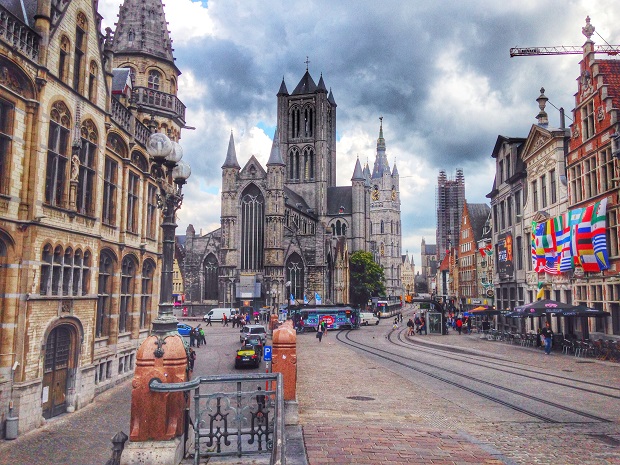 Head up the Belfry tower for spectacular 360 degree panoramic views of Ghent from the epicenter. There is even an elevator and you can stop on different floors on the way up and check out the massive bell and an large antique music box that still plays. 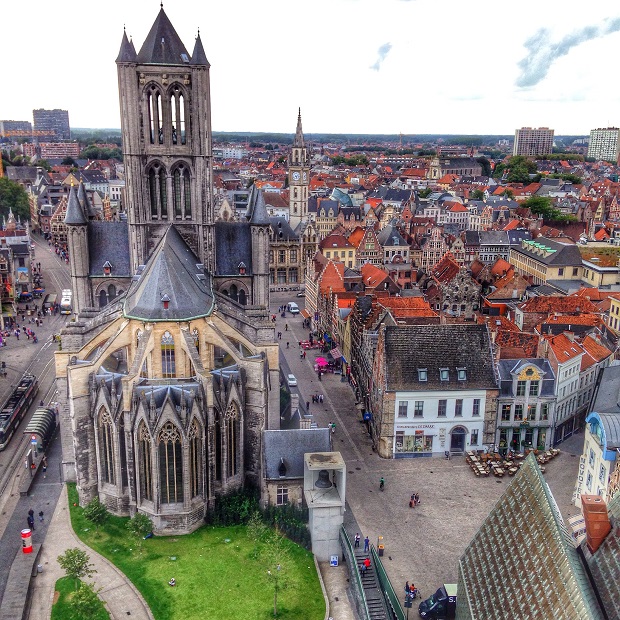 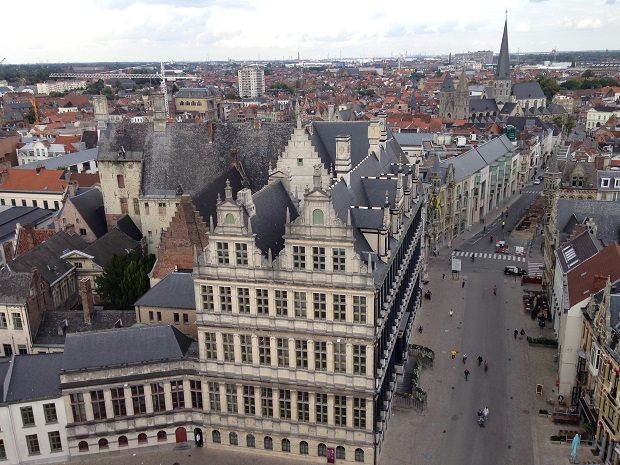 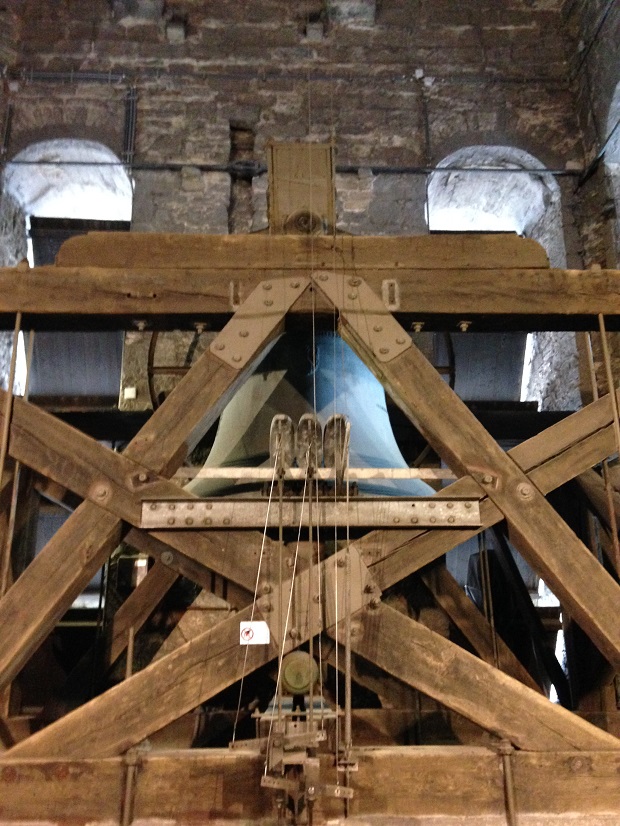 While a bit churched out, I still headed to St Bavo’s Cathedral. The lofted interior really is impressive and if you’re lucky enough to catch the organ being played, it’s quite an experience in such a venue. But, St Bavo’s is famous for more than just its ornate interior. It’s also the resting place of the Renaissance masterpiece, The Adoration of The Mystic Lamb by the Van Eyck Brothers. Pieces have been stolen from it over the years and 1 or 2 panels are being restored, but I have to stay, it is quite an impressive piece of artwork. 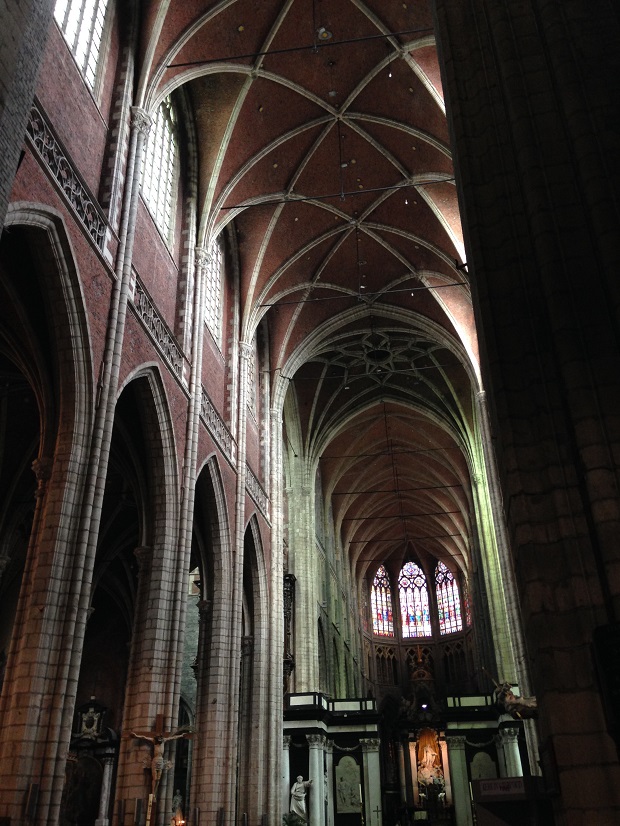 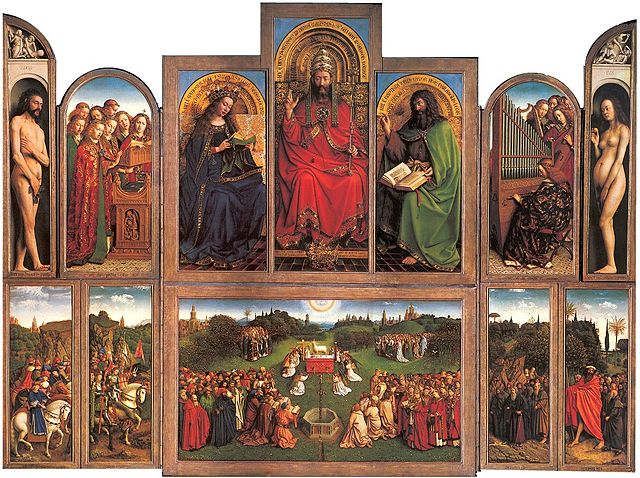 While not high art, a couple blocks away from the main cathedral is “Graffiti Alley“, which it is actually completely ok to tag, paint, w/e you want to do to the walls –  anything goes! Just don’t expect it to be not covered up by someone else within a day or two. 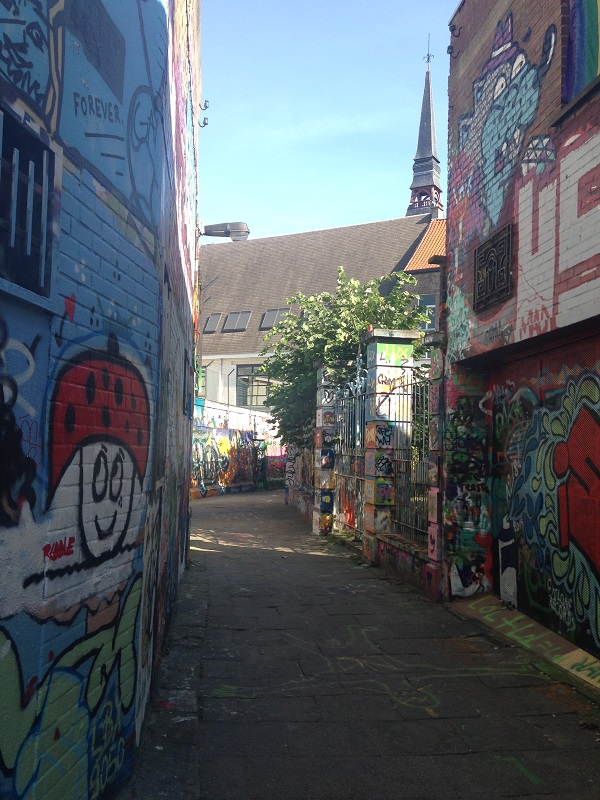 In the evening, take a canal boat ride which only costs around 6 Euro. They last 45-50 minutes and you get to see the city from a different perspective. In the late afternoon light, the buildings take on a new sultry character. It was so romantic I even tried to kiss myself… 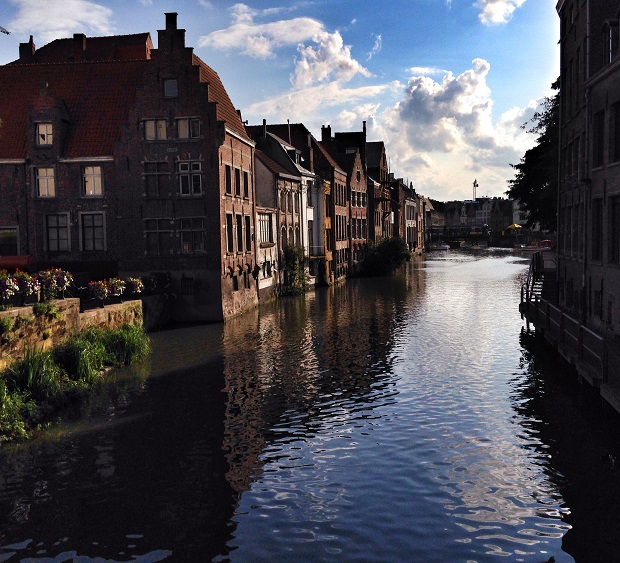 Stroll around and choose a place to eat for dinner that looks good (good rule of thumb is that if there are people there, it’s probably decent!). One place I ate that was solid and had a really cool vibe was a place called Mosquito Coast (Hoogpoort 28). While not Belgian, the food was good and they had unique items like Kangaroo burgers, yum! Most people opt for Mussels (don’t know if they have them here) as this is one of the “delicacies” of Belgium and they do look/smell good.

After your belly is filled and your hunger satiated, you have to head to one more place before you can consider calling it quits, Dreupelkot.

Ghent is famous for micro bars, but this place, while most definitely miniscule, is renowned for two things. The jovial and plump owner Pol (who Santa Claus would be if he decided to start drinking instead of delivering presents) and the melange of Jenever options. What the hell is Jenver you ask? No, it’s not me slurring my words about the girl I met last night, it’s a juniper-flavored alcohol and the national drink of both Belgium and The Netherlands. Pol is the king of Jenever and has created multiple flavors that you can sample all for 3 Euro a shot (you sip them). He even has his own brand (see the bottle below).

You can try mango, cran-apple, apricot, walnut, fig, blackthorn?, tiramisu, and about 25 other flavors. I opted for the traditional one which was very nice, as well as a cran-apple which just tasted like a vodka mixed with juice (try the original).

Pol runs the place himself unless it’s a weekend when he has one other person helping out. He is happy to talk to you about anything, just don’t distract him when he’s recording his sales, i.e. scratching out tallies on a piece of paper (it was full). The crowd is a mix of both locals and tourists, but everyone is happy to chit chat so don’t miss this place, you’ll have a good time. 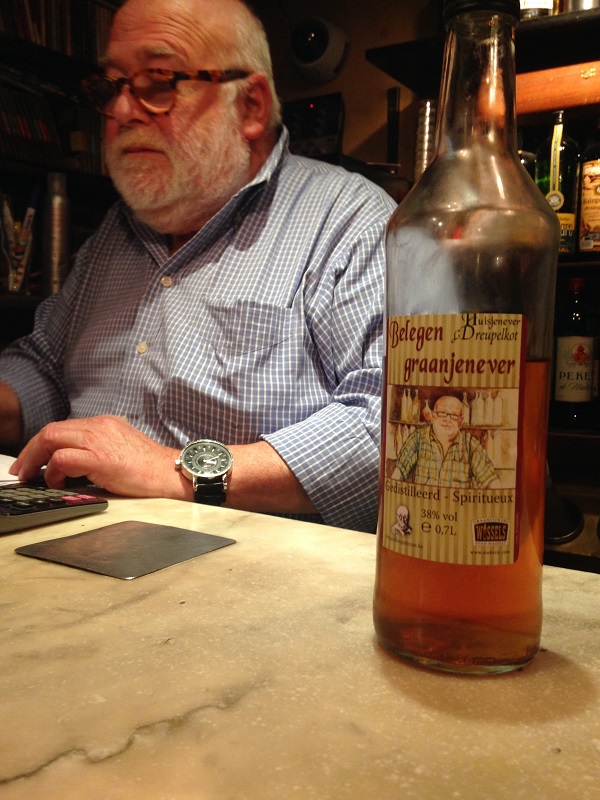 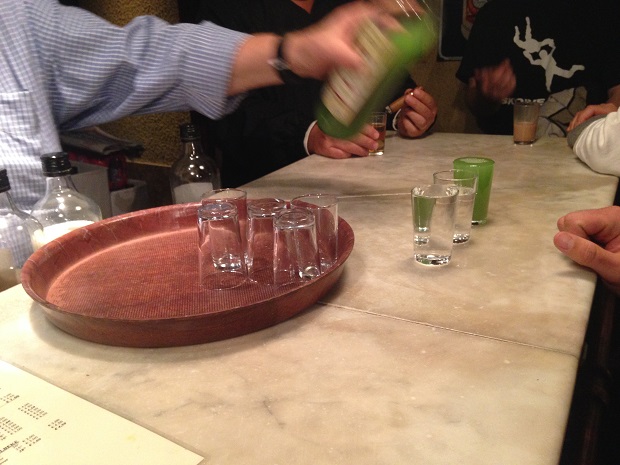 I spent my one night in Ghent at the NH Gent Belfort Hotel which graciously offered to let me stay to explore the city. It’s located right in the heart of the historic center and across the street from an amazing medieval building which now serves as town hall. The awesome Hotel Director, Jurgen, even personally showed me around the hotel, took me for a beer at one of his favorite local bars (at 2 PM) and for a quick walk around the city (he’s the one who told me about Dreupelkot!) Talk about service.

The hotel seems pretty modern at first glance in the lobby, but it’s actually built upon the medieval foundations of another building which now serves as an event space that you can have your corporate meeting or bar mitzvah in. 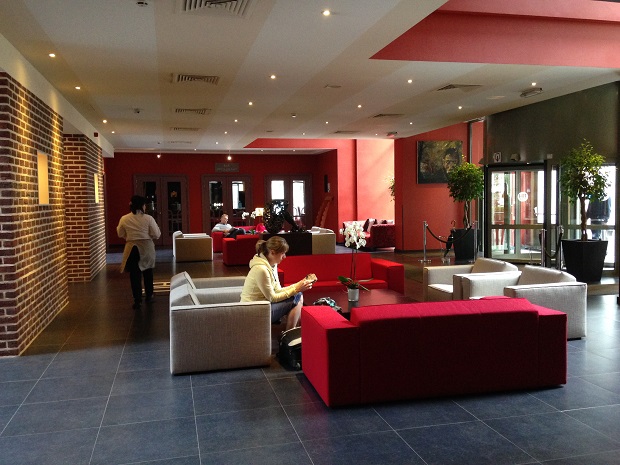 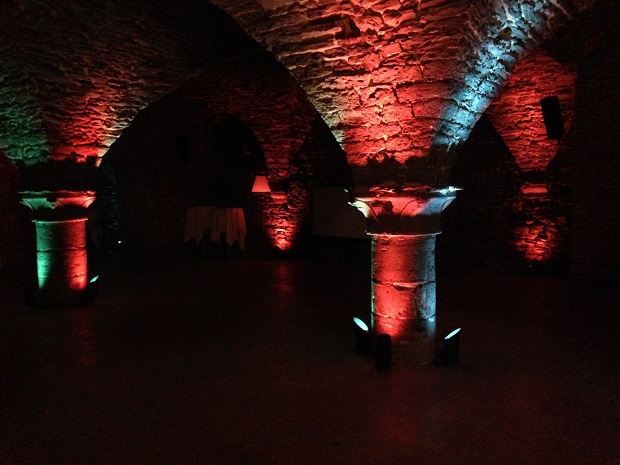 Here is the view outside my window: 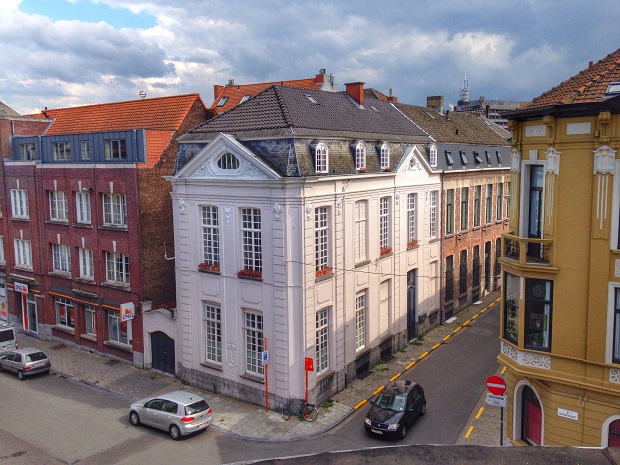 As you can see, Ghent is pretty cool and definitely deserves a day or two on your Belgium itinerary. While I basically only had one day in ghent, It’s so easy to get to, there’s definitely no excuse for at least not popping in for the day even if you don’t spend the night!

Best Places to Surf in The Philippines - Siargao!
Mouthwatering Dish Choices When Cooking With Venison
Feed Your Emotions With These Soul Food Classics