The following is a guest post from Emily Buchanan about how we all try and travel outside of our own borders, but never stop to experience and appreciate our mother lands.

As a proud British gal and a steadfast traveller, there are a number of things I’ll always love about my home country. They are as follows:

People love nothing more than to moan about where they were raised. We all seem so engaged with this contemporary itch to explore that we fail to appreciate the wonder of our own backyard. I think it’s a shame. In fact, I’d really like to read posts from other travel bloggers describing their hometown. Perhaps it would help me understand them better? Who knows, but there’s so much information about the places we’ve been to, I think it’s about time we wrote about where we’re from.

Although, saying that, there are some things I really don’t like about living in the UK. Namely, the weather (it’s rained constantly and indefinitely for what feels like a year) and the politics. But hey ho, I try to ignore the soggy, grey wasteland in my heart where sunshine and utopia should be and instead focus on the things that make Britain great. I know I sound like a lousy, government funded advertising campaign but I think we’d all be happier with our lot in life if we started tallying up our underappreciated privileges.

So, whilst I was doing just that, I made a shameful personal discovery, one that will strip me of my claim to Britishness and make me a laughing stock in the place I call home. Whilst I’ve travelled all over Europe and indeed the world, I’ve never been ‘up north,’ until very recently. Those who know the UK well enough will appreciate the gravity of this revelation. It means I’ve not visited 75% of my own country! How terrible is that? What does that say about my understanding of the British Isles? I mean, I can’t itch to leave a country I’ve never seen, can I? Just as this handy infographic illustrates, I’ve got a lot of travelling to do on my own turf (the X’s mark the places I have been to. The red circled area is Yorkshire, naturally). 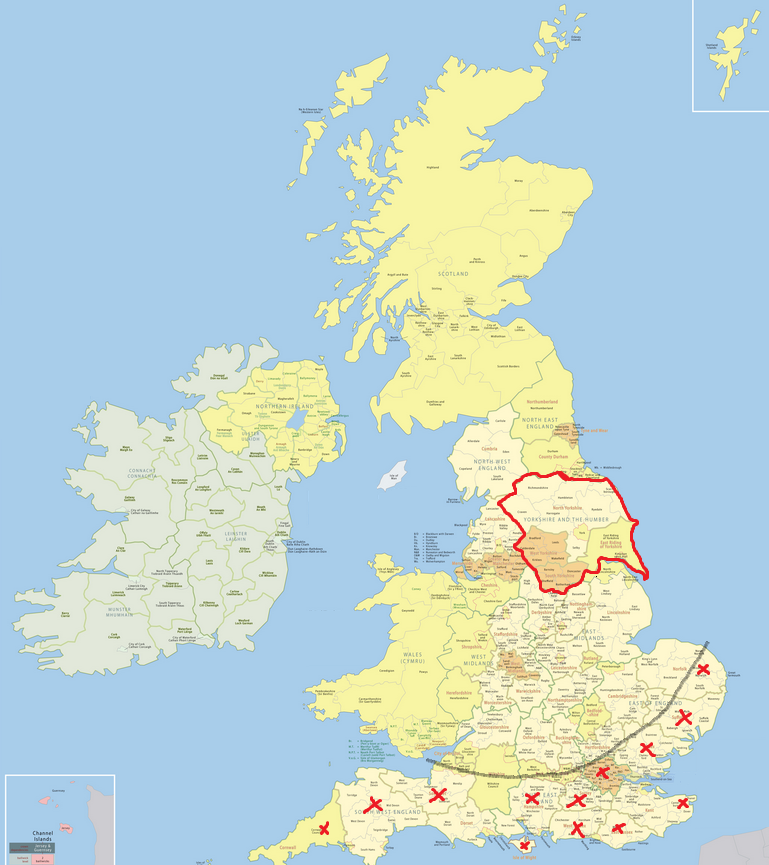 The only way to get over this bitter pill was to remedy it right away, of course, which is where Yorkshire comes in. As the biggest county in the UK, Yorkshire resides in a prime northern spot between Scotland and the Midlands. It’s diverse and characterised by rural beauty and typical northern charm. Plus, Yorkshire is saturated in history (the War of the Roses, anyone?) and therefore peppered with castles (eight in total) and ruined abbeys (five). Not to mention 620 square miles of untouched parkland (the famous Yorkshire Dales) and a glorious network of snug countryside hamlets. It sounded like my ideal getaway. And getaway I did.

Fondly known as ‘God’s Own Country,’ Yorkshire surprised me in ways I couldn’t have predicted. For a start, it really is beautiful, even in the summer rains (I went during the wet June just gone). Comprising countryside and coast, history and modernity, industry and agriculture, Yorkshire manages to summarise Britain in its many states of transformation whilst always remaining authentic.  Resting for lunch at the top of Pen y Ghent (one of Yorkshire’s three peaks) I realized that it could easily have been 1524, so unchanged was the landscape, and yet when I went to Leeds, I was in the heart of a cosmopolitan metropolis. I soon found out that this kind of dichotomy typifies a trip to Yorkshire.

I stayed in a Whitby holiday cottage with my boyfriend so that I could be near Whitby Abbey (recently voted the UK’s most romantic ruin, no less). Happily, the accommodation was much cheaper than anywhere else I’ve stayed in the UK (which isn’t saying much, evidently) and I was really impressed by the delightful little properties available through Yorkshire Holiday Cottages. If you’re a sucker for thatched roofs, exposed beams (and romantic ruins) check this company out. I prefer a self-catered cottage over a hotel any day. Then again, I also prefer to live inside the rose-tinted movie of mind, as opposed to the real world. 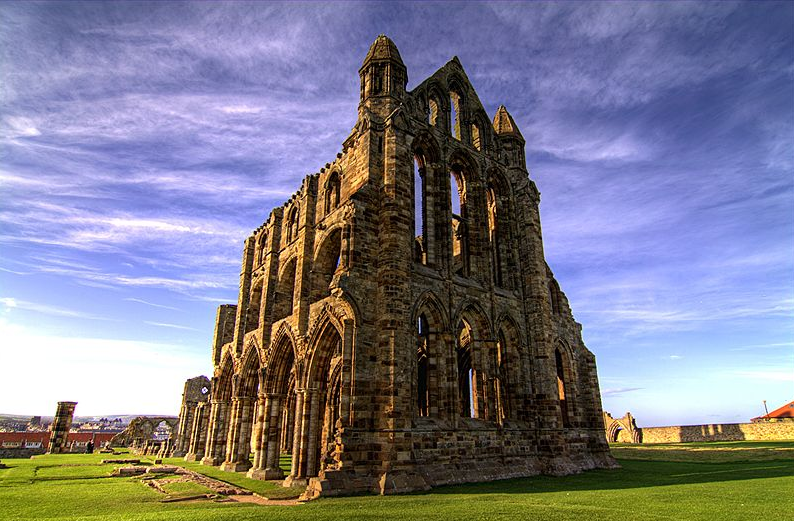 As for my highlights of the week-long trip, I can’t speak more highly of the area as a whole. There’s something I find extremely cleansing about being in the middle of the uninterrupted countryside, away from Wi-Fi connections and Facebook updates.  (“Emily Buchanan has just checked into the countryside”).  It draws all of these modern toxins out of my brain and leaves it feeling all spongy and clean.

It’s the sort of feeling I get from travelling and I never thought I could achieve that kind of wanderlust therapy from Britain, let alone up north! It just goes to show how marvellous and mysterious my fair island is. Therefore, I compel you, whoever you may be, to explore your home country and discover its surprises; it might make you wonder why you ever left.

When The Brits Ruled The World!
Top 5 Luxury Formula One Destinations!
How to maximize time on a trip