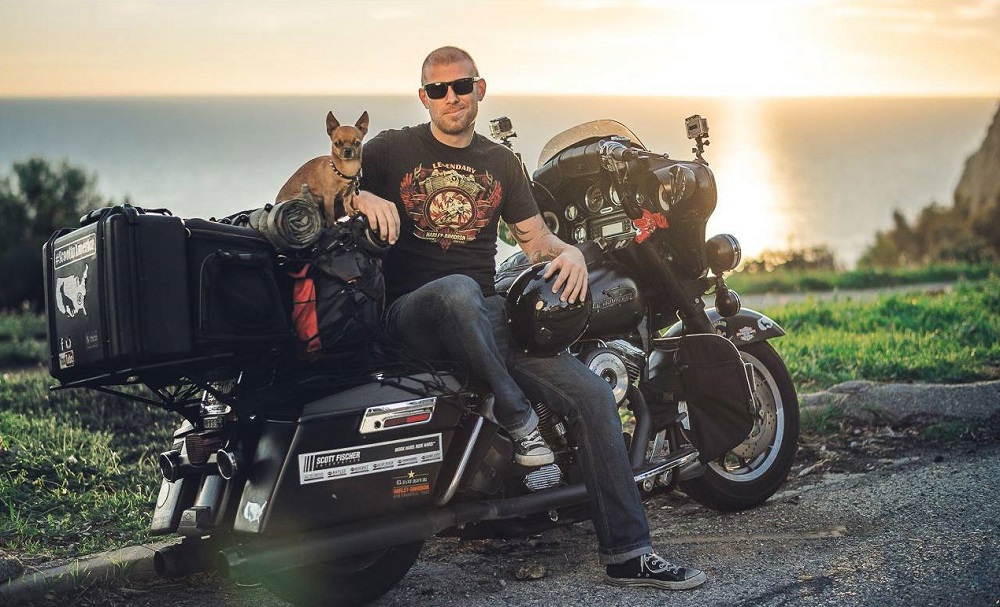 A Q&A WITH ADAM SANDOVAL of ScootinAmerica

Harley-Davidson believes strongly that every American should be able to experience the unparalleled freedom of motorcycle riding, especially those who risk their lives to protect our freedom in the states and abroad. To show its appreciation and support for military personnel all over the country, Harley-Davidson has partnered with ScootinAmerica Founder Adam Sandoval and the Wounded Warrior Project on MISSION: “THANK YOU.” Adam is traveling cross country for the next few months to give away new motorcycles to eight lucky veterans and I got the chance to ask him about his epic ride.

Q: Adam, Why did you decide to get involved with MISSION: “THANK YOU”?

In November 2014 I hit the road with my Chihuahua, Scooter, to visit every Harley-Davidson dealership in the lower 48 states to raise awareness and money for our military and their families. A lot of bikers are veterans, and riding is good therapy, especially for those with post-traumatic stress disorder, or PTSD. Scooter and I rode more than 80,000 miles during our two-year journey and raised $300,000 in donations. It was an amazing experience and I wanted to keep it going.

Q: Tell the readers of The World or Bust more about MISSION: “THANK YOU.”

Scooter and I are on the road with Harley-Davidson to thank those who have protected our freedom. We’ll be honoring a total of eight deserving members of the military with a free motorcycle powered by the new Harley-Davidson Milwaukee Eight Engine.

It’s going great! I’ve had the honor of presenting a new motorcycle to three deserving veterans: Shane Krutchen in San Diego, Ernesto Olivares in Los Angeles and Clifford Baldowski in Tucson. I’ll be making five more stops along the way and I’m looking forward to each and every one of them. It’s great to do this for veterans.

Q: Why did you decide to partner with Harley-Davidson on MISSION: “THANK YOU”?

Harley-Davidson does so much for our veterans and active military. First of all, they offer the Harley-Davidson Riding Academy New Rider Course at a discounted rate for military personnel and first responders and their spouses. There’s also Operation Extend the Ride, which extends factory warranties by the number of days you’re deployed. I’m a Harley-Davidson rider myself, so it was an obvious choice to partner with them for a cause I’m so passionate about.

Q: What are the best ways to get involved with MISSION: “THANK YOU”?

People can go to my website, AdamSandovalRides.com, until early November to nominate deserving military personnel. They can also nominate themselves! Five more military members will be selected by a panel consisting of representatives from the Wounded Warrior Project, veterans working at Harley-Davidson and myself and then surprised with a new motorcycle. The final bike is being awarded in New York City on Veterans Day prior to the world’s largest veterans’ parade. I also urge everyone to share the mission with their friends, follow my American motorcycle road trip on social media and to always listen to the stories of any veterans they know.

Choosing Your Ideal Dirt Bike: A Detailed Guide
Everything You Need To Know About Bike Size