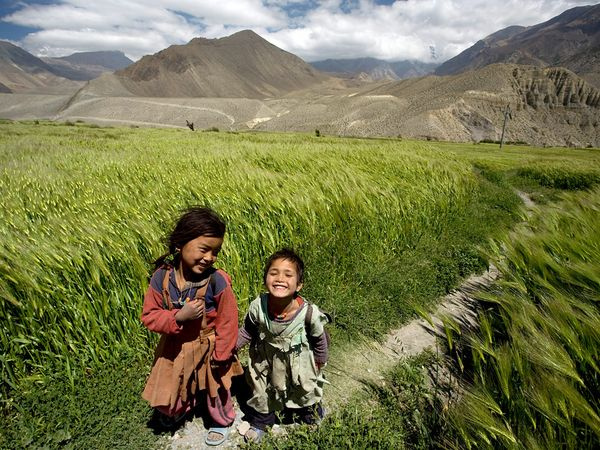 Mustang, formerly known as the Kingdom of Lo, is an unspoilt and beautiful corner of Nepal that few travellers explore, but that those who do never forget. Its name conjures up images of a bygone era, with its previous moniker particularly evocative of the Orient.

One of the things that makes Mustang so special is that until the 1990s, it was completely off-limits to foreigners. Although it’s possible to travel here, many people on trekking holidays in the Himalayas eschew Mustang in favour of the better known routes to the likes of Everest and the Annapurna Sanctuary.

So, what is it about Mustang that makes it so fascinating?

Because relatively few foreigners come here and due to its history of being cut off from the international community, there’s a delightful sense that you’re exploring somewhere secret when you enter the region and start walking.

You’re unlikely to encounter other groups of hikers here, either, as Mustang is not one of the more popular Himalayan destinations. All of this simply adds to the feeling of excitement and discovery, with the chance to really feel as though you’re a million miles from the modern world and all the worries of your daily life.

One of the biggest lures of Mustang is the culture – this is part of Tibet and you’ll really notice the difference between here and other places you may have visited in Nepal. Among the standout features are the Tibetan monasteries that look as though they haven’t changed in hundreds of years.

The small villages you’ll pass are made up of simple, whitewashed houses and the people of Mustang still live very traditional lives. You’re likely to see shepherds out on the mountain slopes with their flocks as you walk, and then no-one else for miles on end. Discovering this largely untouched region is a real delight and interacting with the locals is one of the highlights.

Undoubtedly the jewel in Mustang’s crown, Lo Manthang is a real must when you’re visiting this part of Nepal. In fact, the majority of hikes in the region will be heading for this point – the ancient walled city that was the capital of the Kingdom of Lo.

This has been nominated to become a UNESCO World Heritage Site and you’ll want to have at least a day to explore its winding streets, admire the incredible surrounding wall and discover the various monasteries and temples within its centre.

The Royal Palace is one of the most impressive landmarks here and dates back to around the 15th century. It has five stories, which makes it easy to spot as the other buildings in the town are considerably smaller.

Another reason why Mustang is such an appealing destination for trekkers is that the scenery and hiking is unique – it’s nothing like what you will experience elsewhere in Nepal. The landscape is much more arid and rugged, while the mountains feature stone of varying colours, making them truly beautiful.

This large desert area was once an ocean – the Tethys Ocean, to be precise – and fossils of the amazing creatures that lived here can still be found in Mustang’s rocks and earth. The trekking itself is varied, with steep climbs, amazing views and long downhills among the things you can look forward to.

If you’re looking for a trekking holiday in the Himalayas that will take you well and truly off the beaten track, a trip to Mustang could be right up your street.

Preparing for and walking the Camino de Santiago in Spain: a guide
Ghorepani Poonhill Trek Cost
Best Trekking Holidays for the World Traveller