When you hear the words ‘trekking in Nepal’ the first thing that springs to mind is probably Mount Everest, possibly followed by the Annapurna region. While these might be the most famous of the country’s hiking destinations, they’re certainly not the only ones and I think the Forbidden Land of Mustang deserves to be considered.

Its name alone conjures up images of a bygone age, but although its title sounds imposing, it is an incredibly peaceful and beautiful region of Nepal to visit. In fact, it borders Tibet and one of the things that makes it so appealing is that foreigners were not allowed in this area until the 1990s.

So, if you’re after a real journey of discovery into a Himalayan region that few other hikers have uncovered, Mustang is the place for you. I’ve put together a brief guide below, but you’ll find a more detailed itinerary here. 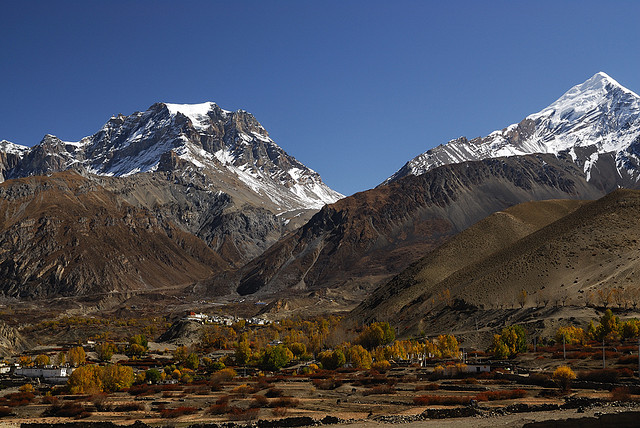 A brief history of Mustang

Formerly known as the Kingdom of Lo, Mustang is in the north of Nepal and borders the Tibetan plateau. It was a powerful independent kingdom for over 200 years from the 15th century, when it controlled the trade routes between India and the Himalayas. In the 18th century, it was annexed by Nepal.

Mustang also had its own royal family and, although the monarchy officially ceased to exist in 2008, the unofficial king and descendents of the royal family still live in the region.

What to expect in Mustang

Trekking in Mustang is a wonderful exploration into a vast desert wilderness, where you will spot nomadic shepherds with their animals on the mountain slopes and few other people unless you are in one of the towns or small villages.

There are towering peaks over 8,000 m high, as well as the deepest canyon in the world. Although the landscape is desolate in some ways, it is vibrant in others – pigments in the rock and soil mean you can see cliffs tinged in red, yellow, brown and blue hues as you walk, with the wind having created interesting rock formations over the centuries.

When you visit the villages in Mustang, you’ll notice they have a distinctly Tibetan feel and Buddhism is a big influence on the people who live in this remote region. The architecture in these settlements is different to what you’ll have seen in Nepal, only adding to the impression that you’re well off the beaten tourist trail.

A real highlight of hiking here is the chance to visit the amazing walled city of Lo Manthang, the capital of Mustang. It is surrounded by 5 m high walls that are adorned with colourful prayer flags that flutter in the breeze.

Many of the homes here are simple, with white walls and firewood stacked up on the roofs. The central palace stands out due to its size, while the temples and monasteries are worth exploring in detail. These ancient places of worship are decorated by intricate frescoes that contain an incredible amount of detail – take your time to admire them during any temple visits.

Generally speaking, the trekking in Mustang is not as strenuous as in other regions of Nepal, but that’s not to say that it’s easy. You’ll have long days of walking during your trip, as the villages tend to be several hours apart, while the barren and open landscape means you should make sure you wear clothes that will protect you from the wind.

Conditions underfoot are typically dry and you will follow paths that have been trodden by shepherds and travellers for centuries. You’ll be more than 3,000 m above sea level for the duration of your trek – and will reach around 4,000 m on some of the mountain passes. The high altitude can be a problem for some people, so make sure you take things slowly and hike at a steady pace to avoid over exertion.

Unearth the charm of the Smoky Mountains
Why the Lake District Provides Something for Everyone
Preparing for and walking the Camino de Santiago in Spain: a guide