Officially Ho Chi Minh City, known by everyone as Saigon, is a massive city in the south of Vietnam. Being it my 2nd trip to southeast Asia, I figured I better see some more than Thailand and the Philippines, so Vietnam sounded like a good option; it was, and wasn’t.

Hold up, hold up. While there are some definite cool attractions, fun things to do (like getting your ears cleaned), and a unique culture to experience, Vietnam is worthwhile, but after coming from Thailand, in my opinion, it was incomparable. Here’s why I liked and didn’t like Vietnam.

Liked: The Interesting Culture and History

If you’ve read my blog a bit, you know I’m pretty interested in history, architecture, etc. Maybe it’s because I’m an American and there isn’t too much older than a couple hundred of years in my own country, and especially nothing too historic in Miami where I rest my suitcases when not on the road.

Vietnam has quite a storied history, and what attracted me the most was the French colonial period which lasted from 1887 to 1954 when the country was known as, French Indochina (and Ho Chi Minh City was officially Saigon). From the second you leave the airport, you can feel a Paris-esque vibe with tree-shaded, wide avenues, large roundabouts and crumbling colonial buildings (The French tried their hardest to make Saigon feel like “home”).

You can wander around for a few days and admire many fine displays of French architecture with an Asian spice. My favorites were the Opera House, Central Post Office (designed by none other than Gustave Eiffel himself), Ben Thanh Market and the Art Deco buildings you can see scattered around the city. 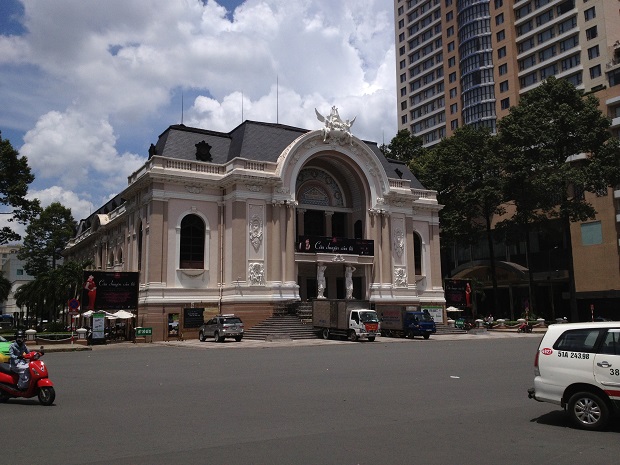 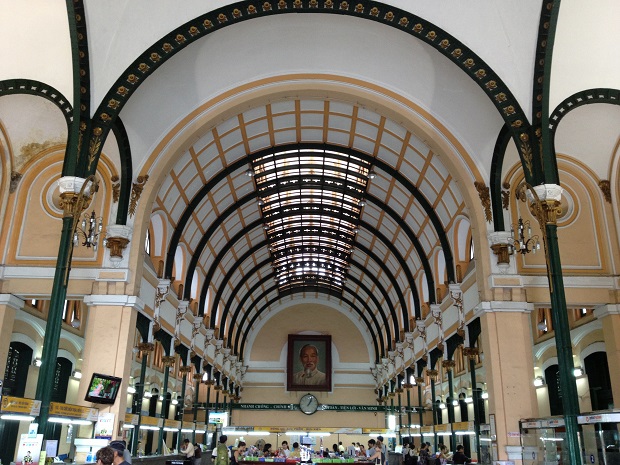 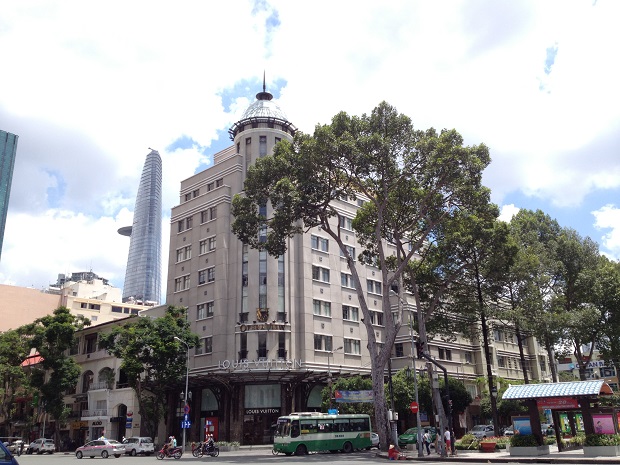 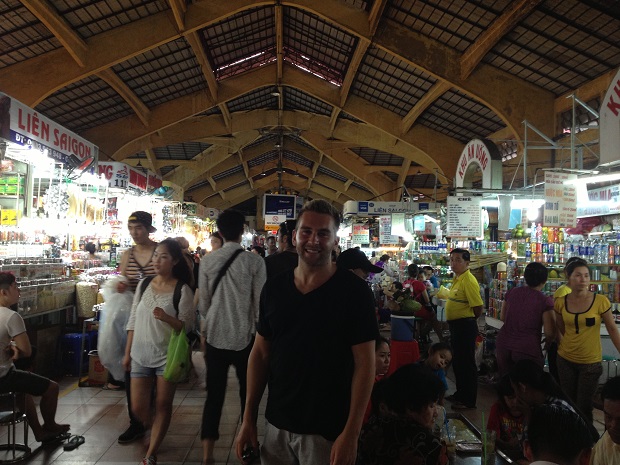 There is a surprisingly large cafe culture in Vietnam and while there are a bunch of western style coffee shops (pretty unique for a communist country), there are even more coffee shops that sell Vietnamese coffee which is basically 1 part crude oil, 1 part sugar and 1 part condensed milk. My favorite coffee shop I visited was L’usine on Le Loi street in the center of town. It has a hipster clothing store downstairs and and even more hipsterific coffee shop upstairs, biggest perk there is the solid Wi-Fi.

Another place you need to go while visiting Saigon is the War Remnants Museum. Being that I was an American, I figured it necessary to learn a bit more about the Vietnam War… Or, The War of US Aggression as it’s referred to in Vietnam.

From the outside, the museum looked pretty promising with some pretty bad ass tanks, planes and helicopters, but when I walked inside, I instantly felt a different vibe. The museum wasn’t there to give an unbiased view of the war, it exists to show the horrors that the US inflicted on the people of Vietnam, and the sad truth is, the lion share of them are probably true. Between the widespread use of Agent Orange (a horrible chemical that left generations of people in Vietnam disfigured, and still continues to do so), to the killing of innocent women and children, the Vietnam War was pretty F’ud up. This was the first time I’ve ever been to a place and felt completely horrible being an American. I now know what Germans probably feel like when going to a Holocaust museum, and it ain’t good.

Before motorbikes were around (the motorbike traffic is unbelievable in Vietnam, watch this if you don’t believe me), I’m sure it was a fantastic city to enjoy a carriage ride, but now a days, it’s pretty unbearable to be on the road or sidewalk, especially with the incessant honking of horns.

There are next to no traffic lights and if you need to cross the road on foot, you just start walking and hope the sea of motor bikes just flows around you, which it actually does. 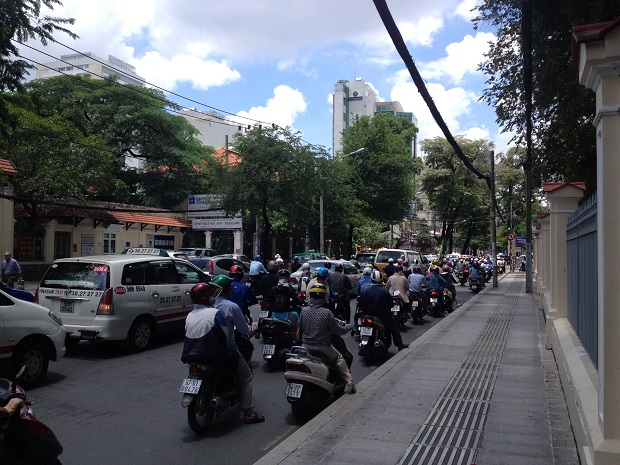 Liked: The Food (Sort of)

I hate to say it, but for the most part, any place I go these days, I find that same cuisine done in a western country to be more tasty. Maybe it’s the quality of ingredients? But I have to say, a lot of the street food in Vietnam is pretty nasty (nothing like Thailand). For a good clean meal, you’re better off going to a restaurant, but one experience you have to have in Vietnam is plopping down on a little plastic seat on the sidewalk with the locals and enjoying a big bowl of Pho, a broth based soup with noodles and beef or pork (best hangover cure out there).

My favorite  food I discovered in Vietnam though was Banh Mi, the Vietnamese sandwich. The French influence is really felt on this one as a Banh Mi is made with a fresh airy baguette (the bread in Vietnam is fantastic)  cold cuts, cilantro, carrots, cucumber, chilies and often a spicy sauce too. You’ll see lots of vendors selling these in the streets and especially at night when they taste stupendous after a few Saigon beers (one of the local brew ha has). 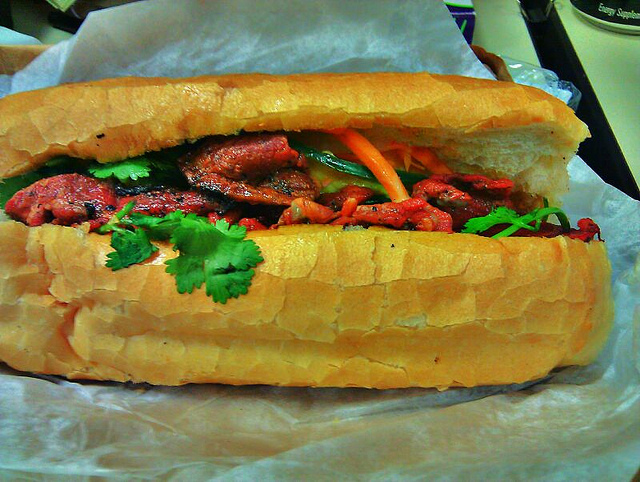 After coming from Thailand where I spent a few weeks, I can pretty safely say that it would be hard to follow up the nightlife there anywhere in the world. The nightlife in Vietnam though is for the most part, pretty weak. Saigon was ok, but I went to two other places, Da Nang, another large city and Hoi An, a touristy historic town near Da Nang and both were poop.

Maybe it was withdrawal from the amount of attention I got in Thailand as a slightly above average looking white man, but, I was not impressed. There were some clubs that appeared good upon entrance, but every place I went to, I was escorted by at least 2 or 3 waiters to a “table” (upright bar style table) and pestered to order bottles or continue buying beers. If you left your little designated 4 sq ft, you were followed by a server. It made it virtually impossible to try and talk to anyone, let alone dance with big brother always watching you. FAIL.

All in all, Vietnam has plenty of enjoyable things to do for a week or two, but you have to remember it’s a communist country so things don’t happen as fast as you might be used to and might not be up to your western standards. I was there for a week and was ready to roll on my 7th day, but, it was definitely interesting and I’m happy I went.

The World's Best Bars: Bar Marsella in Barcelona
5 of The Most Amazing Libraries in The World
Top Tourist Attractions In the Czech Republic