Firstly, I just want to establish that this is not a sponsored post. This is my genuine review of a tool I’ve discovered a few months back and it’s consistently been awesome enough that I’m ready to share it with you all, the ITA Flight Matrix. While it might look rather unassuming, and something even I could have designed in Microsoft Paint, this little puppy is powerful.

The company that produced the flight search engine is ITA who was absorbed by Google a few years back to help them develop their own flight search capabilities. Before Google bought ITA, they were producing the flight search engines for companies like Orbitz, Air Canada and Fly.com (and still do). What is cool about ITA is that they make their flight matrix available to the public, and by using it, I was able to score a dumbly cheap flight direct from Fort Lauderdale, FL to Frankfurt, Germany for $330! Got a flight from Prague to Montreal for only $550 as well. 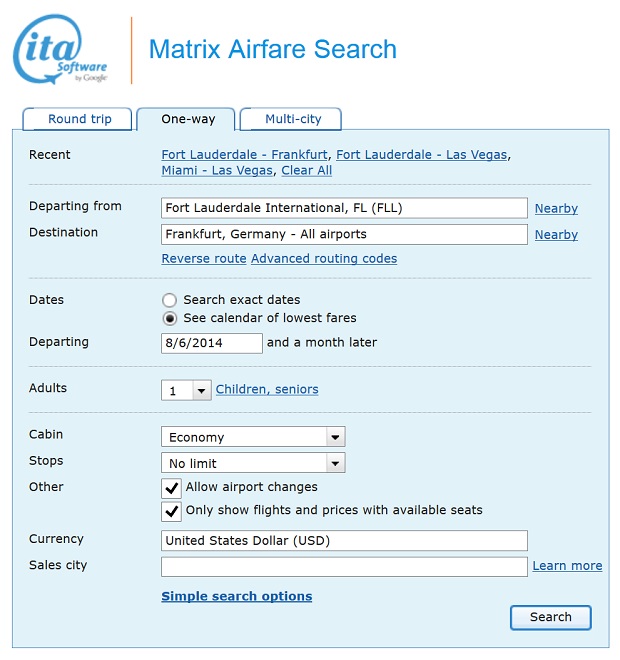 Basically, what is nice about the flight matrix is you can choose your start destination and end destination, choose a date that you think would be ideal and then select the option for “See Calendar of Lowest Fares”. 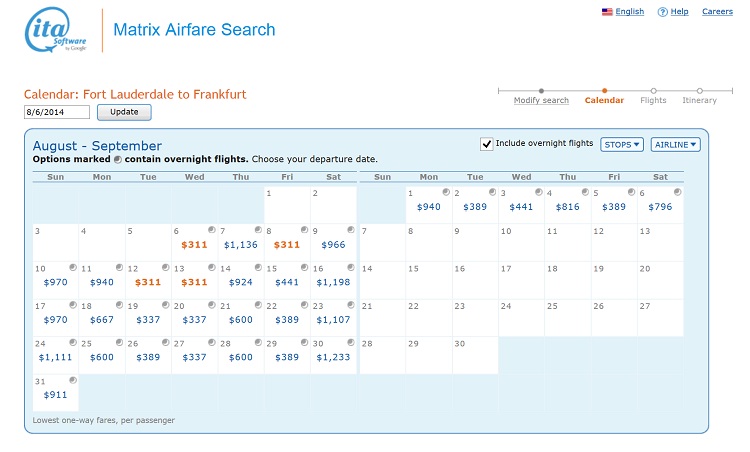 For someone like me, this is priceless as I usually don’t have a super rigid schedule, so as you can see above, I can fly a day early or late from my desired date of August 7th to save…$825! This is also a great tool if you’re flying from the states to Europe as you can search for your closest airport to home and then do independent searches for all the major European cities in the vicinity of where you might want to go. Once in continental Europe, just take the train or a discount airline to wherever you desire to be. For example, say you’re leaving from Philly and want to end up in Spain. You might be able to score a cheap flight to London and then you can just take Ryan Air or Easyjet (discount European airlines) to Madrid for less than a hundred bucks.

There are similar tools out there, but I haven’t seen one work as well as this one. Even though my flight from Ft Lauderdale to Frankfurt ended up being about $20 more than was listed above, it was still dirt cheap and other searches were more accurate.

Have fun playing around on this one!

3 days in Chi-Town!
How to get to Asia on the cheap!
Are Camcorders a Thing of the Past?