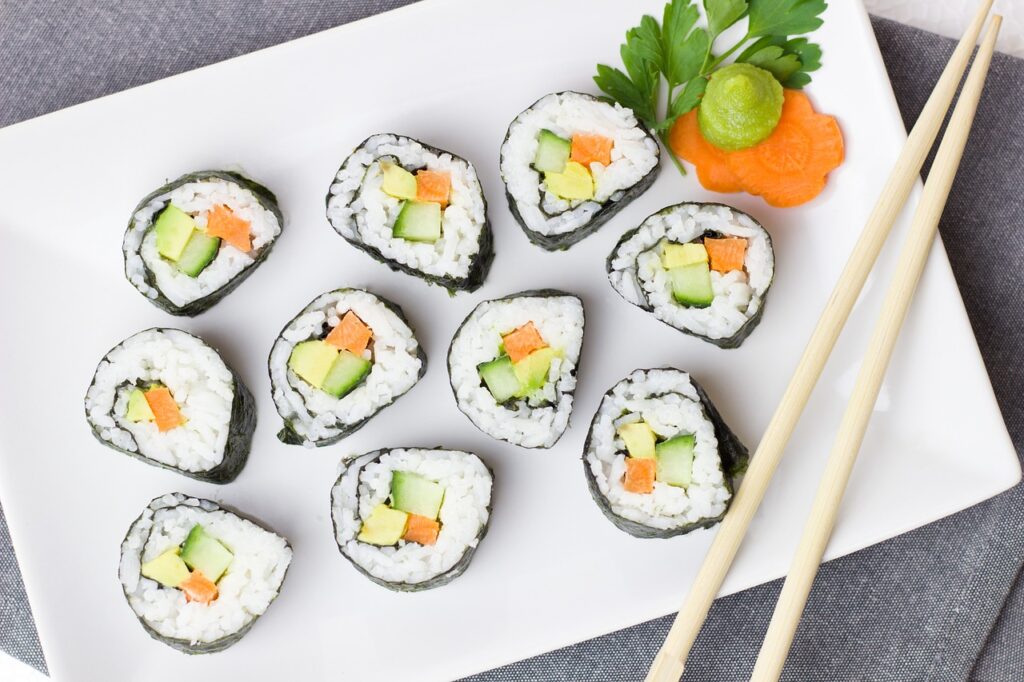 People hear the word sushi and immediately think of raw fish, but there are many types of sushi out there that do not involve any fish at all. They get their ‘fishy’ taste with the use of nori seaweed wraps which is a plant-based natural seaweed allowing vegan sushi to have an authentic fish taste.

Inari tacos are easily made vegan with the simple switch to a vegan mayonnaise sauce and vegetables such as cucumbers and avocados made great additions to seaweed wrapped sushi rolls.

Traditional Japanese tempura batter is made with egg flour and iced water. The addition of the egg makes the batter not naturally vegan, but a batter can also be made without the egg and using sparkling water instead of still water This gives the same delicious crispy result.

Often Japanese tempura involves fried king prawns but there are many other things that can be battered with tempura batter, and these include roasted aubergine, courgettes, and sweet potato. Oyster mushrooms fried in a tempura batter make a very good calamari substitute with the meaty texture of the mushrooms giving a likeness to that of squid.

There are so many vegetables that work well in a yaki soba dish and so you do not lose anything by omitting the meat part of it. If you wanted to you could add fried tofu cubes to the dish in place of meat.

Vegan katsu curry is one of the most popular dishes in Japanese restaurants with even non-vegans opting for the tasty alternatives. Katsu curry sauce is naturally vegan but the katsu element, that is the breaded cutlet, is usually a meat such as pork or chicken.

To make the katsu element vegan, the cutlet of meat can be switched out for a cutlet of a vegetable such as sweet potato, this brings a lovely sweetness to the curry, and added flavour. A meat substitute called seitan also works well when fried in breadcrumbs and covered in a Japanese curry sauce. Seitan is made from wheat flour and has some of the texture of meat without an overpowering flavour. These options make for a great alternative to a traditional katsu curry.

Sashimi is thinly sliced and rolled raw fish so it seems a little extraordinary that this dish can be made vegan but thanks to some clever combinations a food company has made a vegan alternative to sashimi.

Using tapioca starch for texture and seaweed for flavour the vegan version of salmon or tuna can be bought in thin slices and rolled to resemble fish sashimi. It Is said to be surprisingly close to the classic in both flavour and texture and can be served with radish, picked ginger and soy sauce just as the non-vegan version would be.

Classic ramen is a wheat noodle soup dish that is made up of a liquid broth made with meat or fish stock and then topped with scallions, soy sauce, miso, and slices of a meat such as pork. Whilst not traditionally vegan it is simple to turn a classic ramen dish into a vegan ramen.

Vegetable stock can be used as a base for the noodle soup rather than meat or fish stock and nori seaweed can be added if a fishier flavour is preferred. Mushrooms made a great replacement for the meat element of the dish as their texture has a meatiness to it and they absorb the flavours of the dish well.

Ramen is generally quite a spicy dish with lots of chillies, and vegetables such as spring onions in it and this flavour is all naturally vegan meaning that a vegan ramen has the same punch as a non-vegan one.

Hirata buns are Japan’s answer to the Chinese bao bun and are popular in Japanese restaurants due to their cloud-like fluffy exterior and flavoursome fillings. These bamboo steamed buns are generally filled with pork or another meat mix as well as a sauce such as a siracha mayonnaise.

The steamed bun itself is vegan but In order for this classic dish to be vegan the filling needs to be switched for a vegan alternative. This could be fried aubergine slices alongside a few slices of oyster mushrooms. The mushroom gives the filling a meaty texture and the aubergine adds flavour and interest to the dish. Siracha mayonnaise does come in a vegan variety which mirrors the original but without the need for egg in the ingredients.

Whilst a lot of classic Japanese dishes have vegan alternatives it can still be useful to know which Japanese cuisine ingredients are naturally vegan, so that if the place you are eating at doesn’t have any specifically made vegan dishes you are still aware of what is suitable.

Feed Your Emotions With These Soul Food Classics
Where To Find The Best Bbq In The Midwest
The Best of All Worlds - Ghent Belgium!