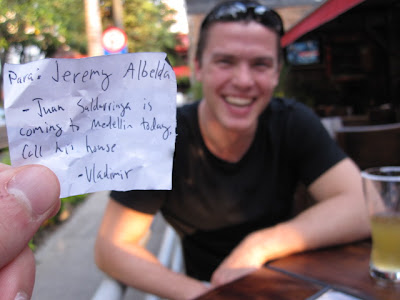 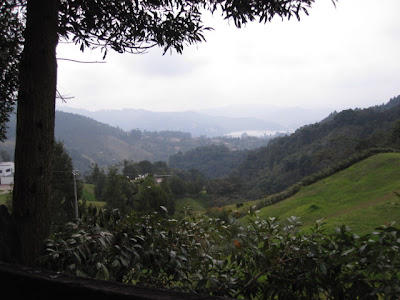 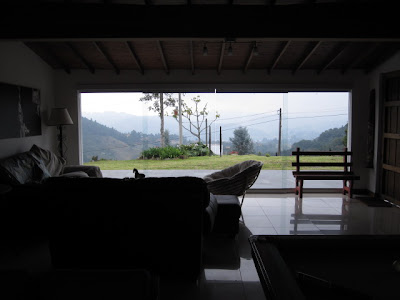 After a long day of travel, I arrived at the hostel that Vlad (my friend from college) told me he’d been staying since he got to Medellin 4 days earlier. I arrived  via taxi through some of the most beautiful mountain countryside I’d ever seen. It was so green and tranquil looking that it’s hard to believe just a little more than a decade ago this place was controlled by narcoterrorism. Well, when I walked up to the front desk, I saw on the computer that Vlad had already checked out..Hmmm I then looked next to the receptionist’s hand to see a little ripped piece of paper with my name on it…”Call Juan”. Starting to feel like I was staring in Blow 2, I asked for the phone to call Juan, who in reality is actually our friend from college who was supposidly going on a cruise. “Yooo Brooo, I decided at 2 AM last night that i’m coming home and I’ll come get you in 30 minutes” (he’s from Medellin).  I ordered a beer and sat myself on the nice outdoor porch. A quick glance around at my company and its what I had expected. Mostly grungy Aussie backbackers, a shirtless yammering Irish man, and a middle aged man in all black with aviators drinking an aguila(beer). Two tables across from me was a rather small man with a soccer jersey, glasses, and a Phillies hat. Not paying much attention, he rose from his chair and walked over to me, hesitantly saying “Do I know you?” Ummmmm….thinking as hard as I could, it came to me, It was Jason from my high school! “you gotta be fucking kidding me” I blurted. Well to make a long story short, He told me he had finished college in 3 and half years at Pitt and like me, has a weird obsession with Latin America. He had already been four or five times and he said this escape was going to be without an expiration date. I asked how he was financing such an ambitious journey. He told me all those times he was so quiet in high school was not because he was anti-social or depressed, but rather he was pondering ways to take advantage of the emerging world of internet sales. He made his own website in high school called buysomethingawesome.com that made him some money and he had been tinkering for the past five years until he realized a new brainchild, a career consulting service where he writes and revises resumes, does cover letters, and offers mock interviews on skype. He can now live anywhere and work from any computer, something he defined as “locationless living” Jason said he was actually making serious loot. It was a pretty inspiring encounter and just another reason that if you truly want to be successful you have to step up, take accountability, and be the master of your universe. He’s 22 and does exactly what he wants to do.

Well about an hour later, Juan showed up with Vlad at side. We went for a few more Freddie Brewgers at a local bar at which Juan and I downed a bottle of Aguardiente (translates to fire water…) Juan then brought us over to his parent’s apartment which was absolutely insane, it looked like something out of MTV cribs. His parents were super nice and even had us for a quick meal that their maid (who responds to a bell) whipped up in a flash. After dinner, Juan said we should go stay at his uncle’s house in the mountains and check out the countryside the next day…sold. the house was gorgeous with huge glass panel walls and panoramic views from every corner. I actually write from the front patio looking out onto a gorgeous lake sunken into the distant hills. I haven’t heard a natural silence like this for months and I have to say, I could really get used to it…