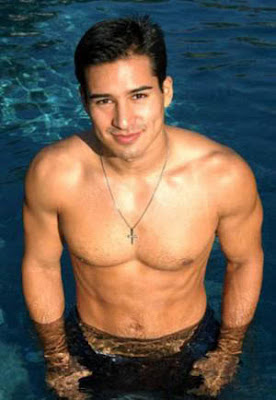 So after a few glasses of wine and nothing better to do then read my old highschool english files, I found this…..A Eulogy I wrote in 2005 on anyone I wanted to for English class, pretty morbid if you ask me. Mario Lopez’s vitality intrigued me…

Today we mourn the death of Mario Lopez. He grew up too fast and now his reign over weekday afternoon television has come to a close. There will always be a special place in all of our hearts for the corky meat head from Saved by the Bell, second- rate bicycle cop from Pacific Blue, and the way to qualified host of Pet Star on Animal Planet. Let me not forget to mention his four star performance in the made for TV movie, Breaking the Surface: The Greg Louganis Story. Mario seemed to just exude talent, it is just a shame that the producers of Pet Star agreed to have a guest and their pet grizzly bear on the show. Bear experts were called in on the scene to find out why “Jimbo” attacked Lopez for no reason, and they replied “what would you do if a little man with a tight shirt was throwing dog treats at you your entire bit and refused to acknowledge your talent as good enough to be on the show?”. Those damn producers. I’m sorry, we are here today to look back and reflect on the good times in Mario’s life, not the unfortunate.

We were all introduced to Mario Lopez (A.K.A. A.C. Slater) the loveable, muscular, and hopeless romantic in 1989 on the new hit show Saved by the Bell. The son of a military man, Slater could never really catch a break at home, so he felt he needed to front the macho man image at school. Lovelorn and longing, A.C. pursued the beautiful intellectual bombshell, Jesse Spano (Elizabeth Berkley from show girls). Slater asked Jesse out and they began dating. They fought a good amount, but everything was alright in the end. Saved by the Bell aged with the cast and by 1993, it was time for college. The producers decided the story just couldn’t end at the conclusion of high school, so someone had the ingenious idea of creating the masterpiece, Saved by the Bell, the College Years. The epic story continued for one more season until the red giants faded to white dwarves and the youth of the late 1990’s had no more room for 30 year old role models.

Mario’s influence will persist for as long as there is an insecure, acne ridden teenager in front of the TV after school, a lonely house wife with California dreams of strong Latin bicycle cops, and middle-aged adults with the hope that one day that their poodle will bark some discernable English phrase. Mario’s smile is that warm feeling everyone gets when reminiscing about days past. The lord decided it was his time to go, but we will never let go of our sweet, sweet Mario.